Dr. Valiya Mannathal Hamza is an Indian/Brazilian scientist credited with co-discovering, together with Elizabeth Taveres Pimentel . , the "Rio Hamza" or Hamza River which runs underneath the much more well-known Amazon.
Hamza is listed as a Permanent professor in the Geophysics specialization at the Brazilian National Observatory.

Hamza did his undergraduate and postgraduate studies from University of Kerala in 1960s. He started as a Senior Scientific Assistant at the National Geophysical Research Institute in Hyderabad, India in 1966. He moved to University of Western Ontario,Canada for his PhD in 1968 . and subsequently went to Brazil in 1974.

The Hamza River (Por., Rio Hamza) is, or seems to be, a slowly flowing aquifer in Brazil, approximately 6,000 kilometres (3,700 mi) long. Its discovery was announced in 2011. The River Hamza was named in honour of scientist Valiya Mannathal Hamza, of Brazil's National Observatory, who has undertaken research on the region for four decades. 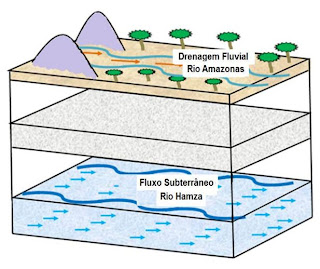 Valiya Hamza of Brazil’s National Geophysics Observatory says there are indications of a 6.000 kilometers long subterranean river located 4.000 meters below the surface.
The finding came from studying temperature variations at 241 inactive oil wells drilled in the 1970s and 1980s by Brazil’s state-run oil company Petrobras in search for hydrocarbons.

Hamza says the thermal information allowed his team of researchers to identify the movement of water under the Amazon River.

The flow of the underground river which follows a similar contour to the Amazon has been estimated at 3.000 cubic meters per second.
This however is considered a mere 3% of the Amazon river flow which is born in the Peruvian jungle and empties in the Atlantic Ocean, to the extreme north of Brazil and is catalogued the longest in the world with 6.800 kilometers.
Hamza says the thermal information allowed his team of researchers to identify the movement of water 13,100 feet under the Amazon River.

Scientists agreed to name the underground river Hamza in honour of the Indian researcher Valiya Mannathal Hamza who has been studying the region for over four decades.