Zaheer Khan  (Marathi: झहीर खान, Hindi: ज़हीर खान born 7 October 1978, Shrirampur town in Ahmednagar district, Maharashtra), is an Indian cricketer who has been a member of the Indian cricket team since 2000. A left arm fast bowler considered as the best of the Indian fast bowling attack, Zaheer is known for his ability to swing the ball both ways, and as a batsman also holds the record for the highest Test score by a No. 11. After leading the Indian pace attack for much of the early 2000s, recurring hamstring injuries in 2003 and 2004 forced him out of the team, and after returning for a year, he was dropped again in late 2005. Strong performances on the domestic circuit have seen him recalled to the team as its leading pace bowler. Zaheer can also use reverse swing. 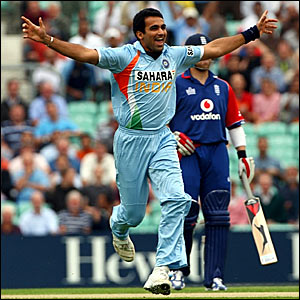 Zaheer was selected in 2000 for the first intake of the National Cricket Academy in Bangalore. He made his Test debut against Bangladesh and ODI debut against Kenya during the ICC KnockOut Trophy in the same year.
In late 2005 pacemen Shanthakumaran Sreesanth and R. P. Singh made their international debuts and became regular members of the Indian team making it difficult for Zaheer to retain his position in the playing eleven. The Board of Control for Cricket in India demoted Zaheer from a B-grade to a C-grade contract at the end of the year. He returned for the 2006 tour of Pakistan, where India fielded three left arm pacemen and had difficulty dismissing Pakistan with a lack of variety in the bowling attack. Zaheer, with inferior results to those of Irfan Pathan and Singh, was dropped.

In Indian domestic cricket, Zaheer made his name playing for Baroda. In the 2000/01 Ranji Trophy final against Railways, Zaheer was Man of the Match with eight wickets, including a second innings haul of 5/43, in Baroda's narrow 21-run victory. He transferred to Mumbai at the start of the 2006-07 Indian cricket season his debut for Mumbai until the final of the Ranji Trophy in which he took 9 wickets as Mumbai defeated Bengal.
In 2006 Zaheer signed for Worcestershire County Cricket Club in England as one of their two overseas players, replacing Shoaib Akhtar. Although Worcestershire went on to lose the match, Zaheer took ten wickets against Somerset on debut, in doing so he became the first Worcestershire player to take 10 wickets on debut for over 100 years.In June he took the first nine wickets to fall in the first innings against Essex, ending with 9-138; had wicket-keeper Steven Davies not dropped a catch offered by last man Darren Gough he would have become the first bowler ever to take all ten for the county.
Late in 2006, Zaheer was recalled to the Test and ODI team for the tour of South Africa, following Irfan Pathan's slump in form and an injury to Munaf Patel. After consistent performances on tour, his performance in early 2007 in home ODIs against the West Indies and Sri Lanka, including a career best 5/42, saw him named in the squad for the 2007 World Cup. He has taken 271 ODI wickets at an average of 28.83 runs per wicket taking 4 wickets in a match 6 times (4 times against Zimbabwe) including 32 wickets against Zimbabwe at an average of 17.46 runs per dismissal. He, along with other seamers like Javagal Srinath and Ashish Nehra helped India to make it to the finals of the 2003 World Cup. Zaheer finished the tournament as fourth highest wicket-taker ‐ 18 wickets from 11 matches at an average of 20 runs per wicket.
Zaheer was the mainstay of Indian bowling attack during the side's victorious 2011 World Cup campaign. He was the leading wicket-taker in the tournament, joint with Pakistan's Shahid Afridi on 21

Zaheer has taken over 250 Test wickets at an average of just over 33 runs per wicket. In 16 matches from the beginning of the tour of West Indies in April 2002 to the end of the 1st match against Australia in December 2003, Brisbane, Zaheer took 54 wickets from 16 matches at an average of 30 runs. It all turned downhill after the first Test against Australia in Brisbane in December 2003. Having taken 5 of the top 7 Australian batsmen in the first innings (5 for 95), he injured himself in the second during the opening spell. After missing the second Test he returned for the third, but was injured midway through the match and was forced to return home. The injury kept him from the early 2004 tour of Pakistan, India's first Test series victory in the country.
Zaheer holds the world record for the highest Test score by a number 11 when he scored 75 against Bangladesh in 2004. At the time he was batting with Sachin Tendulkar; the pair amassed 133 runs, a new record for India's tenth-wicket.