Omar Abdullah (Hindi: उमर अब्दुल्लाह, Urdu: عمر عبدالله), born 10 March 1970 in United Kingdom, is an Indian Kashmiri politician and the scion of Kashmir's 'first family', the Abdullah family who became the 11th and the youngest Chief Minister of Jammu and Kashmir after forming a government in coalition with the Congress party, on January 5, 2009.
yes he was a member of 14th Lok Sabha, representing Srinagar constituency of Jammu and Kashmir, India. He was a Union Minister of State for External affairs in Atal Bihari Vajpayee's NDA government, from July 23, 2001 to December 23, 2002. He resigned from NDA government in October 2002 to concentrate on party work. Prime Minister tried to convince him to continue his work. However, on 23 December 2002 his resignation was accepted by President A P J Abdul Kalam.
Omar joined politics in 1998, as a Lok Sabha member, a feat he repeated in subsequent three elections and also remained a Union minister; he took on the mantle of National Conference from his father in 2002, though he lost his own seat of Ganderbal during the 2002 state assembly elections, and so did his party, the political mandate; four years later, he fought once again from the very seat and won in the 2008 Kashmir Elections.

Omar Abdullah was born 10 March 1970. He is the son of Farooq Abdullah and grandson of Sheikh Abdullah, all three of whom have been Chief Ministers of Jammu and Kashmir. His mother Mollie, a British Christian, and a nurse by profession, was not in favor of him joining politics. He studied at the Burn Hall School, Srinagar and then at Lawrence School, Sanawar. He is an alumnus of Sydenham College, Mumbai (where he did his B.Com.). After that he joined the University of Strathclyde, Scotland, for an MBA, although he did not complete it.
He married his own wife, daughter of an Army officer, Major General Ram Nath from Delhi  on September 1, 1994, and the couple have two sons, Zahir and Zamir, hence. They are currently separated.  His younger sister, Sarah Abdullah is married to Sachin Pilot, son of Rajesh Pilot. He has been criticized by many for violating the Muslim Personal Law which barrs Muslims from marrying non-Muslims. Before joining politics, Omar Abdullah worked with ITC Limited in its International Business Division. He was posted in Hyderabad and Mumbai. In 1998, at the age of 29, Omar Abdullah was elected to 12th Lok Sabha, becoming the youngest minister. In 1998-99, he was a member of both the Committee on Transport and Tourism and the Ministry of Tourism's Consultative Committee. In 1999, he was re-elected to 13th Lok Sabha (2nd term). On October 13, 1999 he took oath as Union Minister of State, Commerce and Industry. On July 22, 2001, he became the youngest Union Minister, when he was made Union Minister of State for External affairs. He resigned from the post on December 23, 2002, to concentrate on party work.
On June 23, 2002, he became the President of the National Conference party, replacing his father, Farooq Abdullah.
He lost his Ganderbal seat in the Kashmir assembly elections held in September–October 2002.
Abdullah was re-elected as the National Conference party's president in 2006.
In March 2006, much to the disapproval of the centreOmar Abdullah had a one-on-one meeting with Pakistan's president, Pervez Musharaf, in Islamabad. This was the first meeting of its kind between a mainstream politician from Jammu & Kashmir and the Pakistani government, thereby re-enforcing Omar's growing commitment to the solution of the Jammu & Kashmir cause. Omar received a rousing reception by thousands of Kashmiris upon his return. 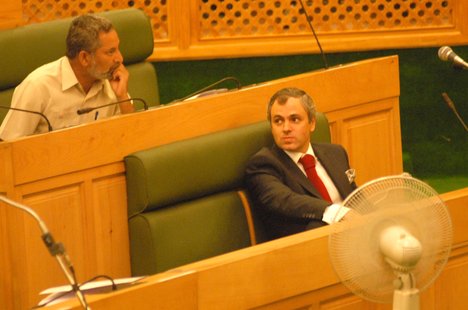 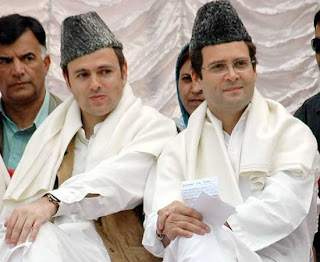 On July 9, 2007, Omar escaped a bid on his life when suspected militants threw two rifle grenades targeted at him. The incident happened when Omar was interacting with party workers at a party leader's house.

On July 22, 2008, Omar gave a passionate speech during the 2008 Lok Sabha vote of confidence, which was praised by almost all quarters, and even won him fans on the internet. He was also seen briefly, playing himself, in director Apoorva Lakhia’s film, Mission Istanbul (2008), based on international terrorism.
After the 2008 Kashmir Elections, the National Conference won the maximum number of seats, and formed a coalition government with the Congress party, and Omar was sworn in as the 11th Chief Minister of Jammu and Kashmir on January 5, 2009 at the General Zoravar Singh Stadium in the University of Jammu, Jammu, raising hope amongst the people of Jammu and Kashmir who had been reeling under insurgency and violence since 1989.
Omar Abdullah on 28 July 2009 submitted his resignation to Governor Narinder Nath Vohra over sex scandal allegations against him by the opposition PDP. His resignation, however, was rejected by Governor Vohra.

Most notable among his criticism is his personal involvement in the infamous sex scandal of 2006 in Kashmir. The allegation was made in the State Assembly by the opposition party PDP including its president Mehbooba Mufti and former deputy Chief Minister Muzaffer Hussein Beigh in 2010. Omar offered to resign if proven guilty. He has also been accused of taking kick-backs amounting to 400,000,000 Indian Rupees in one of the prominent power projects in the State. Of late, he was accused of ordering the killing of one of his party-workers and a close associate of his father - Syed Mohammad Yousuf, who was beaten up in his house. The victim was reportedly involved in cash-for-position scam worth few crore rupees. There have been demands of his resignation ever-since.
After Abdullah assumed the office of Chief Minister on 5 January 2009, the human rights situation in Jammu and Kashmir deteriorated. Within his first six months in the office, Indian Paramilitary Forces, specifically the Central Reserve Police Force, were accused of killing at least fifteen civilians, including three women whom they were also accused of raping. The first killing took place barely a few hundred meters away from the residence of Omar Abdullah, only two days after he was sworn in as Chief Minister of the state. The victim, Abdul Rashid Rishi, 45, a deaf man from South Kashmir’s Pahalgam, was shot dead by the Central Reserve Police Force on January 7, 2009. The killings at Bomai, Khaigam, Baramulla and the rape and murder of two young women in Shopian invoked severe public anger, and resulted in valley-wide protests, and reiterated demands for freedom and removal of Indian Paramilitary Forces from Jammu and Kashmir.
In the subsequent days, hundreds of protesters, including opposition leaders, were beaten up, and many were arrested or detained under a controversial Public Safety Act. On 8 July 2009 alone, PTI reported that "...police has arrested over 320 people..." who according to police were "fomenting trouble". Police slapped minor charges of disturbing peace to serious offences like that under section 307 (attempt of murder) on those arrested. An editorial in Greater Kashmir noted about this situation that "...ever since the new government took over the state administration has not only been handling every situation ineptly but also ridiculously... (administration) has been detaining and slapping Public Safety Acts against the voices of dissent and disagreement on absurd and ludicrous grounds that have made it a laughing stock within and outside the state...". According to official statistics, 554 persons were detained under PSA in Jammu and Kashmir from January 2008 to August 2009. Ironically, the Law and parliamentary affairs minister, Ali Mohammad Sagar said that invoking of PSA is necessary for running the affairs of the State.
Omar Abdullah was also accused of covering up the rape and murder of two young women in Shopian, which was allegedly perpetrated by Indian Paramilitary Forces. Many regarded this as Abdullah's first failure, as even moderates felt Abullah had bowed to pressure from New Delhi. A. G. Noorani, a prominent lawyer and a commentator on regional affairs stated that Abdullah "needed prodding by the Centre even to order registration of a First Information Report... this testifies the gravity of Omar Abdullah’s lapses... (and) reveals the mindset that he will follow the tradition firmly established by his father, Farooq Abdullah..."
Conversely, there have been claims that the two women who were found dead were not raped and/or murdered. The CBI has said in its chargesheet filed before a court in Srinagar that Aasiya was a virgin and that both women drowned. The CBI investigation has declared that doctors in the district hospital had fiddled with the port-mortem report and fabricated evidence to implicate the security forces. However, majority of media opinion and that of the public is against this view, who regards this defense as a mere cover-up for the case. The case is still ongoing.
Taking a sharp dig at Omar Abdullah’s claim on micro-blogging site Twitter that not a single innocent person or minor from Kashmir was behind the bars, Hurriyat Conference (G) chairman, Syed Ali Shah Geelani said the chief minister had “surpassed Nazi propaganda minister Joseph Goebbels in dissipating lies.”
Many also accuse him of being a non-serious politician. He has been pictured playing with his i-Pad during important meetings and assembly sessions. Having inherited political power and legacy from his grand-father, even some of his cabinet colleagues including Mustafa Kamal and Ali Muhammad Sagar have publicly criticized him for naive attitude.


Misdemeanors and/or cases of abuse of power/ corruption

Mr Abdullah was accused of using the state helicopter for personal use costing the exchequer to the tune of INR 120 million (USD 2.6 million). It was brought to light by the state government's civil aviation departments in response to a RTI application filed by a local resident. Opposition parties, without exception, criticized this rank abuse of authority where Abdullah used the scarce resource of the state to ferry him to different picnic destinations of the state- a state which is considered as one of the poorest in India.