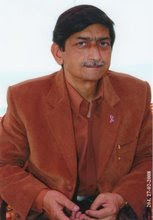 
Dr. Mohammad Aslam Parvaiz, who has a doctorate in plant physiology from Aligarh Muslim University, is currently Principal of Zakir Husain College (Delhi University). He is a science communicator working on the interface of Science & Islam and has five books and more than 350 popular science articles to his credit. He heads the Islamic Foundation for Science and Environment (India). He is founder and editor of Urdu Science, India’s first and only Urdu language popular science & environment monthly magazine published since 1994. He has contributed chapters to books and encyclopedia, including “Islam and Ecology” published by Harvard University Press and “Encyclopedia of Religion and Nature” published by Continuum Publishers, U.K. He has been invited to deliver lectures on Islam by universities like Harvard, Yale and Toronto, besides many other Institutions and Organizations across the globe. He was awarded an “International Visitor-ship” by the U.S. Government in 1995.

Dr. Mohammad Aslam Parvaiz, Principal Zakir Husain Delhi College (Delhi University) has a doctorate in Botany. He is the Founder Director of registered charity "Islamic Foundation for Science & Environment"(IFSE), New Delhi, India, which is working on the interface of Science, Environment & Islam. He is the Founder & Honorary Editor of a popular science & environment monthly magazine "Urdu Science" Published since Feb. 1994. He has four books and more than 300 articles to his credit. He was awarded
International Visitor-ship by U.S. Govt. in 1995 and was invited by University of Louisville,USA as South Asian scholar to participate in the program “Religion & Society: A Dialogue”, conducted in various
cities of US from 27th.October to 17th.November,2007. He has contributed to books & encyclopedias published by Harvard University Press, Continuum Publishers, U.K and Springer Verlag, among others.
He has visited Belgium, Canada, France, Indonesia, Jordan, Kuwait, Malaysia, Morocco, Nepal, Netherlands, Saudi Arabia, Singapore, Spain, Turkey, United Arab Emirates, United Kingdom and United
States of America.