Akhtar Raza (Urdu اختر رضا ; Devanagari: Hindi: अख़्तर रज़ा) is an Islamic jurist, . Akhtar Raza was born on 23 November 1943 (24 of Dhu al-Qi'dah 1362 Hijri), in the district of Saudagran in the city of Bareilly, India. The name given during his Aqeeqah was Muhammad. He was also given the name Muhammad Ismail Raza. However, the name by which he is currently known is Akhtar Raza.
He has been ranked 26th in the list of Most Influential Muslims of the World by Royal Islamic Society of Jordan. Known for his Scholarship and Taqwa he has been adjudged as Leader of Ahle Sunnat Wal Jama'at in India.
He belongs to the Hanafi Madhab of the Sunni denomination of Islam, which generally gives special respect to the Aulias (Muslim saints and holy men after Muhammad) and appreciates Sufism. The Barelwis are opposed to many elements of the Deobandi sub-sect. Since India is a secular state, the government does not appoint the Grand Mufti (called Mufti-e-Azam in Persian, or Mufti `am in Arabic), nor other religious office-bearers, so it is up to the Muslim community of India to appoint this post. He runs a website called http://www.taajushshariah.com, which also lists his Fatwas.

When Akhtar Raza reached the age of 4 years, 4 months, and 4 days, his father, Islamic scholar Maulana Ibrahim Raza Khan, arranged for his Bismillah Khwaani (commencement of Islamic studies) His maternal grandfather Mustafa Raza Khan, performed the ritual.
Akhtar Raza received his basic Islamic education at home and completed the basic recitation and the study of the Quran under the guidance of his mother. He then studied further under the guidance of his father. Having completed his basic studies at home, he was enrolled in the Darul Uloom Manzar-e-Islam in Bareilly. There, under the guidance of teachers and scholars, he studied many books, commencing with the basics such as Mizaan, Munshaib, Nahv Meer and proceeding to much more advanced books such as Hidaya Akhirain. On Friday, 15 January 1962, (24 of Dhu al-Qi'dah 1382 Hijri), Akhtar Raza reached the age of 20, and received Khilafah (ordination into spiritual succession) by Maulana Mustafa Raza Khan.
Akhtar Raza then studied tafsir and ahadith for three years from 1963-1966 at the Al Azhar University in Cairo, Egypt. He achieved the distinction of being one of the best foreign students to have studied at the Al-Azhar University, securing the first position during every examination. He was awarded the Jamia Azhar Award by Colonel Jamal Abdul Nasir upon graduating from the Al Azhar University, He was also presented with a Certificate of Merit in the field of Ahadith (plural of Hadith, the records of the sayings of Prophet Muhammad). When he went back many years later for a visit, he received the Fakhr e Azhar (Pride of Al Azhar) award.
Akhtar Raza returned to India at the age of 24, where a large crowd awaited him at the Bareilly railway station. An article describing his return to Bareilly Shareef was written by Umeed Razvi. It was printed in the December issue of the Monthly Ala Hadrat magazine under the title, Great Welcome. The article stated: A beautifully coloured and scented rose from the garden of Ala Hazrat, his Eminence, Maulana Akhtar Raza Khan Qaadiri Al Azhari, the son of Hazrat Mufassir-e-Azam Hind Maulana Ibrahim Raza Khan arrived in Bareilly Shareef after a lengthy stay at the Al Azhar University in Cairo. He was welcomed at the Bareilly Junction Railway Station by many well-wishers, friends, families, great Ulama and students of Madressa Manzar-e-Islam under the spiritual supervision of Huzoor Sarkaar Mufti-e-Azam-e-Hind Maulana Mustafa Raza Khan.

Akhtar Raza has received many Ijaazahs and Sanads from all over the world, including from from Mustafa Raza Khan in many Silsilas including the Qadri, Chishti and Naqshbandi.

Akhtar Raza has written many books on a vast range of topics covering cience, religion and philosophy. A collection of fatwas by the title of Azharul Fatawa is his magnum opus. He also did many translations.

Azharul Fatawa is a collection of English-language fatwa given by Akhtar Raza. The collection has been widely acclaimed and accepted by Sunni Muslims all over the world and specially by Sunni Muslim Communities living in the United States, Europe, South Africa and Western countries, as the rulings mainly refer to these countries. 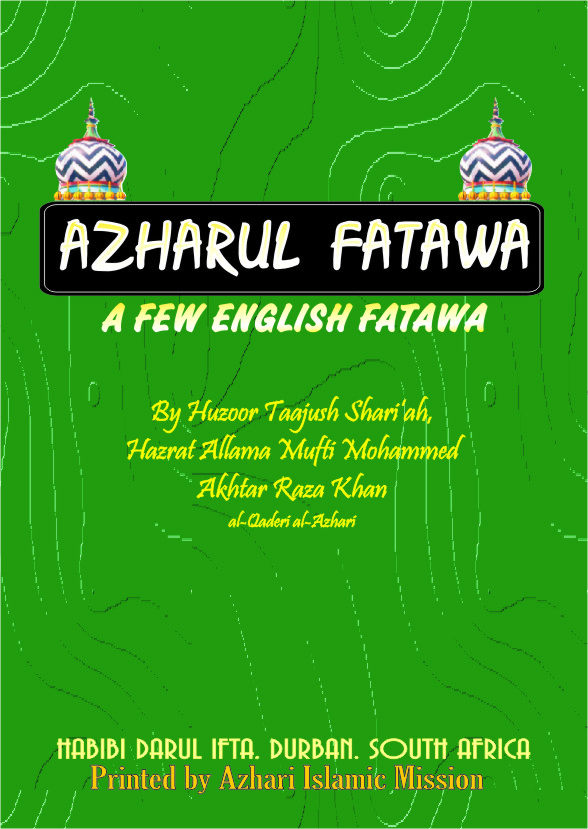 Akhtar Raza's Diwan (Collection of Naats) was published for the first time entitled Naghmat-e-Akhtar. Later, it was published entitled Safina-e-Bakhshish in 1986. It contains many Naats in the Arabic and Urdu language.

Akhtar Raza was declared the Qaazi-ul-Quzzaat or Qadi-ul-Qudat (Muslim Chief Justice) for the entire country of India, during the Urs e Razavi in October 2006 in the presence of many Ulama, prominent Islamic Scholars and thousands of people, including:
The title is only symbolic, because India is officially secular.

Centre of Islamic Studies Bareilly India
Akhtar Raza established the Islamic university Jamiatur Raza in May 2000, so that it could be conductive to profound learning and the thorough correct understanding of the Holy Qur'an and Sunnah, so that the hidden part of Islamic Ideology can be discovered in order to suit the present situations in the scientific and technological era.

There are many institutes working under the guidance of Akhtar Raza, including
He is the president of:

Mufti Muhammad Akhtar Raza Khan is the torch-bearer of the Razvi Silsila. He has many mureeds all over the world, including; Iraq, Pakistan, Madina, Makkah, India, UK, Holland, South Africa, America, Turkey and Malawi. Many of his mureeds (disciples) are great Ulema, poets, authors, doctors and research scholars.
Amongst his famous Khulafa (successors);
Amongst his famous students;

He has issued many fataawa (plural of fatwa, Islamic rulings) on many different Islamic matters.

"One cannot donate blood and organs because these are the Amanah (property) of Allah, therefore it is not permissible to donate any part of one's body or (donate) the blood."

"There is no legitimacy to lead Jummah prayer anywhere after you have performed it in one place. It is not allowed to perform Jummah prayer in the Jail at any cost. Prisoners (Muslim Prisoners) should recite Zuhr individually."

Birth of a girl

Akhtar Raza stated that it is un-Islamic to be dissatisfied at the birth of a girl, as all children are to be considered a blessing.

"It is required that a person dresses in a certain manner or has to wear a uniform to identify his profession. If these rules are not followed, then one is dismissed. Similarly, in Islam, different codes of dressing have been set aside for Muslims so that they can be recognized among the non-Muslims. If this dress code is not followed, then we deserve to be punished as well."
Akhtar Raza disallowed wearing of the Tie and said Muslims must strictly abstain from it. He has written a full book regarding this called Tie Ka Masa'la.
"He who shaves his beard or gets his beard less than fistful is declared sinful. To such a person who commits this sin is not able to lead the prayers. It is Makruh-e-Tahrimi (Strongly Disliked) to perform Salaah behind him."

Akhtar Raza stated that the qualities that one should look for in a marriage partner are piety and God-fearing. Neither the boy nor the girl should be forced into a marriage. The bride's mother's consent is just as important. Further he declared that the name of the bridegroom, his father's name and the amount of Mahr (dower money paid by groom to bride) be discussed and accepted by the bride. Further the man should be allowed to see the girl without her knowledge.

The Grand Mufti, and in general all Barelwis, oppose the Wahhabi movement of Islam, which is funded and encouraged by Saudi Arabia. Akhtar Raza has criticized the Wahhabis, and issued fatwas that permit Muslims making supplication, near the mausoleums of the Aulias (Muslim saints after Muhammad) and allowing intercession to be sought from them (i.e., praying to Allah though the medium of the Sufi saints). He says: In fact, Wahhabis have refused the commands of the Holy Quran and authentic Traditions of the Holy Messenger (Sallal-Laahu Ta'ala Alaihi Wasallam) and have adopted very irrespective manners towards the Saints and pious persons. They are misled and every baseless act of Wahhabis is against Islamic faith.
Further, he says, It is my advice to all Sunnis and especially to the Mureeds (disciples) of Silsila Razvia to keep away from all these wrong doings. Please also avoid sending your children to Wahhabi Madrassas and Darul Ulooms and bring them up in a Sunni environment and make them refrain from being Wahhabi.
The Deobandi school of Islam, which has stricter rules in regards to reverence of Sufi Saints, has been declared un-Islamic by Akhtar Raza: It is not permissible to read Namaaz behind a Deobandi Aalim (singular of Ulema) on any account. Namaaz performed behind a Deobandi Aalim, as well as behind unbelievers, is totally incorrect.

During Akhtar Raza's August 2008 trip to Syria, he was asked to pray for rain by the Damascus Ulema. He did so and caused rain at a time of year, when it had not rained in five years. During the same trip, Sheikh al-Sabah stated that he when he walked by the place where Akhtar Raza was staying, he saw Anwaar (plural of nur, lit., light) emanating from within.
Other attributed karamat include several cases of Indian Hindus accepting Islam after seeing Akhtar Raza in dreams.

Many Scholars have paid tributes to the contributions of Akhtar Raza, which include;

As for the claim that the Shaykh makes takfir of everyone other than himself and those affiliated with him is another exaggeration, rather, a lie that stems from animosity. The Shaykh has replied to this accusation in Arabic in his “Mira’at al-Najdiyyah” published by the name “Haqiqat al-Barelwiyyah”, which is the reply to Qadhi Atiyyah’s endorsement to Ihasan Ali Zahir’s “al-Barelwiyyah” (Published in Egypt by Dar al-Muqattam, 2009) asking him to produce a single nas of our ulama in which they have made takfir of Ibn Taymiyya, Ibn Abdul Wahhab and their followers. Rather, it is these people who make takfir and tadlil of the entire ummah. This accusation is the popular one found in “Nuzhat al-Khawatir” and “al-Barelwiyyah” about Barelwis and is false.