Gulam Mohammed Mahmood Banathwala (15 August 1933 – 25 June 2008) was the spokesman and the voice of Indian Muslims in Indian Parliament. 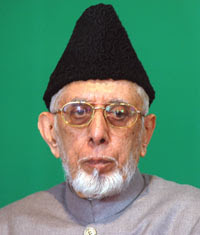 His family, the Memon Family, was emigrated from Kutch of Gujrat to Mumbai of Maharastra. He was born on August 15, 1933. His wife was Ayesha, who died in 1998. They had no children.

He was a College Lecturer early in his life. Then he gave up his profession and came to politics and became a great active politician. He was elected to Lok Sabha seven times from the Ponnani constituency of Kerala. He made the record of more time elected Member of Parliament, from Kerala same as Mr. Ibrahim Sulaiman Sait. He entered politics with his great speech both in Urdu and English. He was known as an Educationist. In 1960, he became the General Secretary of Muslim League of Mumbai. In 1962, he was a candidate to the Legislative Assembly from the Umarkhadi Constituency of Maharastra, but he was defeated just for 400 votes. But in 1967, he won from the same constituency and became the first member of Muslim League in the Maharastra Assembly. In 1972, he repeated his victory to the Legislative Assembly. In the same period, he was a corporation Councillor in Mumbai Corporation. In 1977, 1980, 1984, 1989, 1996, 1998 and 1999 he was elected from the Ponnani Constituency of Kerala. In 1986, he brought a private bill and which made an Act of the Muslim Women Protection of Rights on Divorce Act, by the Rajiv Gandhi Government. Later, he became the State President of Muslim League of Maharastra. The Muslim League led by G M Banatwala (centre ) MP stage a 'dharna' for peace at the traffic island at the Mandvi post office in Bombay on December 16, 1990