Padanatha Mohammed Sayeed (May 10, 1941 - December 10, 2005) was a leader of the Indian National Congress party. He was a member of Lok Sabha for eight terms, representing Lakshadweep.

Children    One son and seven daughters

1971-74 Member, Joint Committee on Salaries and
Allowances of Members of Parliament

1973 Member, Joint Committee on Constitution
(Thirty-Second Amendment) Bill, 1973 on Amendment
in Ninth Schedule of the Constitution

1992-94 Member, Joint Parliamentary Committee to Enquire
into Irregularities in Securities and Banking Transactions

1996-97 Member, Committee on Transport and Tourism

Chairman, Committee on Provision of Computers to Members
of Parliament

Member, Committee on Transport and Tourism* P.M. Sayeed was born in Andrott Island, Lakshadweep. He studied at Government Arts College, Mangalore and at Sidhartha College of Law, Mumbai . 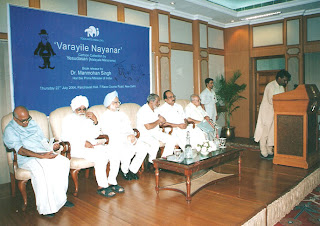 His son Muhammed Hamdulla Sayeed, 26, a Law graduate from Indian Society College in Pune, was elected May 16, 2009 to the Lok Sabha. He defeated Dr P Pookunhikoya of NCP by 2198 votes to become the youngest member of the 15th Lok Sabha. Social Work, labour welfare, upliftment of the poor, the downtrodden and
the people belonging to minorities