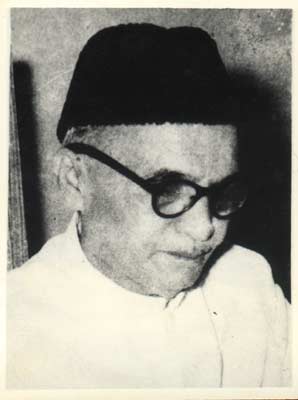 
K. M. Seethi Sahib (1898 - Monday April 17, 1961) was a Speaker of the Kerala Legislative Assembly and a social reform leader of the Mappilas of Kerala, India. His role in the upliftment of the Mappila community in post-Independent India was so significant that he's sometimes referred to as the "Chief Architect of the Mappila revival" in Kerala. He was also sometimes referred to as "Seethi Sahib Bahadur", the suffix being an honorary title conferred upon by the British in pre-Independent India


K.M Seethi was born in 1899 as the son of Haji Seethi Mohammed and A.K. Fatima Beevi in an affluent family in Kodungaloor . He did his schooling at Kodungaloor High school and completed the Inter Mediate Course from Ernakulam Maharajas College in 1917, topping his batch. He pursued his further education to attain the B.A. and B.L. degrees. After graduating in law, he enrolled as an Advocate in Madras High Court in 1927. He went on to become a successful lawyer, practicing at Ernakulam and Tellicherry.
He joined politics as a student, taking part in the Non-Cooperation Movement in 1921. His mentor was Vakkom Moulavi, a pioneering social worker and freedom activist from Travancore. Maulavi's thoughts and writings in his periodical Muslim played an important role in defining his religious beliefs and ideology.
In 1928, Seethi was elected to the Cochin Legislative Assembly and attended the historic 1930 Lahore Congress session representing the people of Kerala. A year later, he was re-elected to the Cochin Legislative Assembly again. But conflicting communal perceptions within the Congress led to his departure from the organization in 1933. By 1934, he had become active in the Muslim League In 1946, he was elected to the Madras Legislative Assembly from the Malappuram Constituency , a victory he repeated in 1952.

After the State of Kerala was formed, he won the 1960 elections to represent the Kuttippuram Constituency. He was elected as the Speaker of the Kerala Legislative Assembly on February 22, 1960 in the Pattom Thanupillai ministry. Two years later, on April the 17th, 1961 while in office as the Speaker, he breathed his last..

Seethi Sahib was an eminent lawyer, statesman, writer and a gifted orator. He was a founder member of the Chandrika newspaper in 1934 and influenced a wide range of other individuals who struggled for the Mappila community revival. They included figures such as KK Muhammad Shafi, the first editor of the newspaper Chandrika, C.P. Mammu Keyi, its first managing director and B. Poker Sahib (1890-1965) etc. He was a founding member of the Farook College at Calicut, a landmark institution in the renaissance of Muslims in the Malabar.

The Seethi Sahib Memorial Polytechnic College is named after him. In August 1992, the Department of Cultural Publications, Government of Kerala published his biography titiled "Seethi Sahib", authored by T. M. Savankutty