First tutor in Neurology at Kerala

P. K. Abdul Gafoor was the founding President of Muslim Educational Society (MES) in Kerala and one of the pioneers of education amongst the Mappila community in Kerala. He was a medical doctor by profession and served as a Professor of Medicine at Calicut Medical College. In 1964, Abdul Gafoor and a group of young educated Muslims established MES at Calicut, with the objective of cultural, educational and economic upliftment of Muslims. By 1984, it had grown the become the largest distributor of scholarship in India

After completing his Graduation in 1951 from Alighar Muslim University he took the MBBS degree from Kerala University in 1957 (first batch of university). In 1958 he joined as the first tutor in Neurology at Kerala Govt. Medical College - Trivandrum. He took DTM &H from Edinburgh and worked as member staff of Edinburgh University under Prof.Norman Dutt and Prof.Simpson. He also obtained MRCP with specialisation in Neurology, and was promoted as Assistant Prof. Of medicine in Calicut Medical College. In 1971 he was promoted as Associate Professor at Calicut Medical College and he was awarded the FRCP in 1979. 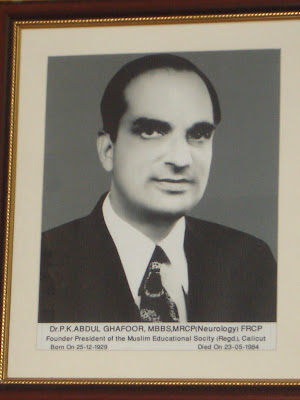 An athlete champ, A Writer, An orator, A Co-ordinatorHe was the Aligarh and Kerala University athletic champion .A powerful orator and writer who has authored the book "Rogangalum Rogikalum". In 1964 Dr. Abdul Gafoor materialized the idea of Muslim Educational Society and became the founder President of MES. After setting up MES, he went to every nook and corner and established schools, colleges, hostels, orphanages, ITCs etc. He was instrumental in organizing the All India MES and he organized educational conferences in Bombay, Delhi Patna, Hyderabad etc.. in which eminent national leaders like Indira Gandhi, Rajiv Gandhi, Gyani Zail Singh, Zakir Hussain and Fakrudheen Ali Ahamed participated. These conferences gave a fillip to Muslim educational movements all over India. Dr Gafoor was a member of many international bodies like RABITHA and was able to draw their attention to the problems of Indian Muslims.

After having lead the Muslim educational movement for two decades with his magnetic charisma that attracted a generation, Dr. Abdul Gafoor passed away on 23rd May 1984 at the age of 54. But still the name itself is an inspiration and beacon not only for MES but for the Indian Muslims at large!. 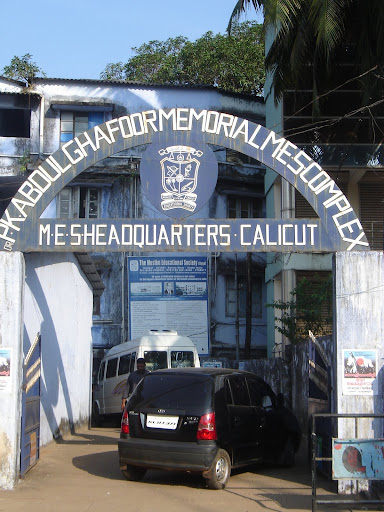