B. S. Abdur Rahman, (Tamil: அப்துர் ரஹ்மான்) also known as Sena Aana, is the Vice-Chairman of Dubai-based ETA Star Group, one of the most powerful players in the UAE's real estate and trading sectors. He is also the Chancellor of B. S. Abdur Rahman University (formerly B. S. Abdur Rahman Crescent Engineering College), Vandalur, Chennai. B. S. Abdur Rahman is one among the prominent Tami Muslims and a leading businessman in Tamil Nadu. His family is better known as the Buhari Group. His networth was estimated at $1 billion in 2005.
He is a philanthropist and associated with many educational and social service organisation in India and abroad. In recognition of his services in the field of education, business, health care, social service and communal harmony, the Sathyabama University has conferred an Honorary Doctorate on him in 2005 at Chennai.
His company built several landmarks, businesses and institutions in Chennai viz. Chennai Citi Centre, Chepauk Stadium, Anna Nagar Tower, Marina Lighthouse, Valluvar Kottam, Government General Hospital, Gemini Flyover, Raheja Towers, Star Health and Allied Insurance, Crescent Engineering College, etc.. 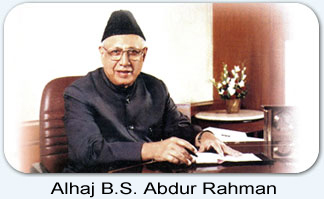 Alhaj Dr. B.S.Abdur Rahman, lovingly called 'Sena Aana' by people of Kilakarai. A well known personality in the field of Education, Economy and Industry and a Philanthropist of par excellence, hails from Kilakarai, Ramanathapuram District, Tamil Nadu, Besides his business activities he concentrates on the upliftment of the economically weaker sections and minorities through education, employment, health facilities and rural development. At present he pays more attention on "Women Education". His large heartedness and far sightedness have produced many a institutions of excellence, through which his services continue to benefit the poor, downtrodden and the under privileged sections of the society. He traces his lineage to first Caliph of Islam, Hazrat Abubakr Siddiq (RA)


CONTRIBUTION IN THE FIELD OF EDUCATION


He feels that education is the key that opens the solutions to the socio economic problems of the society. Hence he founded the following Institutions through whcih all his Educational & Literacy activities are carried out.

I. SCHOOLS 1. Crescent Residential Matricualtion Higher Secondary School, Vandalur, Chennai - 600 048.
A fully residential school that caters to the needs of children from India & abroad. The first educational Institution started by him.


2. Thassim Beevi Abdul Kader College for Women, Kilakarai
This college for Women is situated at Kilakarai, Ramanathapuram District. The long felt need of the pople in this remote rural area is fullfilled by the establishment of this college. This college offers Under-graduate & Post-graduate courses.


To provide better medical facilities to the rural masses at their door step, he started a well equipped hospital at Kilakarai, which was inaugurated by Mr. R. Venkataraman the then President of India. besies he has assisted many such hospitals in various other villages.


Yousuf Zulaikha Medical Centre, Kilakarai, Ramanathapuram District
This hospital has out-patient and inpatient facilities, clinical lab with all diagnostic equipments. The hospital is conducting regular medical camps in rural and remote villages to provide easy accessibility to the medical facilities available in towns and cities.
B) Assisted with Funds


He feels that a sound mind in a sound body is a healthy trend of development of the youth in this country. Hence much importance is being given to NSS, NCC, Scouts and other youth activities in all his institutions. Hence to promote sports activities and to imbibe sports culture in the minds of yougsters, he constructed and donated a stadium with all facilities for indoor games, gymnasium and a gallery to Tamil Nadu Government. Under the purview of Sports Authority of Tamil Nadu during 1997. The stadium was inaugurated by prof. K.Anbazhagan, Hon'ble Minister of Education Govt. of Tamil Nadu in the presence of Shri. R.Dhanushkodi Athithan, Minister of State, (Department of Youth Affairs & Sports), Government of India, The stadium was named as Seethakathi Sethupathi Stadium, which depicted a touch of communal harmony in the minds of the people.
SOCIAL WORK


He is the founder of UNITED ECONOMIC FORUM through which he has organised number of economic development activities and encouraged social work.

He has founded and financially aided the following Orphanages.

A. FIFTH INTERNATIONAL ISLAMIC TAMIL LITERARY CONFERENCE Sponsored by the Seethakathi Trust founded by him. This conference was held at Kilakarai from 30th December 1990 to 1st January 1991.
The conference Inaugurated by Dato Samivelu, Minister of Malaysia was well attended by Tamil Scholars from different parts of the world, namely Srilanka, Singapore, Malaysia, Hongkong and UAE. The three day conference had different sessions on various aspects of Tamil Literature and nearly 24 books were released. The valedictory function was presided over by Dr. Kalaingnar M.Karunanidhi, the then Cheif Minister of Tamil Nadu.


B. ALL INDIA MUSLIM WOMEN'S EDUCATION CONFERENCE
Sponsored by the Seethakathi Trust and All India Islamic Foundation founded by him. This conference was conducted at Crescent School Campus, Vandalur, Chennai - 48, from 21 to 23 December 1996. It was inaugurated by prof. K. Anbazhagan under the Presidentship of Justice Fathima Beevi, the present Governor of Tamil Nadu.
This conference concentrated on the topic namely "Education, Employment and Enterpreneurship of Muslim Women". This conference was well attended by Muslim Women from India and abroad. The Valedictory session was presided over by Thiru G.K.Moopanar, M.P., Dr. Thahir Mahmood, Chairman, National Minorities Commission gave the valedictory address.


A Biomonthly magazine in English, published from New Delhi being promoted by Mr. B.S. Abdur Rahman Serving the cause of our nation in general and weaker sections in particular.
AWARDS
In recognition of his services in the field of education, the Aligarh Muslim University students union conferred in the Honorary Life Membership in the presence of Prof. Faruqui, Vice Chancellor and Prof. Abdul Hassan Siddique, the pro. vice Chancellor of the University. 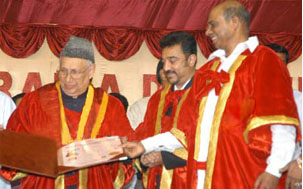 In recognition of his services in the field of business, social service and education, the Sathyabama Institute of Science and Technology - Deemed University is conferred an Honorary Doctorate on 17th Jan 2005.