Here is a brief profile of the Bangalore-North Constituency candidate, which will be a ready reference for your publication at anytime. The profile provides insight into his vast tenure in Indian politics.


Shri C. K. Jaffer Sharief has been instrumental in the modernization of the Indian Railways during his tenure as Minister for Railways. He is a relentless congress worker for decades who has strengthened the party at all levels irrespective of the position he held. His work particularly in the upliftment of the downtrodden is immense. His mass base speaks of his ability to deliver what he promises.

• Challakere Kareem Jaffer Sharief, son of Late Janab C.Abdul Kareem, was born in an agricultural family in the town Challakere in Chitradurga District of Karnataka. • He was drawn to freedom struggle in forties while still a student and took active part in it, giving up his studies at the prime of his youth. Since then wedded to the ideologies of the Congress, he has stood steadfast by the Congress Party throughout its historical struggle for freedom of the country as well as for making free India a strong and self-reliant nation. 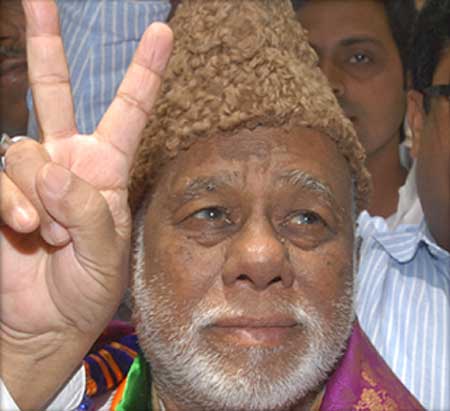 • He has held various positions in the Indian National Congress party over a long span of his political career. Beginning his political career as a Seva Dal Volunteer in forties he has risen to the positions of prominence both in the Party and the Government by sheer dent of his hard work, devotion to the cause of upliftment of poor and downtrodden and deep commitment towards the principles and policies for which the Congress stands. He served and strengthened the party as General Secretary, All India Congress Committee and also as Chairman, Minority Department of All India Congress Committee. He served the Government of India as Minister of State, Minister of State with Independent Charge & Cabinet Minister in Union Council of Ministers. Presently he is a permanent Invitee of Congress working committee, the highest policy making body of Indian National Congress Party.

• He is a leader with mass appeal. The people of Karnataka have bestowed their deep love and affection on him, which is reflected by his long tenure in Lok Sabha since 1971. After about two decades of service to the Party at District, State and National Levels he was first elected to the Fifth Lock Sabha in 1971 from Kanakapura Constituency in Karnataka. Thereafter he was returned to the Parliament by the people of Bangalore (North) Parliamentary Constituency for a record 7 times. His serving in parliament (Lok Sabha) for a total of 8 terms is a record in itself which only a few can match in the Indian politics.

• During his long tenure in parliament, he has been associated with various Standing Committees of Parliament and Consultative Committees of various Ministers. He has a very rich experience of the working of various Ministries. He was a Minister of State for Railways in 1980 when Smt. Indira Gandhi returned to power as Prime Minister. His four year stint in Ministry of Railways was followed by Independent charge of Ministry of irrigation till the next General Elections. He also served the country as a Minister of State for Coal from February 1988 to November 1989.

• With the return of Congress Party to power in June 1991, he was assigned the responsibility of heading the important infrastructure Ministry of Railways as a Cabinet Minister. His dynamic leadership and vast administrative experience has not only helped this largest service organization to come out of flat but also provided new momentum to its growth. His ambitious Uni-gauge project aimed at elimination of multi-gauge bottleneck of railway system and enhancement of faster/higher carrying capacity has immensely contributed for Indian Railway’s turn-around magic. His visionary leadership has helped backward regions of the country to come into national main stream and made the vast Railway net work a profitable venture. He served as Union Minister of Railways from June 1991 to Oct 1995. • During his stint as Railway Minister, Karnataka State emerged as a major beneficiary with 1000 kms of Gauge Conversion works out of 6000 kms sanctioned for entire country. He was instrumental for the establishment of NEW RAILWAY ZONE IN KARNATAKA [SOUTH WESTERN RAILWAY], RAIL WHEEL FACTORY (Formerly WHEEL AND AXLE PLANT], INLAND CONTAINER DEPOT/WHITE FIELD, RAILWAY TERMINAL BOARD, YASHWANTHPUR RAILWAY STATION AS 3rd RAILWAY TERMINAL FOR BANGALORE.

• A study conducted by Ministry of Statistics in 2004 accredited him amongst the few dynamic members of Parliaments who had spent 100% MPLAD Funds during 13th Lok Sabha for developmental works in their Parliamentary Constituencies. • Despite his heavy responsibilities and busy schedules he still finds time for over seeing the activities and guiding prominent educational institutions rendering yeoman service to backward and minority communities in the country. He is the Chairman of the Governing Council of the K.N.S.Memorial Charitable Trust, Bangalore which is running an Engineering College in the name of K.N.S.Institute of Technology, Bangalore. He is also a life member of the Society for Communal Harmony in India and presently Vice President of the Society. • Married to Smt. Amiena Bie, a pious and generous lady all along her life. They had two sons and two daughters from their wedlock. He lost his youngest son Khader Nawaz Sharief on January 29, 1999. He lost his wife recently on Dec 10, 2008. He is a loving father and spends his free time with his family and particularly loves to be in the company of his grand children. His favorite pastimes are interacting with people from different walks of life, reading and traveling. He has traveled extensively throughout India and abroad including as head of Ministerial delegations. He had been to USA, USSR, UK, UAE, CANADA, FRANCE, GERMANY, HOLAND, INDONESIA, MALAYSIA, HONG KONG, THAILAND, SINGAPORE, JAPAN, KUWAIT, SAUDI ARABIA, SYRIA, LEBANON, IRAQ, SRILANKA, LIBYA AND BRAZIL.