She is the Mother Teresa of Kerala. Had she been born into Christianity, she would have been beatified by now. These were the remarks of cultural leaders of Kerala to extol K.V. Rabia, the village woman from Malappuram who rose to global fame by kindling the light of knowledge to hundreds of illiterates, despite being confined to a wheelchair.

The country celebrated Rabia in the last two decades by bestowing many an honour on her, including the National Youth Award of 1993, the maiden Kannagi Sthree Shakti Award of 1999, the United Nations Development Programme Award of 2000, and the Joseph Mundassery Award of 2010.
Recognition took Rabia to pinnacles of fame. Books were written about her, and documentaries made her famous. Struck by polio, she has not walked since she was 14.
Having survived a cancer attack at age 32, Rabia broke her backbone in a miserable fall in the bathroom five years later. “It was that fall which cost me so dearly that I continue to suffer its after-effects,” says Rabia. Once described by her teachers as a “tape recorder” for her excellent memory, she has been suffering memory loss after the fall. The incident paralysed her below the neck, totally incapacitating her for several years. For six months, she was confined to a waterbed. Diabetes, blood pressure and cholesterol followed thereafter. A drastic change in food intake led to peptic ulcer, which currently annoys her more than anything else.
Today, Rabia cannot hold a telephone receiver for five minutes. “My hands are so weak I cannot even hold a book properly for a few minutes,” she says. She has been advised against using cell phone because of her cancer history. She keeps herself away from computers too for health reasons. Yet her inner spirit burns bright and indomitable. “I don't give too much importance to this temporal life. I will continue to serve society the best way I can… and what matters more is the life after,” Rabia says, reposing an unflinching faith in God. 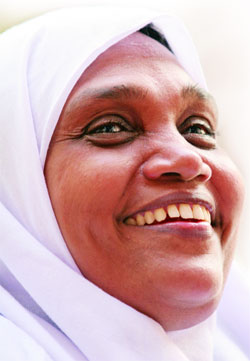 She says the fall she suffered seven years ago was a blessing in disguise. Incapacitation and immobility brought her much-needed peace and quietude, and she eventually became spiritual. She no longer attends any functions. The number of people visiting her at Vellilakkad near Tirurangadi has come down. But her heroic fight against odds has found its way to the textbooks of Stds. IV and V.
Students and teachers who visit her after reading her story in the textbooks are in awe as Rabia tells them the importance of acquiring knowledge both temporal and spiritual. “Never be proud and arrogant when God showers you with blessings; and never whine when God tests you with troubles and crises,” she tells her visitors.
The knowledge-imparting movement she began several years ago pulls on today, though not with the same verve and vigour. The organisation called Chalanam (meaning “movement” in Malayalam) she gave shape to made a lasting impact in the region. Under her patronage, as many as 200 volunteers joined Chalanam, and this organisation runs six schools for the physically challenged.
Rabia could mobilise 60 neighbourhoods as part of a programme she initiated for women's empowerment even before the popular Kudumbasree movement came into existence. They experimented in many things, including paper works, envelopes, pickle, and handicrafts. Currently Rabia manages a Jan Sikshan Sansthan (JSS) unit, offering several job-oriented courses to women, including saree designing and electronic repair works.
Apart from coordinating several village industries for women, she manages a women's library as well. The village of Vellilakkad owes much to Rabia for facilities like road, power and water supply it got some years ago. The State Government has made her a promise — that it will do something to prevent soil erosion taking place behind her house.