Ustad Wahid Khan was born in Etawah, Uttar Pradesh to the sitar maestro Ustad Imdad Khan . He was still quite young when Imdad Khan moved to Kolkata from Etawah with his family. In kolkata the family lived in the house of the noted connoisseur Taraprasad Ghosh, where Ustad Imdad Khan rigorously trained his two talented sons Enayat Khan and Wahid Khan.
Wahid Khan, at a very young age, was first initiated into Dhrupad, Khayal and Thumri and then in trained extensively on the Sitar and Surbahar by his father Imdad Khan for many years. Under the guidance and supervision of his father, Wahid Khan put in many years of very rigorous riyaz and mastered both the Sitar and Surbahar. 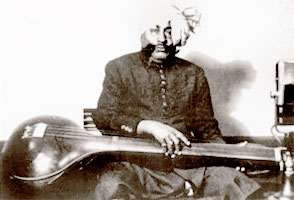 The later generations regard him as the greatest Surbahar-player of his generation, however he was also one of the greatest sitar-players of his generation. His available disc recordings of Khamaj (Vilambit Gat-Toda) and Piloo (Drut) both on the Sitar offer a glimpse of his virtuosity on the instrument. In Kolkata, Wahid Khan used to accompany his father in many of the latter's concerts on the Sitar and the Surbahar and received huge appreciation and critical acclaim everywhere.
Imdad Khan, later, moved out of Kolkata to settle in Indore as the Court-musician of the Maharaja Holkar of Indore. His sons Enayat Khan and Wahid Khan accompanied him to Indore. There Imdad Khan breathed his last. Following which Enayat Khan left Indore and went back to Kolkata, while Wahid Khan was appointed the Court-musician of the Indore Darbar, where he lived for 18 years on a very high salary. Wahid Khan also served the Patiala Darbar for 3 years as its Court-musician. He was also the Court-musician of the Nizam of Hyderabad.
Wahid Khan was a regular performer at the All India Radio. He also performed all over India and received numerous awards and medals from the famous institutions of Tikamgarh, Rewa, Baroda, Mysore, Dhaulpur, etc.
One of the greatest musicians in Indian Classical Music, Ustad Wahid Khan is a very important figure in the history of Etawah Gharana. An acclaimed musician on both the sitar and surbahar, Ustad Wahid Khan’s life’s purpose was to be a herald for Indian Classical Music; he devoted his life to spreading his music everywhere.
Ustad Wahid Khan also appeared in legendary filmmaker Satyajit Ray’s international award winning film Jalsaghar (The Music Room, 1958) where he performs on the surbahar in one of the scenes.