Sayyid Abdul Rahman Bafaqi Thangal, who played a major role in religio- political life Malabar Muslim community, was born as the son of Abdul Qadir Bafaqi and  Fathima Mulla Beevi on 19th February 1906 at Koyilandy Pudiya Maliyakkal house. Sayyid Abdul Qadir had six sons and three daughters  including  Sayyid Abdu Rahman. They are: Abdullah, Hshim, Ahmad, Muhammad, Abdu Rahman, Shareefa Rouza Muthu Beevi, Shareefa Mulla Beevi and Shareefa Maryam Beevi. Abdul Qadir Bafaqi was a prolific trader that he exchanged goods between different countries. He also established trade relations with Mali, Burma and other places.
Bafaqi Tangal had his education in the house of  Thattangara Kuttyammu Musliyar at Veliyancode near Ponnani. After  the death of the Musliyar in 1923 the thangal continued his studies under his son Muhammad Musliyar. After the  studies following the footsteps of his father, he turned to business making Calicut as the  centre.  In 1924 he started copra(dried coconut) business at Calicut copra bazaar. This was followed business in rice and started a branch  at Vadagara  forty Kilometres north of Calicut. In 1949 he started the Bafaqi and Company at Mughul street  in Rangoon,  Burma. The company rose into eminence that it became a major exporting Company in South Asia.

Bafaqi Thangal entered politics in 1936 to campaign for his relative Khan Bahadur Attakkoya Thangal in the election at Kurumbranad Muslim constituency. Attakkoya  was an independent candidate while his opponent was the Muslim League leader B. Pocker Sahib. In the election Attakkoya was victorious and his victory was chiefly due to the influence of Bafaqi Thangal. He later realized that Muslims should have a common platform and this led him to join Muslim League politics in 1938. In 1943 he became the President of the Town Muslim League and  in 1947 when Malabar Muslim League President Abdul Sathar Sait left for Pakistan Bafaqi Tangal became the President of Malabar district Muslim League. When Kerala State was formed Tangal became the President of the State Muslim League. He came to be known as  Qaid al Qawm (The leader of the Muslim Nation). In 1942 he was elected as the president of Malabar Produce Merchants Association. . In 1942 he was nominated as the member of Kozhikode Municipal Council.
Tangal became the king maker of Kerala politics. He was there in the liberation struggle against the EMS ministry of Kerala in 1957. Following the dismissal of EMS ministry the Congress formed a new ministry in which Muslim League  became  the speaker of the Legislative Assembly  but due to differences with Congress the League left the ministry and  joined with EMS Nambudirippad and in the newly formed cabinet by EMS in 1967 Muslim Leageue leaders Mr. Muhammad Koya and Ahamad Kurikkal became the ministers for education and Local self government respectively. Later Tangal came out of CPM led coalition and joined hands with Sri C.Achuta Menon of right wing CPM. Thus league continuously enjoyed the rule and Tangal created  a situation that no party can rule the state without Muslim League. Tangal’s presence was crucial in the formation of all these ministries. As the leader of Muslim League and of the Muslim community he spent his whole time for strengthening the community in religious and political fields.  He was there to revive the traditional Islam by assisting the creation of Samastha Kerala Jamiyyat al Ulama the body of  traditionalist ulama and servings its President ship. He chaired the Samasthe mushavara (executive)  held at the Mudakkara mosque at Calicut in 1949 and it was in this meeting the  body decided to start elementary Islamic madrasas at different parts of Malabar. He presided over the other mushavara meetings also. Sometimes the meetings of both the samastha and Muslim League were convened in the warehouse (pandikasala) of Bafaqi Tangal. It was due to the pressure from thesamastha, thangal decided to keep away from the Muslim Educational Society for their “anti Islamic article” describing Prophet Muhammad as the founder of Islam instead  of being  the messenger. Muslim League also followed the way and all the League leaders resigned from the  society.  He actively participated in the formation of Islam Mata Vidyabyasa Board and till his death he continued as the treasurer of the organization.
Bafaqi Thangal believed that Muslim revivalism can be achieved only through upholding the traditional beliefs propounded by the ulama and to keep the identity of the community, the Kerala Muslim cultural stream developed by the sufis and ulama should be continued. At the same time he insisted that freedom of may be given to all the sects and groups within the community. He utilized the service of the modern educated class to spread the Muslim League movement to far and wide and  Chandrika daily became the mouth piece, not only of Muslim League, but also of the whole community. Whenever there occurred any issues between the dissident Muslim groups, Thangal interfered and the issue was settled. His words were accepted by all sections without faltering. 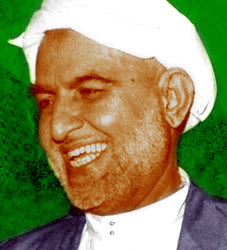 When northern Kerala was inclined to communal riots between Hindus and Muslims Thangal reached the place to make the situation normal. During the Talassery riots of 1960s Thangal lead peace marches and the leaders of both the  communities  accepted his words. His leader ship heightened the prestige and morale of the community.
Thangal was there in the establishment of the different educational centres in various parts of Kerala.  Farook College, Tirur Polytechnic College, P.S.M.O College, Sir Sayyid College and Jamia Nooriya Arabic college are the monuments of his educational accomplishments.  He was the working force behind the Maunat al Islam Sabha of Ponnani, Tarbiyyat al Islam Sabha of Calicut, Talassery Darussalam Yatheem Khana etc. He renovated the Puzhvakkath Palli of Calicut and that of Elathur Valiya Masjid at his own expenses.
Thangal visited Malysia, Singapur, Baghdad, Jerusalem, Egypt, Sri Lanka, Myanmar, Indonesia and Arabia. He also established connections with the  the Bafaqi families in various parts of the world.
Bafaqi Tangal performed Hajj for thirty three times. There in Makka he arranged permanent facilities to the Kerals pilgrims and also tried to regain the Keyi Rubat, the  resting place of Malayali Hajis from the Saudi government. He personally presented the case before His Higness Faizal, whow was the ruler of Saudi Arabia. His popularity in Makka and Madina was so great that the king himself used to invite him to the gatherings in the palace. 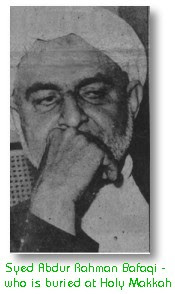 Bafaqi Tangal left the world on Friday  19th January 1973 after performing the Hajj and he was laid to rest  at Jannat al Mahalla in Makkah. A large gatherings assembled in the harem shareef of Makkah to mourn his demise. People from various sections and political parties lamented over  the death of the great leader. Muslim community of Kerala lost a shepherd in their political and religious life.
Bafaqi Thangal  had married five times. The first wife  was Puthan Veetil Khadeeja Beevi of Tanur, (daughter of Ponnani Jarathingal Cheriya Koya Thangal), in which there were five sons and two daughters. His second wife was Shareefa Amina Beevi of Koilandy and third  Muthu Beevi of Koilandy Pudiya Maliykkal both of whom bore  no children. The fourth wife Shareefa Khadeeja Beevi of Chaliyam gave birth to six sons and four daughters.  After the death of his former wives he married a fifth wife in which three sons and one daughter were born. Totally there were fourteen sons and seven daughters to him. His children are Hamid, Abdul Qadir, Muhammad, Husyn, Zainul Abideen, Abdullah, Hamza, Abubakkar, Umar, Ibrahim, Ali,  Hasan, Usman, Ahmad,  Mullabeevi, Ummu Kulsu, Rukiyya, Fathima, Maryam, Khadeeja and Nafeesa.