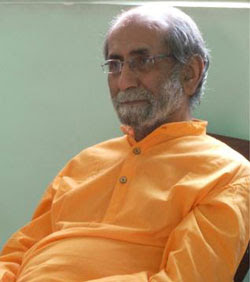 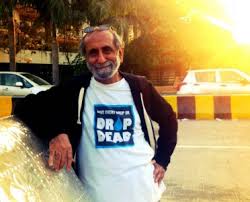 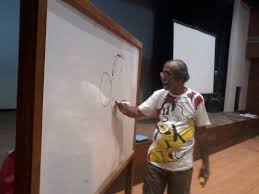 His NGO is aptly named "Drop Dead." He used his experience as a celebrated painter to design posters and pamphlets with the tagline: "Save every drop… or drop dead." Every Sunday, the Drop Dead team (Aabid, Riyaaz (a plumber) and a female volunteer Tejal) would pick a building, get permission from the housing society, and get to work. A day before, Tejal would hand out pamphlets explaining their mission and paste posters in elevators and apartment lobbies spreading awareness on the looming water crisis. And finally, they would ensure the building was drip-dry.
By the end of the first year, he had visited 1,533 homes in Mira Road, fixed around 400 taps, and saved around 3.84 lakh (0.3m) litres of water.
With dwindling funds, Surti approached the local Mira-Bhayander Municipal Corporation asking them to set up a full-time office with a phone, a plumber and a bicycle so that if leakage starts somewhere, like fire brigade, a plumber would be available, but his request was turned down as was his request for funds. An award for life time achievement in Hindi literature from the State government and a cash prize of Rs. 50,000 helped him revive his work.
With Maharashtra expecting its worst drought in 40 years in the summer of 2013, Chief Minister Prithviraj Chauhan has warned citizens to begin conserving water. Surti simple yet effective approach if adopted by every citizen could help save water - the elixir of life.
Source : sparrowawards.natureforever.org
No comments:

Born on 29th May 1948 in a small hamlet, Kurunchalian Villai, in Kanyakumari District of Tamil Nadu, as the 3rd of the 5 sons of a lower middle class couple Pathummal -Mohammad Abdulkader, Akbarsha had school education at Govt LPS, Pottalkulam; St. Antony’s High School, Alagappapuram (during this period, the family lived at Punnarkulam); and Govt High School, Manikettipottal. He was qualified for PUC and B.Sc. from Scott Christian College, Nagercoil (1964-68), M.Sc. from Govt. Arts College, Coimbatore (1968-70) and Ph.D. in Zoology, on part-time basis, from Jamal Mohamed College, Tiruchirappalli (University of Madras, Chennai) in 1980.

Prof. M.A. Akbarsha is currently Director and Chair of Mahatma Gandhi-Doerenkamp Center (MGDC) for Alternatives to Use of Animals in Life Science Education, and Gandhi-Gruber-Doerenkamp Chair for Alternatives in Education and In Vitro Toxicology, Bharathidasan University, Tiruchirappalli. The Center is fully supported by a grant from Doerenkamp-Zbinden Foundation, Switzerland.

Carrying out research in Endocrinology, Reproductive Biology, Cancer Biology and Obesity; and made quite a few outstanding discoveries. To-date published more than 150 articles in national and international Journals (of which 74 are listed in PubMed http://www.ncbi.nlm.nih.gov/pubmed/) and made more than 150 conference presentations; Most research concern Reproductive Biology, and Drug Discovery for cancer and obesity.

Operated about a dozen research projects sponsored by Agencies in India (UGC, DST, ICMR, CSIR) and was a co-investigator in 2 grants from USA (NIH and Komen Breast Foundation).

Guided 24 students for award of Ph.D.

Formally retired from service in 2008, he established the MGDC, on invitation, and is the Director & Chair of this Center. Among the several recognitions here, he is member of the Expert Committee to review the use of animals in Zoology/Life Science education, constituted by UGC.