Mohammad Hamid Ansari (Telugu: ముహమ్మద్ హమీద్ అన్సారి,Hindi: मोहम्मद हामिद अंसारी, Urdu: محمد حامد انصاری ) (born April 1, 1937) is the 12th and current Vice President of India. He is a former chairman of the National Commission for Minorities (NCM). He is also an academician, a career diplomat, and a former Vice-Chancellor of the Aligarh Muslim University.
He was elected the 12th Vice President of India on 10 August 2007 and took office on 11 August 2007. 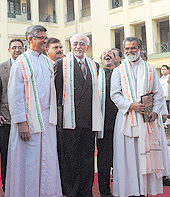 Ansari was born in Calcutta (now Kolkata) on April 1, 1937 though his family belongs to Ghazipur in Uttar Pradesh. He is the grand nephew of former Congress President and freedom fighter Mukhtar Ahmad Ansari. He studied at Shimla's St. Edwards High School, the St. Xavier's College of the University of Calcutta and at the Aligarh Muslim University.
Ansari started his career as a civil servant in the Indian Foreign Service in 1961. He was Permanent Representative of India to the United Nations, Indian High Commissioner to Australia and Ambassador to the United Arab Emirates, Afghanistan, Iran and Saudi Arabia. He was awarded the Padma Shree in 1984. He was also the Vice-Chancellor of the Aligarh Muslim University from May 2000 to March 2002. He is known for his role in ensuring compensation to the victims of the Gujarat riots and pushing for a complete re-look into the relief and rehabilitation for riot victims since 1984. Felicitation: British Prime Minister Gordon Brown with Vice President of India and Chancellor of Delhi University Hamid Ansari, after he was conferred an honorary degree of Doctor of Letters for his achievement in academics, at a special convocation By the Delhi University, Delhi Japanese Prime Minister Shinzo Abe being offered the place of eminence by Vice President Hamid Ansari, Prime Minister Manmohan Singh and Lok Sabha Speaker Somnath Chatterjee after his arrival at the Parliament House to address the members of Parliament in New Delhi


Other activities and NCM

Ansari is a renowned West Asia scholar and has written trenchantly on the Palestinian issue and taken positions inconvenient to the Indian official line on Iraq and Iran. He questioned India’s vote in the International Atomic Energy Agency on Iran’s nuclear programme where India voted against Iran. He said that though the Indian Government claimed to have acted on "its own judgment," this was not borne out by facts.
He is the author of the book Travelling Through Conflict.
Ansari was the chairman of a working group on "Confidence building measures across segments of society in the State," established by the Second Round Table Conference of the Prime Minister on Jammu and Kashmir in 2006. The report of the working group was adopted by the Third Round Table in April 2007. Among other things, the report advocates recognising the right of Kashmiri Pandits to return to “places of their original residence.” This right, it argued, should be recognised without any ambiguity and made a part of state policy.
Ansari became the chairman of India's National Commission for Minorities (NCM) on 6 March 2006. In June 2007, Ansari, in his capacity as NCM chairman, upheld the decision of India's premier educational institution, St. Stephens College, to earmark a small percentage of seats for Dalit Christians. Ansari resigned as NCM chairman soon after his nomination for the post of India's Vice President.
He edited a book titled Iran Today: Twenty - five Years after the Islamic Revolution (ISBN 81-291-0774-).

The Vice President, Shri Mohd. Hamid Ansari with the Chairman of the State Peace and Development Council, Senior General Than Shwe, at Bayintnaung Yeikhta, in Nay Pai Taw On July 20, 2007, Ansari was named by the UPA-Left, the ruling coalition in India, as its candidate for the post of Vice President for the upcoming election. When asked, Ansari said he felt "humbled" over the UPA-Left decision naming him as their candidate. "I am humbled by the confidence reposed in me". Ansari refused to say more when asked about his prospects in the August 10 election.
Ansari secured 455 votes, and won the election by a margin of 233 votes against his nearest rival Najma Heptullah in the Vice-President Election.