Dr. Najma Heptulla (Hindi: नजमा हेपतुल्ला, Urdu: نجمہ ہیپت اللہ) is vice president of BJP an Indian politician and was a Rajya Sabha member from Rajasthan from July 2004 to July 2010. She is the grand-niece of Maulana Abul Kalam Azad, a prominent Indian freedom fighter, a strong proponent of united India, and its first Minister of Education after Independence. She lost to Hamid Ansari in the 13th Vice-Presidential Elections held in August 2007 by 233 votes.

Najma was born in Bhopal, Madhya Pradesh on 13 April 1940. She is married and has three daughters. She holds both a Masters' of Science Degree in Zoology, and a Ph.D. in Cardiac Anatomy from the University of Colorado at Denver. The Deputy Chairman, Rajya Sabha Dr. (Smt.) Najma Heptulla speaking at a discussion on "Parliament as a vehicle of social change", organised on the occasion of International Parliamentary Conference to mark the Golden Jubilee of Parliament of India, in New Delhi 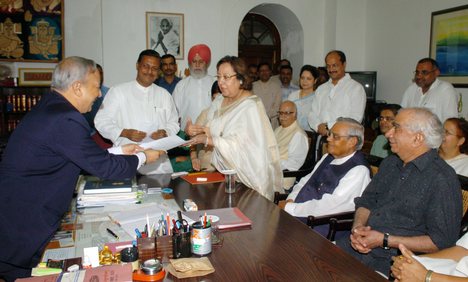 She steadily climbed up in the Indian National Congress party, heading several divisions of the party's grassroots organizations. She was the General Secretary of Congress during 1986 with the additional responsibility of youth activities of the All India Congress Committee and the NSUI. Since 1980, she has been a member of the Rajya Sabha from Maharashtra for four terms at 1980, 1986, 1992, 1998 as Congress candidate. Najma was the Deputy Chairperson of the Rajya Sabha from January 1985 to January 1986 and from 1988 to July 2004.
Heptulla was nominated to head the Indian Council of Cultural Affairs. She also presided over the women parliamentarians' group of the Inter-Parliamentary Union in 1993 and became founder president of the parliamentarians' forum for human development the same year. She was also elected President of Inter-Parliamentary Union, a post which she held from 16 October 1999 to 27 September 2002. Heptulla was nominated by the United Nations Development Programme as its human development ambassador. Heptulla led a delegation to the UN Commission on Status of Women in 1997.
Heptulla has authored book on AIDS titled "AIDS: Approaches to Prevention". She has also written on human social security, sustainable development, environment, reforms for women and on ties between India and west Asia.
Heptulla joined Bharatiya Janata Party in 2004. Media sources reported that she left the Congress apparently due to a strain in relationship with Congress president Sonia Gandhi. Later she alleged that she was personally humiliated by Sonia Gandhi. She declared that she was leaving the party due to the problems with party leadership.