An Indian farmer Haji Kalimullah Khan needs no introduction in the world of mangoes.

Having several awards from mango exhibitions, Malihabad in Lucknow district, in Uttar Pradesh in India, this 70-year-old Khan had grafted a new variety of mango, which he named after world's legendary batsman Sachin Tendulkar.

Mango King and Padma Shri Haji Kalimullah Khan, who is well known for his knowledge about Dusseri Magoes, showed the other side of him. He is not only in love with magoes but also is a ardent cricket fan. 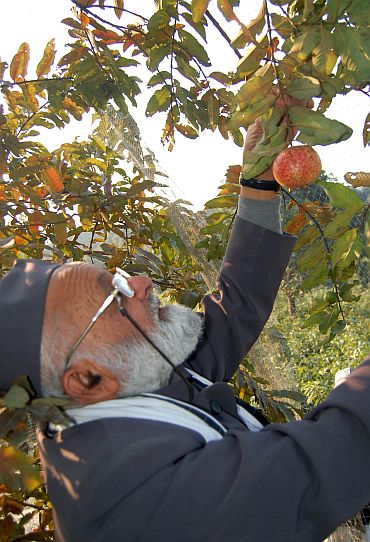 HAJI KALIMULLAH Khan recently won a Padma Sri for growing more than 300 varieties of mangoes of different shapes, sizes and hues on one tree. This rare technique of his has made him popular as ’mango man’ in Malihabad.
Listening to Khan talk about the variety of mangoes grown by him in his orchads, the expression and delight on his face puts across as if he is fiondly referring to his family members.
Khan’s prized tree is about 100 years old, on which he started work in 1987 to develop the craft of growing different varieties on one tree. He named these mangoes as namesakes on his family members who were also mango growers.
After 50 years of incessant efforts, Khan has lately developed five new varieties of mangoes.
He is, however, excited about a ’most delicate’ and ’graceful’ looking latest variety, which he has named as ’Aishwarya’ as it reminds him of Bollywood star Aishwarya Rai.
"It were the children in the family who on seeing the new variety remarked that it resembles the actress in its colour and grace," Khan said.
Among his most precious creations is a tree in the Mughal Garden at the Rashtrapati Bhawan flowering 54 varieties. The tree is 10 feet tall with six-foot-long root and was dug not with axe or spade but by water currents and transported from the prchid to Delhi in five quintiles of mud in 1999 as a present to the then President, said Khan.

The craft developed by him has become a mystery for researchers and agriculturists from the country and abroad who have been left baffled by his work.
The sexagenarian who also finds mention in Limca Book of records for growing the rare tree has the support of his sons in keeping the tradition alive.
Among his regular visitors is the Uttar Pradesh governor, T V Rajeswar who had in 2006 named three of his varieties as Nayantara, Nargis and Jahanara, his son Nazimullah Khan said.
Khan has also cultivated a new variety of all season flowering guava, which on ripening grows as red as apple.