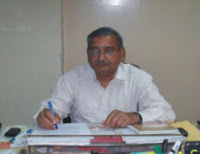 
Professor Mushahid Husain, Department of Physics, Jamia Millia Islamia, New Delhi, is an eminent scientist. Born in 1952 at Moradabad, UP, Professor Mushahid Husain did his postgraduate degree in Physics from Agra University, Agra (UP) in 1975 and joined Lucknow University for his research work. He worked on “Effect of chemical combination of X-ray absorption edges” and was awarded Ph.D. degree in 1982. Same year, he joined Bhopal University as Asstt. Professor, and established a research group there, which later produced couple of Ph.D. students on “Application of Chemical Shift of X-ray Absorption Edge” wherein a new method of characterization of material by chemical shift of X-ray absorption edge was developed.
He is one of the pioneer workers in the area of research on Amorphous Semiconductors and has been instrumental in creating a group of young scientists to work in the field. In amorphous semiconductor, his group is studying the structural, electrical, dielectric, thermal and optical properties of amorphous semiconductors, which have extensive use in the solid state devices. Recently he has taken up research work in conducting polymers and nano materials specifically the carbon nanotubes. He is synthesizing the carbon nanotube by using Electron Cyclotron Resonance Plasma Chemical Vapour Deposition (ECR-CVD), which is a unique method.
Prof. Husain has completed four research projects on amorphous semiconductors funded by University Grants Commission and Department of Science and Technology, New Delhi. He has also conducted two major research projects entitled ECR plasma etching of III-IV group compound materials. In this project his group has developed ECR plasma etching systems. Different gases with different pressure conditions were used for studying the etching of Gallium Arsenide wafers.
He has also studied and developed diffusive cavities for solid-state lasers in one of the esteemed DRDO Project. Recently he has taken up a research project on “Studies of mechanism of new dye laser material and their organic hosts”, funded by DRDO. Here silica gel rod is being prepared by using different dyes, which can be eventually fabricated to laser rods. In addition, a major superconductivity project funded by UGC is continuing since 1989.
Due to his contribution in the semiconductors, the scientific community unanimously elected him the Vice Chairman of Semiconductor Society of India for two consecutive terms (1999 to 2003). He is also holding various positions in different academic societies. In addition, he also held the office of the Vice-President of Indian Physical Society during the session 1990-92. At present he is the secretary of one of the prestigious society i.e. Society for Semiconductor Devices.
He is also the winner of Young Scientist Award/Project of Department of Science & Technology, Govt. of India. He is also the winner of Young Scientist Best Paper Award-1991 from Muslim Association for Advancement of Science (MAAS), Aligarh. He has been awarded the Associate Membership of Third World Academy of Sciences, Abdus Salam International Centre for Theoretical Physics, Trieste,, Italy to undertake the research work on the structural aspect of amorphous semiconductor.
Furthermore, he has also delivered a number of invited talks in various International and national forums. In addition, a number of popular talks on All India Radio and National TV Channel (Doordarshan) have also  been presented  by him. Prof. Husain has also organized a number of National and International Conferences on various aspects of Physics of Materials. He has been Secretary/Joint Secretary of the steering committee of International Workshop on Physics of Semiconductor Devices (IWPSD) since 1997. He was “Organizing Secretary” of “6th International Workshop on Physics of Materials”, held at Jamia Millia Islamia in 1987.    He has research collaborations both at National and International levels.
He had been regularly visiting the International Centre for Theoretical Physics, Trieste, Italy to participate in various academic activities at the centre. Prof. Husain has also worked in High Temperature Superconductivity Laboratory at ICTP, Italy. His visits to University of Cambridge, University of Princeton, New Jersey, UNAM, Mexico, SIRIM, Malaysia, National University, Singapore, resulted in scientific collaborations. In 2005, he visited National Tsing Hua University, Hsinchu, Taiwan for collaborative work on Nanotecnology/ Nanomaterials specially carbon nanotubes.
Prof. Husain has about 100 research papers in reputed International Journals to his credit. He has also edited a book on “Advances in Physics of Materials.” Recently, he has published a review article on “Carbon Nanotubes and its Applications”
Besides his scientific activities, he enjoys the Membership of the Board of Studies of different universities in India.  He was the “Elected Member” of the “Academic Council”, Jamia Millia Islamia, from 2000 – 2003. He is the Member of “Board of Governors” of National Institute of Technology, Kurukshetra University.
Due to his vast teaching and research experience he has the honour of being Referee of various National /International journals. Among these, Physica B, X-ray Spectrometry and Central European Journal of Physics are worth mentioning.
He has three children and lives in New Delhi.