Abdul Razzak is an electrician by profession. Over the last two decades he has developed a number of innovations including a multipurpose twin chambered cooking vessel, a burglar alarm system, a phone with built-in charger, a dual faced fan, a letterbox with an audio alarm amongst many others.

He stays with his family in Bibikulam in the temple city of Madurai, whose literary and historical antiquity dates back over 2500 years. His father was cook and had to toil hard to earn a living for his family, which included his wife, four daughters and three sons. For him, it was a continuous struggle to make ends meet. Owing to this condition, Razzak could only study till matriculation and that too, facing great hardship. Though average in studies, he was bestowed with a good observation and used to notice things, gadgets minutely to understand their functioning. After leaving school he joined a small workshop where he gradually picked up the skills of repairing electrical gadgets, progressively moving into coil winding and fabrication of household items.

The problem of rice steep draining

Razzak noticed the hardship faced by his wife, Anarkali in handling the hot rice cooking pot. He realized that this was a universal problem faced by housewives as well as caterers who cooked rice in open vessels. As these hot vessels/pots could not be comfortably held, tilted or carried, they faced difficulty in completely draining off the residual water from them. They would sometimes burn themselves either by the hot vapours or by accidental splashing of the hot residual water. Across the length and breadth of the country this water has its own use; some discard it as waste, some use it to starch their clothes, while others from low income groups, consume this drained water for its nutritive value. It is locally called kanji (gruel) and is generally consumed in the morning by people before going out to the field for work.

Reflecting on the problems, he started thinking of designing a vessel, which could prevent accidental injuries while making life a bit easier as well. He also noticed that most of the rural folk had only a single cooking stove. This meant that if one wanted to prepare rice and sambar or lentils it had to be done sequentially taking a lot of time.

He then decided to make an improved cooking unit that would facilitate quick and effective cooking of various items simultaneously. It would also provide a facility of filtering the residual water safely while keeping it separately for consumption.

The innovation is a stainless steel cylindrical cooking vessel with two compartments and a lid fitted with two pressure valves. It is also provided with a perforated aluminium plate to be used in one compartment. The two compartments are used to cook rice and sambar simultaneously. In the compartment where rice is boiled, the perforated aluminium plate is kept. On the same side of the vessel, a drain valve or tap is provided for the user to drain out the residual water after cooking. The nutritive value of the residual water or kanji can be then harnessed.

While cooking, when the steam pressure increases inside the vessel, the two pressure valves on the lid open up to release the extra steam. These valves can also be opened to view the status of the cooked rice or to take out the rice grains to check their softness. The vessel is provided with handles on the top as well as on the sides, allowing easy handling. The whole unit weighs one kilogram.

This unit facilitates simultaneous cooking of rice and sambar thereby reducing the total cooking time to almost half. The rice cooked with drained off water has lesser starch levels and is a healthier alternative for the modern lifestyle. This unit, using the same arrangement, can easily be scaled up and built as a large unit suitable for catering operations.

The methods of cooking rice by boiling, steam cooking or pressure cooking and the removal of gruel in conventional cooking are well known. An online article[i] mentions that boiling rice in excess water and discarding the gruel (kanjee) results in loss of some amount of minerals and vitamins. However, in parboiled rice, the nutrients diffuse into the grain and a gelatinized starch coating gets formed over the grain. There are other references of such vessels available in the patent literatures[ii]. However, Abdul Razzak’s innovation distinguishes itself by achieving simultaneous cooking of rice and cereals, at the same time facilitating the draining of residual water. He has filed a patent for this device in 2006. His innovation has been covered by national dailies like The Hindu and various local newspapers. 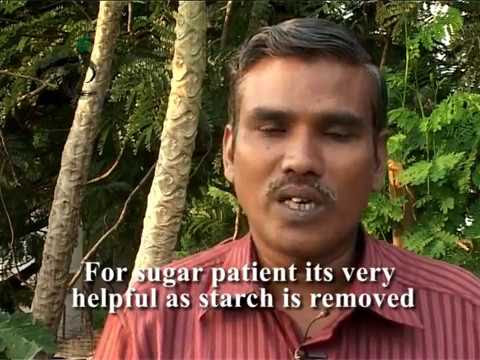 The innovation is viable alternative to those users who wish to cook rice and lentil simultaneously saving their invaluable time. The taste of pot boiled rice with its low starch levels and distinctive taste makes it a part of the Indian culinary tradition. Many people in rural and tribal belts prefer this cooking method over the pressure cooked one.

This unit offers safer handling and complete drainage of residual water. The system is superior to local units that consist of metal cooking units with perforated holes draining into a bucket, commonly available in local Kerala markets.

Abdul Razzak has made and sold over 100 units in and around Madurai. The user feedback has been very good and marketing is mostly through word of mouth. The five liter vessel based system is sold at a cost of Rs 550 and has good dispersion potential among low-income households and caterers.

Razzak has mounted a ceiling fan on a circular ceiling rail so that it can be manually moved to obtain proper air flow in different parts of the room. He plans to make it remote controlled. Similar idea was also given from Abdul Rasheed Qureshi from Delhi.

Dual face table fan
In the existing table fan, Razzak has extended the shaft to the other side and fitted another set of fan blades. This dual table top configuration can be placed centrally. When switched on, it can fan air all around using nearly the same energy.

Burglar alarm system
This system can be installed on a door. When a burglar breaks in, the system would alert the police or the owner by dialing the set of fixed numbers. In case, the system cannot connect to a particular number, it will automatically dial the next number.

Letter box alarm
This is a letterbox with an alarm to alert the presence of letter in the box. The post box consists of an electronic circuit, a letter receiving plate, which senses the letter inside and triggers the circuit to produce an alarm. It is also provided with locking system and twin LED.

He has conceived many other ideas and is working on them. His wife did not support him earlier but given the response he received from the press and the buyers of his innovations, her view changed. Others in the family were also not much appreciative of his creative pursuits. As a result he had to shift to another residence, where he is presently living with his wife and three children. While he was a kid, he had read about Mahmud Ghazni, the ruler from Ghazni (now in Afganistan) who attacked Indian princely states many times and plundered them. He wants to be famous like Ghazni through his innovations. He also idolizes Dr APJ Abdul Kalam for his contributions as a great scientist of the country.

The coconut tree climber which has a steel bar of two-inch width and clamps attached to it. Steel rods shaped like steps can be fitted into the clamp and these clamps are interconnected through a smaller rod, which enables the user to look at the ladder by moving the steps upwards and locking it when not in use.
The ladder is fitted onto the tree as a permanent structure and care is taken not to insert screws or nails into the tree. "Circular clamps can be used externally and hence we can do away with nails at a slightly higher cost," he said. These steps will make it easy for any person, even a woman, to climb a tree. And, if the safety rope is tied around the climber's waist, the coconuts can be picked with both hands," he says.

AN INVENTOR and self styled scientist, M Abdul Razak, has developed nail proof tyres. The 40 year old who has only studied till Class VII, lives with his wife and two children in a slum in Madurai and has been tinkering with household appliances for a long time. He has created the two-side table fan, a patented two in one double boiler cooker etc. His handiwork exists only to meet his home needs.

Razak commutes on his motorcycle and is often forced to halt after a nail lying on the road punctures his two wheeler's tyres. As he is not economically well off, replacing these tyre tubes is very expensive for him, as it costs a minimum Rs 40.

So, he decided to invent a nail-proof tyre and succeeded in it by moulding wire mesh into the tyre. He took a tightly-woven steel wire mesh and wrapped it around the tube of his tyre. He covered the mesh with an old tube. Then he burnt an old tyre and the molten rubber was poured on mesh. “It doesn’t have the professional touch and is a little bumpy but it has been working perfectly on my motorcycle for the last eight weeks”, he explains.