Thangal Kunju Musaliar was born into a middle class family at Kollam on 12 January 1897. His ancestry can be traced to Malik Bin Deenar, the legendary Islamic missionary who came to India in the 8th Century. 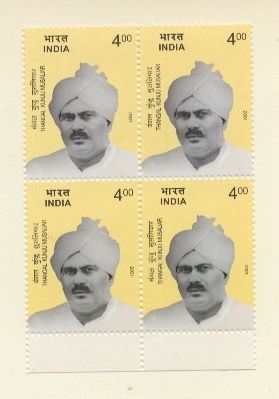 The name Thangal Kunju Musaliar conjures up the memories of an era, when Kerala dominated the cashew export trade. He was a pioneer in this field who build up a vast business empire through impeccable planning and systematic implementation. By 1940, he had the unique distinction of being one of the world's largest employers, employing over 100,000 people. In 1956, while at the peak of his business career, Mr. Musaliar formed the TKM Educational Trust to cater to the educational needs of the people of Kerala. The Trust established institutions such as TKM College of Engineering, TKM College of Arts and Science and TKM Institute of Management.

Mr. Musaliar is the author of the book "Man and the World, Practical Philosophy and Law of Nature" (1949).

While Sir Syed’s movement for awakening Muslims became a victims of reactionary Ulama in the North, a visionary sprang out among Kerala Muslims in the early decades of this century, one who built great institutions by spending his own hard earned money Kayamkulam Yoonus
He employed 25,000 persons in his individual capacity in 26 factories he owned and was named the biggest employer by the American Fortune magazine. Himself not much educated, he set up an engineering college in Quilon and a string of other educational institutions. His Malayalam book on industrial entrepreneurship was translated into English and published by an American publisher. He was a trader, industrialist, philanthropist and above all a visionary.
The string of institutions established by Musaliyar are now planning to claim a deemed University status.
All rolled into one was the persona of A. Thangal Kunju Musaliyar, a man to whom Kerala owes a lot of debt. Born into a middle class business family in 1897, Musaliyar finished his education at the primary level and spent his youthful years in Sri Lanka, Malayasia and Singapore, toiling for the betterment of his family, from where he has earned much of the experiences in his life especially during the first World War period. He had to seek the help of a tutor later in his life to study the English language which was the door to western knowledge.

The town of Kollam at the time was an undeveloped area. Cashew processing and trading was the only economic activity and an Englishman owned this business. No natives had till then had ventured into the business. Musaliar found it as field with great potential in Travancore which was blessed with cashew trees. He began purchasing raw cashew from small scale farmers, processed it and supplied the kernals to the industrialists. Very soon an independent factory of his own came up, which was the first full fledged cashew factory in Kerala. During the second world war the ships carrying cashew were denied insurance protection and naturally the industrialists refrained from exporting their goods. Musaliar took risk and reaped good profits. It was of course a turning point in his industrial career.
He owned 26 factories and gave employment to 25000 people. The American magazine Fortune mentioned the name of Musaliar as the only individual (not in the form of a company) in the world, who employed so many labourers under his own factories. He also owned a tile factory, sawmills, tin factory, workshops and Tug and Barge service. Cashew industry was no doubt, his main concern.
Propagation of knowledge was yet another passion for Musaliyar. He set up a publishing house namely, “Vignana poshini” which was also a publishing house for books of eminent writers like Vaikom Muhamed Basheer. When he started a news paper Prabhatham, (Dawn) it was a new step in the history of Malayalam press. Musaliyar gave complete freedom to his editors to formulate its editorial policy. Eminent person like late A A Rahim, the former central and state minister and later T A Majeed who became a minister in the Government. of Kerala were early associated with the Prabhatham. As it means literally, it stood for the dawn of an independent journalism.
Thangal Kunju Musaliyar strove to educationally uplift all the members of the backward classes.

Musaliyar authored Prayogikadvaytham- Prakruthi niyamam which reflected his outstanding philosophical and intellectual proclivities. It mainly deals with the natural law in relation with the life of man and promoted reason and wisdom. Later the book was translated into English and published by M/s Santa Fe San Vincent Foundation Inc; the famous publishing house in America under the title of Man and the World. It was reviews by The Hindu, The Mail and The Hindustan Times etc. His second book namely Innathe parithasthithiyil communism, socialism, capitalism was an attempt to analyse the shortcomings of the three philosophies on the background of the new world order. In fact, in this work he had discussed all those things with a prophetic vision which is still amazing, in the era of Globalisation and Liberalisation. He realised that only through educational advancement can a society keep itself abreast of the latest developments in the scientific and industrial fields. He set up a trust in 1956 and the first private engineering college in Kerala was started by him in 1958. The foundation stone was laid by the then President of India, Dr Rajendra Prasad. It was fully financed from his own resources. The president lauded Musaliyar’s generosity in his famous words: “If all rich men of our country had come forward like Mr Thangal Kunju Musaliar many of our problems would have been solved automatically.” It was a mile stone in the history of technical education in Kerala. Prof. Joseph Mundessery, the then minister of education, Kerala mentioned in his autobiography at length the circumstances that led to the birth of the Thangal Kunju Musaliyar Engineering College. Prof. Humayun Kabir was at that time in charge of technical education at the Centre. He took very keen interest in the project. Within a short span, the first year BE classes were started and Prof. Kabir himself inaugurated the college.

He later founded an Arts and Science college in 1965. He managed whole thing with his own organising and administrative abilities. With this he paved way for his successors in building up such educational institutions like TKM Institute of Management etc. imparting courses from LKG to post graduation in engineering, management and computer studies. With the birth of Kerala state in 1956 while all the industrialists spent the days and nights for the maximum use of the new industrial opportunities, Musaliyar unmindful of anything else was seriously engaged in the educational advancement of the people utilising his hard earned money.
Though his primary aim was the educational uplift of the society at large, he strove to educationally uplift members of all the backward classes. In this he fully shared the vision of Sir Syed Ahmed Khan when he founded the MAO College.
Musaliar took active part in the social activities. He founded the Travancore Muslim Majlis, an organisation which worked for the social, religious uplift of the Muslims. He also served as the President of the Kilikolloor Jamaat. He was the founder President of a unique popular organisation called, “Kanakshema Samajam” or Public Welfare Society which worked for creating employment opportunities for the poor by providing training to them in different vocational trades.
Musaliar had visited countries like China, Japan, America, Canada, England, Turkey and most of the African countries primarily for business purposes and gained a lot through interaction. This widened his outlook.
Musaliar’s was a colourful personality. He had a rare ability to turn to gold whatever he touched. He wanted to serve the humanity as a whole, even amidst grave difficulties. An instance of this can be seen when he purchased food materials from the open market during the time of second World War, at very high prices and distributed them to his employees. Perhaps it was a very rare incident. He introduced the system of bonus in Kerala by giving festival allowance to his workers.
True to the Islamic concept of wealth, he considered himself as a trustee of the properties which has bestowed on him by God Himself. He believed in spending them for the benefit of humanity. He died on February 19, 1966 but was immortalised by the great institutions which he founded.
The recently concluded birth centenary celebrations of Musaliyar, the doyen of his times, marked the establishment of TKM institute of Communications, TKM Centre for Advanced Learning and TKM Centenary Memorial Research Centre. The institutions have international recognition, especially by UNESCO and similar accrediting organisations. The institutions are part of a plan to found a Deemed University. Mr Shahal Hasan Mussaliyar, elder son of T K M Musaliyar, the President of the TKM Trust follows the foot prints of his great father, towards this goal.