Ashraf 'Alī Thanwī was born as 'Abdul Ghanī in the village of Thāna Bhāwan within the Muzaffarnagar district of Uttar Pradesh, India on August 19, 1863. He was named Ashraf 'Alī by Hāfiz Ghulām Murtazā Pānīpatī, a maternal relative. He belonged to the Shaikhzada community, and his family was well-respected and held a high position in Thāna Bhāwan. His father, 'Abdul Haqq, was a wealthy landowner, devout Muslim, and respected citizen. Ashraf 'Alī Thanwī’s lineage can be traced back to the second Caliph of Islam, 'Umar ibn Al-Khaṭṭāb.

Ashraf 'Alī Thānwī graduated from the Darul Uloom Deoband in 1884. When Rashīd Ahmad Gangohī, one of the founders of the institution, arrived for the graduation ceremony, Shaikhul Hind Mahmūd-ul Hasan informed him that an especially intelligent student was about to graduate. Gangohī wanted to test this student by asking the most difficult questions that he could think of. Ashraf 'Alī's answers amazed and pleased Gangohī, who himself conducted the Dastārbandī Jalsa, the turban-tying ceremony marking graduation.

After his graduation, Ashraf 'Alī Thānwī taught religious sciences in Kanpur for fourteen years. Over a short period of time, he acquired a reputable position as a religious scholar, of Sufism among other subjects. His teaching attracted numerous students and his research and publications became well-known in Islamic institutions. During these years, he traveled to various cities and villages, delivering lectures in the hope of reforming people. Printed versions of his lectures and discourses would usually become available shortly after these tours. Until then, few Islamic scholars had had their lectures printed and widely circulated in their own lifetimes. The desire to reform the masses intensified in him during his stay at Kanpur.
Eventually, Ashraf Ali Thanwi retired from teaching and devoted himself to reestablishing the spiritual centre (khānqāh) of his shaikh in Thāna Bhāwan. Upon this transition, Hājī Imdādullāh remarked, "It is good that you have arrived in Thāna Bhāwan. It is hoped that people will benefit from you spiritually and physically. You should engage yourself in revitalizing our madrasah and khānqāh once more in Thāna Bhāwan. As for myself, I am always praying for you and attentive towards you."

Thanwi’s students and disciples constitute a generation of leading scholars of South Asia. Ashraf Ali Thanwi's disciples settled in all parts of South Asia. Among his disciples are:
Ashraf 'Alī Thānwī was a prolific author. His literary contributions are in the order of eight hundred to one thousand in number, including sermons, discussions, discourses, treatises, and books. Sayyid Sulaimān Nadwī said, "Hazrat [Ashraf 'Alī Thānwī] was a translator and exegete (mufassir) of the Quran; he explained its injunctions and wisdoms. He removed doubts and answered questions pertaining to it." Thānwī was a scholar of hadī (muhaddith) as well, and expounded its intricacies and subtleties. He was a jurist (faqīh) who issued thousands of legal rulings (fatwā) and addressed numerous legal problems in contemporary issues in Islamic law (fiqh). He was described as a moving orator (khaṭīb) and hundreds of his speeches have been published and widely circulated.

While teaching in Kanpur, Ashraf 'Alī Thānwī was reported to have seen 'Abdullāh bin 'Abbās, the cousin of the Prophet Muhammad, in a dream. In this dream, he indicated to him that tafsir should become his primary task. Sayyid Sulaimān Nadwīsaid:


He not only memorized the words of the Qur’aan but also memorized the deeper significance of these words. He was an exceptional reciter (qārī) of the Quran, who had mastered the art of recitation. The uniqueness of his recitation of the Quran was such that each letter was uttered from its proper place of pronunciation (makhraj). There was no imitation or overly exertive effort to make his voice melodious. He would rather recite in his normal voice, which was full of inspiration and absorbed in reflection.

The propagation of Islam was an essential part of Thānwī’s life. He would be highly organized and would plan his tours well in advance. Thousands of people would attend his lectures, which usually lasted between two and five hours. Once he visited Gajner, a village in the Kanpur district of Uttar Pradesh, when the Ārya Samāj had started to preach Hinduism among the Muslims of that area. Thanwi was able to persuade the Muslims there to promise that they would not commit "apostasy" by converting. To prevent the spread of apostasy, he wrote the treatise, Al-Insidād li-Fitnat-il Irtidād ("Putting a Stop to the Temptation of Apostasy").

Thānwī opposed a wide variety of religious practices in South Asia, which he saw as bidah, unacceptable innovation within Islam. These practices, often derived from Sufis, were common among the Sunni Muslims of India, specially the Barelvis. Ashraf Ali Thanwi wrote a number of books that dealt with this subject. His book, Hifzul Imān ("Protecting Faith"), denounced such common acts as worshipping at tombs, asking for intercession from other than God, and believing in the omnipresence of the prophet Muhammad and Muslim saints.

Thanwi's statements drew criticism from a variety of other Islamic authorities. Barelwi scholar Ahmad Raza Khan issued a fatwa of kufr against Thanwi for his alleged disrespect to the prophet Muhammad. Ahmad Raza Khan cited in his fatwa Thanwi's belief that the "knowledge of unseen" possessed by Muhammad could be attained by the epileptics and the insane, the animals and the beasts as w These allegations were seen as refuted by the Deobandis and the refutation endorsed by the predominant Muslim scholars of the time from the world over. 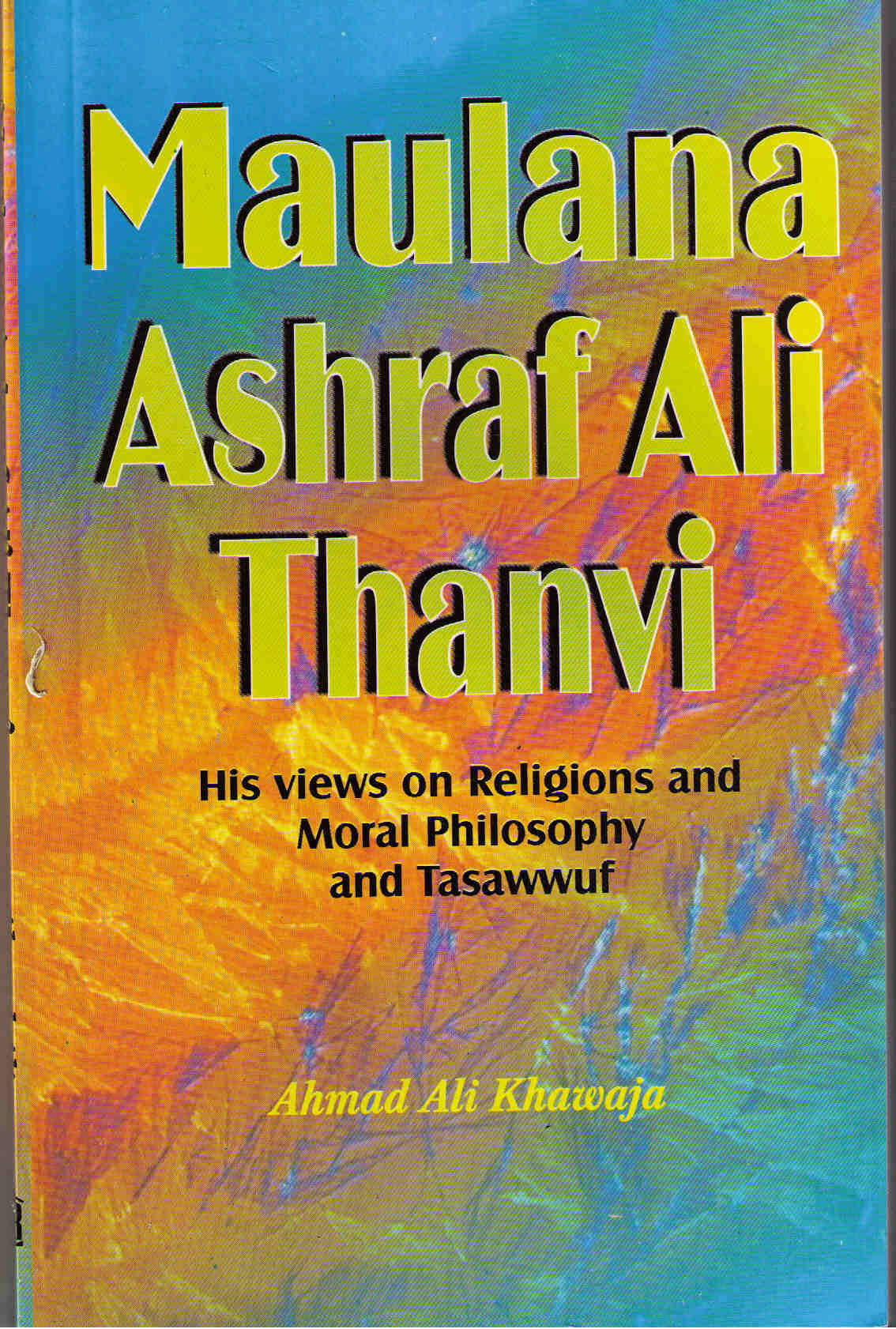 Ashraf 'Alī Thānwī argued, using mainly verses of the Quran, that political rule is only a means of instituting Islam in people's lives and not the purpose of life itself. All modern political notions that contradict the Quran and Hadīth would have to be forsaken, and the "pure" political thought reflected in Quranic sources should guide Muslims in organizing and structuring their governments. He was the Murshid of Maulana Shabbir Ahmad Usmani and Mufti Muhammad Shafi who supported Mohammad Ali Jinnah during Pakistan movement

Ashraf 'Alī Thānwī died in Thāna Bhāwan on July 4, 1943. His funeral prayer was led by his nephew, Zafar Ahmad Uthmānī, and he was buried in the graveyard of 'Ishq-e-Bāzān.

On December 17, 2006 the graves of Ashraf Ali Thanvi and three others were leveled and desecrated in Thana Bhawan, Muzaffarnagar, Uttar Pradesh, India.