Maulana Qazi Mujahidul Islam Qasmi died on 4 April after a long illness. His death has caused a big void that may not be filled easily. He was born in the town of 'Jale' of Distt; Darbhanga, Bihar on 9 October 1936 in an academic and religious family. His father Maulana Abdul Ahad was one of the great disciples of Hazrat Shaikhul Hind Maulana Mahmood Hasan Deobandi. 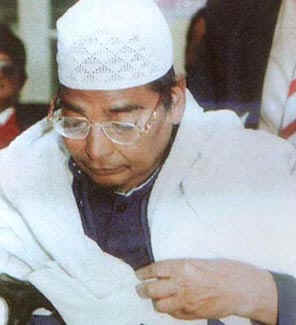 Qazi sahib received his basic education at his home. For further studies he went to different madrasas including Madarsa Mahmoodul Uloom, (Damla) Madarsa Imdadia (Darbhangha) and Madarsa Darul Uloom (Mau Nath Bhanjan). When he could not quench his academic thirst here, he went to Darul Uloom Deoband, the biggest Islamic Centre of learning in India and studied there for four years. He went on receiving Islamic education there from top ranking Islamic scholars such as Maulana Abdul Hafeez Balyawi, Maulana Husain Ahmad Madani, Maulana Husain Bihari, Maulana Fakhruddin Muardabadi and so on.

After completing Fazilat Course from Darul Uloom Deoband, he decided to teach in a madarsa. First time at the suggestion of Maulana Husain Ahmad Madani he joined Jamia Rahmania (Monger) as a teacher. There he taught both higher and lower classes. He possessed an extraordinary ability of teaching. Interestingly he was as much at ease in teaching higher students as he was expert in handling lower classes. That is why he was loved by all the students. He continued teaching for about seven years after completing his Fazilat from Darul Uloom Deoband.

He had a vast experience of social and religious services to the community. In 1962, he joined the Imarate Shari'ah (Patna). His association with the Imarat lasted up to his last breath. Imarate Shri'ah was the only center where the Muslims went and found solutions of their fiqhi problems. But the whole system of Imarat was messy. It was very difficult to serve the Muslims from this platform. People had virtually snapped their relationship with the Imarat. But no sooner than Qazi Sahib joined the Imarat all the departments became active. Through this platform, he gave impetus to the education among Muslims of Bihar. By his untiring efforts the Imarat that was merely an ordinary organization, now turned into an ideal Islamic court. It had a good impact on Muslims of Bihar. The visitors to the Imarat increased and people started taking their religious and social problems to the Imarat. Looking at the reputation of the Imarat for its impact on the social life of Muslims, the government also had to give recognition to its verdicts.

The riots of Bhagalpur in which the Muslims were brutally targetted are an example as to how he worked. Qazi Sahib and his colleagues can't be forgotten whenever this riot will be mentioned. He along with his colleagues did exemplary work for which he will be remembered for generations to come.

It is also worth mentioning that when the supreme court of India imposed the alimony on the husband of a divorced wife in famous Shah Bano case, it was Qazi Sahib who challenged the verdict. He visited the whole country to rouse the public opinion against the verdict that interfered with Muslim personal law.

Qazi Sahib had been an active member of the Board since 1972. When Maulana Minnatullah Rahmani was general secretary he worked with him wholeheartedly. He was elected unanimously as the president of the Muslim Personal Law Board just after Maulana Abul Hasan Nadvi died in 1999. During these two years he developed the board and restored the confidence in it. In this respect the untiring efforts made by Qazi Sahib are remarkable. In the convention of Mumbai he worked hard for highlighting the points, which were targeted by the opponents. He gave the Board a final shape that was characterized in Islamic personal laws. Moreover, he did his best to make the Board more active and effective. Remarkably he established a rich library comprising of the books on national, international and Islamic laws.

The Muslim Majlis Mushawarat was established in 1965. It aimed at bringing all Muslim organizations together. But due to some reasons the Majlis could not serve the purpose.

In the wake of these circumstances it was the need of time to establish an organisation that could bring the Muslim community to one platform. Qazi Sahib launched Milli Council. He restored the confidence of Muslim youth from the platform of Milli Council. Under the cover of TADA Muslims were tortured and targeted everywhere in the country. He played a key role in making public opinion that forced the Government to abrogate 'Tada'. He also reminded the new generation its bright past history and assured them to achieve the success and triumph if they are equipped with education. For this very purpose he marched all over the country carrying the flag of "Karwan-e Azadi " (the caravan of freedom) and "Karwan-e-Ittihad" (caravan of unity).

It can be said that Qazi Sahib was sincere in his mission. He was in the habit of encouraging work that is already being done anywhere. It is said that Qazi Sahib wanted to establish an institution in which the Ulema could be imparted training in English language, so that they could convey the message of Islam to those people who speak and understand only English. While he was planning to do the same, an institution namely MMERC (Delhi) came up. Thus his dream was materialised. That is why Qazi Sahib not only scrapped his plans but also he praised this noble step taken by Maulana Badruddin Ajmal Qasmi and appreciated it wholeheartedly.

It is only Qazi Sahib who introduced a unique system of Islamic courts in a country like India. Qazi Sahib spread its network throughout the country. Muslims go there and solve their problems in the light of Shari'ah rather than going to the regular court where the judgement is based on secular law.

He founded Fiqh academy in 1989 and remained general secretary till his last breath. He tried to solve the new problems in the light of Islamic Shari'ah. He united the Ulema of different sects. He gave fiqh training to students of different madaris. The academy has held almost 13 fiqhi seminars in which 40 new problems have been discussed. Under his supervision the Encyclopaedia of Fiqh (Arabic) has been translated into Urdu. It is yet to be published. The academy also publishes a magazine namely Bahth-o Nazar which contains, fiqhi articles, important fatawas and the judgments given in Islamic courts.

He was honoured with many awards by different organisations and institutions. Some of them like Abul Hasan Award, Shah Wali Ullah Award and community leadership awards are worth mentioning.

Along with different abilities and qualities he was also a good orator. Qazi sahib surpassed his contemporaries in the field of academic works. He established Fiqh Academy in 1998. He left no stone unturned to make it beneficial for the Muslims. He held training camps for the students studying in numerous Madrasas. Those camps used to be virtually a unique guide for the students to study on new problems in this progressive age. In such seminars he used to invite the Islamic scholars from around the country and abroad. Apart from this, he has written about forty books. Nine of them are in Arabic language, one in English and twenty-six in Urdu have been published. His Arabic books have been published in Lebanon and Kuwait. Sinwanul Qada is one of them. They have received great appreciation from Ulema and academic personalities. The remarkable and tremendous work of Qazi Sahib is his book in Arabic Alwaqf and Annizamul Qadai. Both of them have been published in Lebanon.

Though Qazi sahib followed the Hanafi Fiqhi school, he adopted the middle path in solving new problems. He did not do as the blind followers of sects do, that they always stick to only one stand and ignore the pressure of events and the changing world. He always maintained the balance in each and every issue of the Shari'ah. He took the views that the juziyyaat may be changed according to the circumstances in the light of rules extracted from the Qur'an and Hadith.

It is Qazi Sahib who called the Muftis and Ulama and held a seminar at Darul Uloom Al Islamia Basti. After having a heated discussion among the Ulema it was decided that using television, Internet and modern tools for Islamic purpose is allowed, and divorce pronounced by a drunk person will not be valid.

Regarding new problems of social life he was of the opinion that individually no body can do ijtehad but collectively we can do the same if the time needs. Ijtihad in the subcontinent stopped with the death of Shah Waliullah Dehlawi. But it was Qazi Sahib who revived this practice and did tremendous work that was the need of time. Qazi Sahib will always be remembered for his wisdom, talent, God-gifted ability of solving the new problems and his great works he did for the Muslim community.