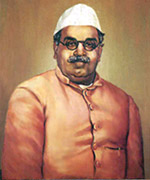 Early life
He was born on 18 February 1894 in the village of Masauli, in Barabanki district, United Provinces, India, the eldest of four sons of Imtiaz Ali Kidwai, a middle-class zamindar (or landowner) and government servant, and his wife, Rashid ul-Nisa, who died during his early childhood. He received his early education from a tutor at the home of his uncle, Wilayat Ali, a politically active lawyer, and in the village school. He attended the Government High School, Barabanki, until 1913. He then attended the Mohammadan Anglo-Oriental College, Aligarh, where he graduated BA in 1918. He began work towards the degree of LLB, but, swept up by the khilafat and non-co-operation movements in 1920–21 (the first of Mahatma Gandhi's major all-India satyagraha, or non-violent civil resistance, movements) and jailed for his participation, he never completed it. He married Majid ul-Nisa in 1919. They had one child, a son, who died at seven years of age.

After attending Muhammedan Anglo-Oriental College in Aligarh, Kidwai entered politics through the Khilafat movement.
After his release from jail in 1922 Kidwai moved to Allahabad, where he became attached to the Nehru family, as private secretary first to Motilal Nehru, then to Jawaharlal, to whom he remained devoted thereafter. Kidwai, a virtuoso politician, took the leading organizational role in numerous ventures: in the election campaign of the Swaraj Party (an electoral offshoot of the Congress) in 1926, during which he himself was elected to the Central Legislative Assembly of British India; as chief whip of the Congress in the central legislative assembly from 1926 to 1929; in the satyagraha and agrarian no-tax movement in the United Provinces in 1930–31; as general secretary of the United Provinces Congress committee in 1931, then president, from which position he led the organization of the campaign for the provincial assembly elections of 1937; in his subsequent organization of the 1946 elections; and in many other roles.
After the passage of the Government of India Act 1935, he held an office for the Indian National Congress.
From 1930–31 until the independence of India in 1947 Kidwai was, alongside Govind Ballabh Pant, the leading figure in Congress politics in the United Provinces and in the governments formed in that province under the terms of the Government of India Act of 1935 in 1937 and 1946. As revenue minister in the first government he was responsible for piloting the United Provinces Tenancy Act, which modified some of the burdens of the tenantry, presaging the post-independence abolition of the zamindari land system. In the 1946 government he was second to Pant as home minister. Kidwai had been Pant's political manager.
In 1937, Kidwai became a minister for Revenue and Prisons in Govind Ballabh Pant's cabinet in the United Provinces of Agra and Oudh (UP) under the Provincial Autonomy Scheme. Under his stewardship, UP became the first province to curtail the zamindari system. In April 1946, he became the Home Minister of UP.

Nehru called Kidwai to join him in the central government as minister for communications on 15 August 1947.
Kidwai was a major ally of Jawaharlal Nehru, the first Prime Minister of India. After India gained independence from the British Raj in 1947, Kidwai became India's first Minister for Communications. (Kidwai and Abul Kalam Azad were the two Muslims in Nehru's central cabinet.)
After the first general elections in 1952, Nehru entrusted Kidwai with the portfolio of Food and Agriculture at a time when there was food rationing in the country.
In Delhi Kidwai, ever the political operative, soon became embroiled in the national struggle for power between Nehru and the supporters of Sardar Patel. He was one of the principal founders of the Kisan Mazdoor Praja Party, which broke away from the Congress to contest the elections of 1952 on its own. However, Kidwai vacillated, resigned briefly from the Congress, then returned to it to contest and win a parliamentary seat, after which he rejoined Nehru in the central government on 13 May 1952 as minister for food and agriculture. In this role he was credited with implementing several measures that prevented a major food crisis. He also played a critical role in the Kashmir imbroglio in 1953, involving the displacement of Sheikh Abdullah from the prime ministership of the state.
Kidwai was the only prominent Congress Muslim politician in the thoroughly communalized political atmosphere of his home province. All his followers were secular-minded Hindus from many different castes, whose political views ranged from conservative to socialist. Kidwai himself held to no ideology other than his devotion to the cause of Indian emancipation from British rule, though, like his mentor, Jawaharlal Nehru, he was loosely associated with those on the putative left of the Indian spectrum. While generous to all who sought his help, he was also a clever, manipulative, and conspiratorial political opponent in factional conflicts within the Congress organization, who at times engaged in legally dubious tactical moves against his rivals. A devoted band of followers in the United Provinces remained loyal to him throughout his life. In a humorous play on English, they proclaimed themselves ‘Rafians’, though after his departure to the central government they were reduced to a small minority in the provincial party organization and dispersed in factions within and parties outside the Congress.

Kidwai suffered heart failure, precipitated by an attack of asthma, in the midst of a speech at a public meeting in Delhi and died shortly thereafter, on 24 October 1954. He was buried in his home village, Masauli, where a Mughal-style mausoleum was built over his grave. A formidable fund-raiser for Congress movements and elections, he distributed his largesse to all and sundry, but died in debt, leaving behind only a decaying house in his home village.

Since 1956 Rafi Ahmed Kidwai Award is given by ICAR once every two years to a scientist who has made outstanding research contributions in the field of agriculture, animal husbandry and allied sciences(i.e. fisheries, aquatic sciences, and public health microbiology). The award consists of a Gold medal, a citation, and a cash prize of 300,000 Indian rupees.
In Kolkata, a major street has been named after him to glorify this hero of the Indian independence movement.