Ustad Bade Ghulam Ali Khan (Devanagari: Shahmukhi: بڑے غلام علی خان, Urdu: بڑے غلام علی خان) (c. 1902 – 25 April 1968) was a Hindustani(Undivided India) classical singer. He belonged to the Patiala Gharana of classical music., and is considered to be an important representative of the Hindustani music tradition in the early and mid 20th century. 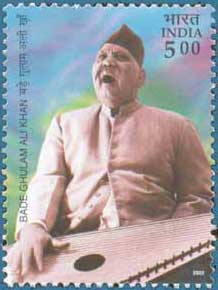 Bade Ghulam Ali was born in Kasur, Punjab, in Pakistan. His father was a famous singer, Ali Baksh Khan, in a West Punjabi family of musical heritage.
At the age of seven, he learned sarangi and vocal from his paternal uncle Kale Khan, who was also a singer and composer of repute, and after his death he picked up a few compositions from his father who had re-married by this time. Bade Ghulam Ali thus mainly trained himself in the style of his late uncle. This tenure lasted for almost three years. It was at this juncture that he improvised the musical instrument "Kanoon" to the present "Swaramandal" which became his trademark. When aged about 21, he moved to Benaras where he accompanied a courtesan named Zarabai on the sarangi and started to perform in public. He died on 23rd April 1968.

Though Khan started his career by playing the sarangi, he also used to sing a few compositions of his late uncle and perhaps his only teacher. He became popular as a vocalist after his debut concert in Kolkata. Khan amalgamated the best of four traditions: his own Patiala-Kasur style, the Behram Khani elements of Dhrupad, the gyrations of Jaipur, and the behlavas (embellishments) of Gwalior. His voice had a wide range, spanning three octaves, effortless rendition, sweetness, flexibility and ease of movement in all tempi.
For a long time, Bade Ghulam Ali stayed away from singing in films despite requests and persuasions from well known producers and music directors. However, he was coaxed and convinced by K. Asif to sing two songs based on ragas Sohni and Rageshree for the 1960 film Mughal-e-Azam, in which his voice was represented as Tansen's by the music director Naushad. In order to dissuade both Asif and Naushad who actually hit upon the idea to utilise the "golden voice" in the film, he demanded a very, very high price, reportedly Rs. 25,000/- per song, when the rate for popular and star playback singers such as Lata Mangeshkar (b.1929) and Mohammed Rafi(1925-1980) was below Rs. 500/- per song.
Khan was awarded the Sangeet Natak Akademi Award and the Padma Bhushan in 1962.
Khan was married to Ali Jiwai, who died in 1932. Khan's son, Munawar Ali Khan (1930–1989), was a classical singer. His grandson, Raza Ali Khan, is also a Hindustani classical singer.
Khan died in Hyderabad at Basheerbagh Palace in 1968, after a prolonged illness which left him partially paralysed in his last years. He continued to sing and perform in public with the support of his son Munawar until his death.

Today, the Bade Ghulam Ali Khan Yaadgar Sabha, founded by his disciple Malti Gilani, keeps his music and memory alive. It aims to promote Hindustani classical music and organises many concerts to this end. Its primary aim, however, is to provide medical aid to ailing musicians. The Sabha organises a Sabrang Utsav every year in the memory of the maestro. Under his pen name, Sabrang, Khan left numerous compositions.