He was born on October 10, 1844 in Bombay (now Mumbai), India. He was the son of Mullah Tyab Ali Bhai Mian, a Sulaimani Bohra, and a scion of an old Cambay emigrant Arab family.
He passed the London Matriculation and joined the Middle Temple. He became the first Indian Barrister in Bombay in April, 1867. He accepted a Judgeship of the Bombay High Court in 1895. In 1902, he became the first Indian to hold the post of Chief Justice in Bombay. 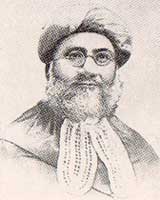 Badruddin Tyabji (Tyab Ali) was born in Bombay on October 10, 1844. His father was the scion of an old Cambay emigrant Arab family. After passing the London Matriculation he joined the Middle Temple, became a Barrister (April 1867) - The First Indian Barrister in Bombay -and rose rapidly in the profession. In 1895, as his health failed he accepted a Judgeship of the Bombay High Court. This, as Sir Pherozeshah Mehta stated, was as enthusiastically welcomed by the Hindus and the Parsis as by the Muslims. He acted as Chief Justice in 1902, the first Indian to hold this post in Bombay. He was known as a great Judge and for his courage and impartiality, typically shown by his granting bail to Tilak in a sensational case after it had been rejected thrice by others, and by admonishing eminent British counsels for denigrating the Indian National Congress and Indian character. He said, "I have always regarded it (Congress Presidentship) as the highest honour, higher than being on this Bench ... let me tell the Counsel that in my Court no contemptuous reference to that body will be permitted." Badruddin entered public life after three years at the Bar. In July 1871, he was prominent in the agitation for an elective Bombay Municipal Corporation, and topped the list of those subsequently elected on that body. From then on, Badruddin Tyabji, Pherozeshah Mehta and Kashinath Telang were popularly known (in that order) as "The Triumvirate", "The Three Stars", of Bombay's public life. In 1882 he became a Member of the Bombay Legislative Council, but resigned in 1886 for reasons of health. In 1885 he helped to found the Bombay Presidency Association and virtually ran it all by himself. Soon afterwards, the Indian National Congress held its first session in Bombay under its auspices; and Badruddin and Camruddin (his brother) were among its delegates. Urgent business in Cambay prevented their attendance, which their opponents exploited, alleging that Muslims were boycotting the Congress. Badruddin vigorously denied this, declaring that he had 'denounced all communal and sectarian prejudices." He missed the second Session also due to ill health, but was unanimously elected President of its third Session in Madras (1887). Camruddin and he were principally responsible for establishing the Anjuman-I-Islam in Bombay (1876) "for the betterment and uplift of Mussalmans in every direction". Its working principle, defined by Badruddin, was "not to take the initiative when the interests of Mussalmans were common with the rest of the people of India, but to consider it its duty to take initiative if the interests of Mussalmans alone were affected, or if they were affected more than those of others" (1887). Badruddin's own education and background, a harmonious blend of the East and the West, made him acutely conscious of its lack, particularly among the Muslims. Indian attention, he thought, was too exclusively focussed on politics. He felt that an advanced type of representative Government was useless if the majority was ignorant. Therefore, he campaigned against "Purdah" all his life, holding that it went far beyond the Quranic injunctions. His was the first Muslim family to discard it; his daughters were the first to be sent abroad for education. He supported the Age of Consent Bill (1891), despite Hindu and Muslim opposition. Badruddin's all pervasive intellectual and personal distinction enabled him to exert considerable influence for worthy causes on the more enlightened Englishmen, without loss of personal or national dignity; in fact, with an accretion to both. He was not only, as Mahatma Gandhi wrote, "......for years, a decisive factor in the deliberations of the Congress" but one of its creators. It gained its national character by Muslim participation largely through his influence. In this the difference between his outlook and that of Sir Syed Ahmad Khan, the other outstanding Muslim leader of the time, was striking. On Badruddin fell the main burden of counteracting the Two-Nation theory. This he did without abating a jot of his zeal' for the advancement of the backward Muslims; and it was most remarkable that he succeeded in obtaining widespread non-Muslim co-operation for it. Among Muslims, Badruddin was the first to create a secular political consciousness; and nationally he was a pioneer in making it the Indian ideal.

"Be moderate in your demands, be just in your criticism, be accurate in your facts, be logical in your conclusions, and you may rest assured that any propositions you may make to our rulers will be received with that benign consideration which is the characteristic of a strong and enlightened Government". — From the Presidential Address - Badruddin Tyabji I.N.C. Session, 1887, Madras