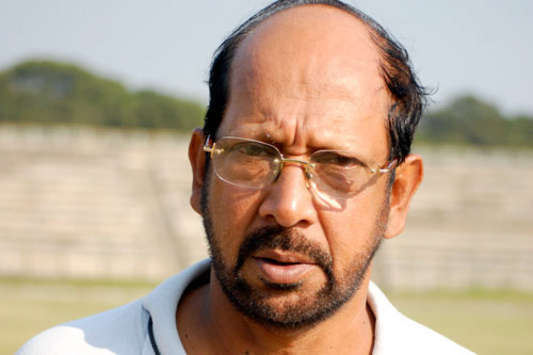 
Former Bengal State Team Coach, Shabbir Ali has been conferred the Dhyan Chand Award for the year 2011.
He is thankful to god for being conferred this award,  He said "Thank God, I got the DHYAN CHAND AWARD (Life Time Achievement) from Ministry of Sports, Govt. Of India for 2011,”
Dhyan Chand Award is India’s highest award for lifetime achievement in sports and games. The award is named after the legendary Indian hockey player Dhyan Chand. The award was initiated in 2002. The award carries a cash prize of INR 5 lakh (500,000 rupees), a statuette,ceremonial dress and a scroll of honour.

Shabbir Ali’s latest achievement’s was guiding the Bengal State Team to consecutive Santosh Trophy title in 2010 and 2011. He had a successful stint as a player for the national team and had even captained the side for few years before he retired as a player.
After his retirement, he remained attached with football and obtained Trainer B and A license from German Football Association before completing Olympic Solidarity Course (FIFA-IOC) in 1996.
Thereafter, he achieved success within a short span of time with many clubs one of them being Mohammedan Sporting Club. He made them the Champion Club of India having won four tournaments and finishing runners-up in two others in the 1991-92 seasons.

He also guided Salgoacar SC – Goa to win almost all trophies in a year other than the Calcutta clubs. The 55 years old Coach was also instrumental in steering India to SAF Championship victory in 1995 after India failed to win the cup in its three previous editions. Known to take up challenges, he recently joined CFL Premier Division side Calcutta Port Trust as a coach.
By winning the Dhyan Chand award, he thereby became the first footballer to be conferred this honour.


The President of Abbas Union Football Club, Darushifa, Hyderabad, Shabbir Ali also a famous striker of East Bnegla and Mohammedan Sporting club in his age and got Top Scorers awards many times in Kolkata Football League.
The former Mohammedan Sporting, Port Trust, Vasco, ITI, Salgaocar (NFL Winner), Fransa S.C, Churchill S.C, Mahindra United etc. team coach Shabbir Ali has given the recognition of cempetence to coach in the pro-league for 2011-2012 by AFC and as a B certificate holer of AFC he can atttend the AFC ' a' coaching course before the end of 2012.