Javed Akhtar (Urdu: جاوید اختر) (Hindi: जावेद अख़्तर) (born 17 January 1945) is a poet, lyricist and scriptwriter from India. Some of his most successful work was done in the late 1970s and 1980s with Salim Khan as half of the script-writing duo credited as Salim-Javed. Akhtar continues to be a prominent figure in Bollywood and is one of the most popular and sought-after lyricists. 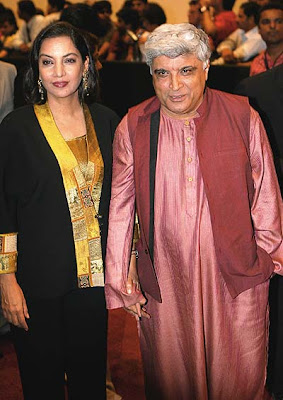 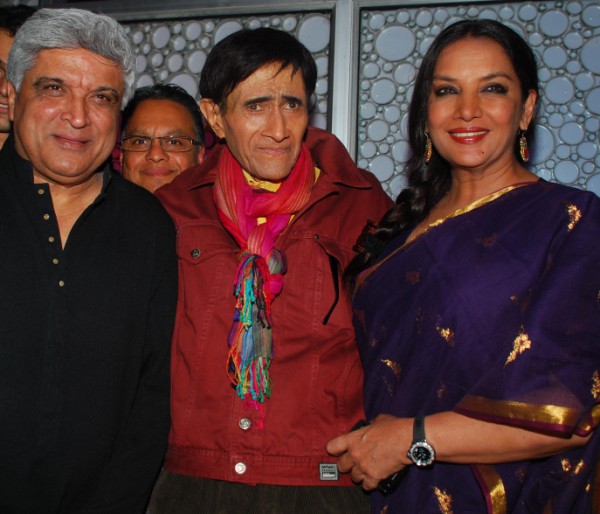 He was born as Jadoo Akhtar in bihar state (now Gwalior, Madhya Pradesh) to Jan Nisar Akhtar, a Bollywood film songwriter and Urdu poet, and singer Safia Akhtar, a teacher and writer. His original name was Jadoo, taken from a line in a poem written by his father: "Lamba, lamba kisi jadoo ka fasana hoga". He was given an official name of Javed since it was the closest to the word jadoo. His lineage can be traced back to seven generations of writers. The Urdu poet Majaz was his maternal uncle and the works of his grandfather, Muztar Khairabadi, are looked upon as a milestone in Urdu poetry. By him, he is also connected to Maulana Fazl-e-Haq Khairabadi, the philosopher, poet, religious scholar who was one of the main figures of the Indian Rebellion of 1857, and who edited the first works of Ghalib. Akhtar has one sibling; his younger brother is U.S.-based Indian psychoanalyst Salman Akhtar.
After his birth, his parents moved to Lucknow, Uttar Pradesh, and later to Aligarh. Young Javed Akhtar lost his mother at a young age and his father frequently moved back and forth between Lucknow and Bombay, so he and his brother spent most of their time with relatives.
At the age of eight, he was admitted to the sixth class at the Colvin Taluqdars' College in Lucknow. From Lucknow he moved to Aligarh to live with his maternal aunt, Hamida Salim.
He took admission in a school of Aligarh, the Minto Circle, a part of Aligarh Muslim University. He completed his matriculation from Aligarh Muslim University. After completing his matriculation, Akhtar attended Saifiya College in Bhopal where he earned a B.A.. He was a keen debater in college and won the Rotary Club Prize frequently. Akhtar arrived in Mumbai on 4 October 1964. In his early years living in Mumbai, he managed to write the dialogue for a minor film for Rs. 100. Occasionally, he used to work as an assistant. He got a job as a scriptwriter on Yakeen which flopped. Akhtar then joined with his friend Salim Khan to develop the story for Adhikar. Salim-Javed were hired by G. P. Sippy's Sippy Films as resident screenwriters and produced the screenplays for successful films like Andaz, Seeta Aur Geeta, Sholay and Don.
Akhtar used to write his scripts in Urdu, were then written out in Hindi by his assistant. Another assistant would type out a one line summary in English. His association with Salim Khan lasted until 1980. After this Akhtar wrote some scripts on his own, but mostly moved into writing lyrics for films, in which he achieved success.
Akhtar has also attempted more serious Urdu poetry aside from writing lyrics for movies. A major set of his works were compiled in Tarkash, which was also rendered into audio in his voice. Singers such as late Jagjit Singh and late Nusrat Fateh Ali Khan have sung some of his non-movie poetry.
Javed Akhtar was also a judge alongside Anu Malik, Kailash Kher and Sonali Bendre on India's singer hunt Indian Idol 4. He is also on the advisory board of the Asian Academy of Film & Television.

Akhtar was born a Muslim, but later became an Atheist as he stated in his speech "Spirituality, Halo or Hoax". His son Farhan is married to a Hindu girl called Adhuna. Akhtar was married to Honey Irani, a script-writer for Hindi films, with whom he had two children Farhan Akhtar and Zoya Akhtar, both film directors. The father and son duo have worked together in films such as Dil Chahta Hai, Lakshya, Rock On!! and Zindagi Milegi Na Dobara along with Zoya.
After Javed's divorce with Irani, he married actress Shabana Azmi, the daughter of another Urdu poet, Kaifi Azmi.

Javed Akhtar was awarded the Padma Shri by the Government of India in 1999 and received the Padma Bhushan in 2007. Akhtar has also won the Filmfare Award fourteen times, seven times for Best Script, and seven times for Best Lyrics for "Ek Ladki Ko Dekha..." in 1942-A Love Story, "Ghar Se Nikalte Hi..." for Papa Kahte Hain, "Sandese Aate Hain...." for Border, "Panchhi Nadiyan Pawan Ke Jhonke..." for Refugee, "Radha Kaise Na Jale" for Lagaan, "Kal Ho Na Ho" for Kal Ho Na Ho , "Tere Liye..." for Veer-Zaara and "Jashn-e-Bahara" for Jodhaa Akbar.
Akhtar has won the National Award five times. In 1996 he won for Best Lyricist for the film Saaz and in 1997 he won the National Award for Border. He again won the National Award in 1998 for Godmother. In 2000 he again won the National Award for the song "Panchhi Nadiyan Pawan Ke Jonke..." from the film Refugee and in 2001 for "Radha Kaise Na Jale" from Lagaan.
He has won the 1995 and 1997 Screen Videocon Awards. He also won first Zee Award for Best Lyricist for "Sandese Aate Hain" from the film Border. He was awarded a Videocon Screen award as well as a Lux Zee Cine award for "Panchhi Nadiyan Pawan Ke Jhonke..." for Refugee.
In 2001 Akhtar received the "National Integration Award" from the All India Anti-Terrorist Association and the Avadh Ratan from the U.P. Government. He also won the 2003 Hakim Khan Sur Sammaan Award from the Maharana Mewar Foundation, Udaipur.

Movies written as part of the Salim-Javed team are marked as such.

He has been awarded the Filmfare Best Lyricist Award 8 times.