Qurrat-ul-Ain Haider (Urdu: قراۃ العین حیدر; January 20, 1928 – August 21, 2007) was an influential Urdu novelist and short story writer, an academic, and a journalist. One of the most outstanding literary names in Urdu literature, she is most known for her magnum opus, Aag Ka Darya (River of Fire), a novel first published in Urdu in 1959, from Lahore, Pakistan, that stretches from the 4th century BC to post [[partition of India]. Popularly known as "Ainee Apa" among her friends and admirers, she was the daughter of writer Sajjad Haidar Yildarim (1880–1943). Her mother, Nazar Zahra, who wrote at first as Bint-i-Nazrul Baqar and later as Nazar Sajjad Hyder (1894–1967), was also a novelist and protegee of Muhammadi Begam and her husband Syed Mumtaz Ali, who published her first novel.
She received the 1967 Sahitya Akademi Award in Urdu for Patjhar Ki Awaz (Short stories), 1989 Jnanpith Award for Akhire Shab Ke Humsafar, and the highest award of the Sahitya Akademi, India's National Academy of Letters, the Sahitya Akademi Fellowship in 1994. She also received the Padma Bhushan from the Government of India in 2005. Born on January 20, 1926 in Aligarh, Uttar Pradesh, (though her family were from Nehtaur, UP), Qurrat-ul-Ain Hyder is one of the most celebrated of Urdu fiction writers. She was named after a notable Iranian poet Qurrat-ul-Ain Tahira. Qurratul Ain, translated literally means 'solace of the eyes' and is used as a term of endearment. A trend setter in Urdu fiction, she began writing at a time when the novel was yet to take deep roots as a serious genre in the poetry-oriented world of Urdu literature. She instilled in it a new sensibility and brought into its fold strands of thought and imagination hitherto unexplored. She is widely regarded as the "Grande Dame" of Urdu literature.
After graduating from Lucknow University's Isabella Thoburn College, she moved to Pakistan in 1947, then lived in England for some time before finally returning to India in 1960. She lived in Bombay for nearly twenty years before shifting to Noida near New Delhi, where she had been staying till her demise. She never married.
She migrated along with her family members to Pakistan in 1947 at the time of independence, but some years later decided to go back to India, where she had since lived. She worked as a journalist to earn her living but kept publishing short stories, literary translations and novels regularly, by now almost thirty in number.She was Managing Editor of the magazine Imprint, Bombay (1964–68), and a member of the editorial staff of the Illustrated Weekly of India (1968–75). Her books have been translated into English and other languages
Hyder also served as a guest lecturer at the universities of California, Chicago, Wisconsin, and Arizona. She was visiting professor at the Urdu Department at Aligarh Muslim University, where her father had earlier been a registrar. She was also Professor Emeritus, Khan Abdul Ghaffar Khan Chair at Jamia Millia Islamia, New Delhi. A prolific writer (she began to write at the young age of 11), her literary works include some 12 novels and novellas and four collections of short stories. Hyder has also done a significant amount of translation of classics. Her own works have been translated into English and other languages.
Aag Ka Duriya (River of Fire), her magnum opus, is a landmark novel that explores the vast sweep of time and history. It tells a story that moves from the fourth century BC to the post-Independence period in India and Pakistan, pausing at the many crucial epochs of history. Aamer Hussein in The Times Literary Supplement wrote that River of Fire is to Urdu fiction what One Hundred Years of Solitude is to Hispanic literature. Aag Ka Darya is essentially a novel written from the point of view of the believers of Pakistan and depicts their agony in detail, specially towards the climax of the novel.
Her other published works include: "Mere Bhi Sanam Khane", 1949; "Safina-e-Gham-e-Dil", 1952; Patjhar ki Awaz (The Voice of Autumn), 1965; Raushni ki Raftar (The Speed of Light), 1982; the short novel Chaye ke Bagh (Tea Plantations), 1965 (one of four novellas including Dilruba, Sita Haran, Agle Janam Mohe Bitiya Na Kijo, exploring gender injustice) ; and the family chronicle Kar e Jahan Daraz Hai (The Work of the World Goes On).
Compared to her exact contemporaries, Milan Kundera and Gabriel García Márquez, the breadth of her literary canvas, her vision and insight, transcend time.
Amitav Ghosh writes that "hers is one of the most important Indian voices of the twentieth century."
Her first short story, Bi-Chuhiya (Little Miss Mouse), was published in children’s magazine Phool and at the age of nineteen wrote her first novel "Mayray Bhee Sanam khanay". 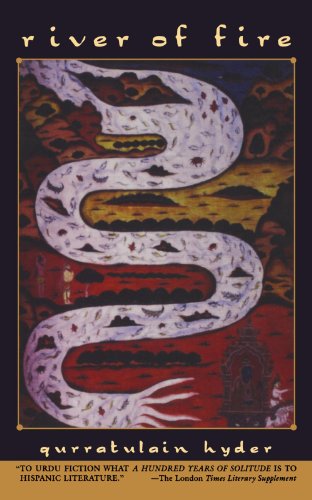 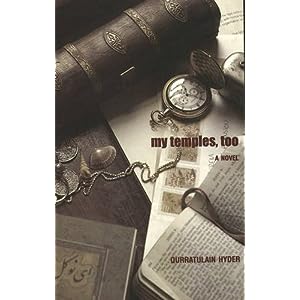 She received the Jnanpith Award in 1989 for her novel Aakhir-e-Shab ke Hamsafar (Travellers Unto the Night). She received the Sahitya Akademi Award, in 1967, Soviet Land Nehru Award, 1969, Ghalib Award, 1985. She won Sahitya Akademi Award for her collection of short stories Patjhar ki Awaz (The Sound of Falling Leaves) in 1967. The Urdu Academy in Delhi conferred upon her the Bahadur Shah Zafar Award in 2000. She was conferred Padma Shri by the Government of India in 1984, and in 2005 she was conferred the Padma Bhushan the third highest civilian honor awarded by the Government of India, for her contribution to Urdu Literature and Education.

Qurratulain Hyder died in a NOIDA hospital, near New Delhi, India on August 21, 2007 after a protracted lung illness. She has been buried in the Jamia Millia Islamia cemetery, New Delhi.
Her death has been condoled by the President and Prime Minister of India, and Chief Minister of her home state Uttar Pradesh.

It is believed that due to her high stature in social circles no criticism about her vision emerged although she was not infallible. Eminent Urdu novelist Paigham Afaqui has pointed out in his well appreciated article 'Aag Ka Darya - chand sawalat' that because she wrote Aag Ka Darya at an early age and because she was encircled by those who did not stay back in India at the time of partition she could not appreciate the point of view of those who did not migrate. After this article of Paigham Afaqui, she indeed reviewed such content and deleted in the English translation of the novel.