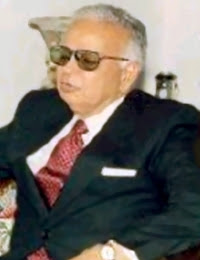 Mohammed Fazal (born July 2, 1922) was the Governor of Maharashtra from October 10, 2002 to December 5, 2004.
He is known for his controversial suggestion to the then Chief Minister of Maharashtra, Sushilkumar Shinde to legalise prostitution.

Born in a well-known zamindar's (landlord's) family, he studied at the Allahabad University and later at the London School of Economics at the University of London.
In 1977, he was appointed the Secretary of Industrial Development, Government of India. He served the Planning Commission as its senior-most member from April 1980 till his resignation in January 1985. Thereafter, Mr. Fazal was the founding chairperson of Hughes & Hughes Chem Ltd.
In 1999, he was appointed the Governor of Goa a post he held until he was appointed as Governor of Maharashtra.