Khan was born at tehsil Aonla, Bareilly, Uttar Pradesh in a Muslim Rajput family. His father a was teacher in a state school at Aonla. He received his early education at Bulandshahr and later studied at Aligarh Muslim University. Khan started his career as a literary assistant at Anjuman Tarraqqi-e-Urdu, thereafter he joined Aligarh Muslim University as a lecturer in Urdu, he was appointed professor in 1986, and in 1996, he retired as chairman of the Urdu Department. He has co-edited the literary magazine Sher-o-Hikmat (Poetry and Philosophy). 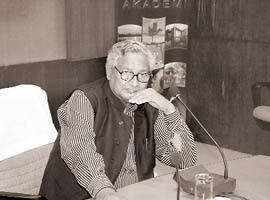 He was awarded the 1987 Sahitya Akademi Award in Urdu for his poetry collection, Khwab Ka Dar Band Hai (1987).
In 2008, He became the fourth Urdu writer to win the Jnanpith Award.

His first poetry collection Ism-e-azam was published in 1965, the second collection, Satvan dar (Satva yet in English), came in 1969, the third collection titled Hijr ke mausam was released in 1978, his most celebrated work, Khwab Ke dar band hain, came in 1987, and also won him the Sahitya Akademi Award in Urdu for the year. He has also published five collections of his poetry in Devanagari script.