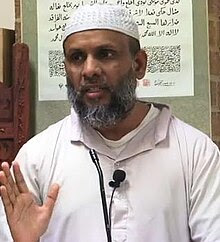 Mohammad Akram Nadwi (born c. 1964 ) is a scholar of Islam from the Indian city of Jaunpur. He is currently a research fellow at the Oxford Centre for Islamic Studies.

Nadwi studied Islamic sciences at Darul-uloom Nadwatul Ulama, an Islamic institution at Lucknow. These studies included shari'ah, Islamic law; hadith, the sayings of the prophet Muhammed; and fiqh, codified legal rulings. He became a muhaddith, someone who has an in-depth knowledge of the narrators of hadith, and later taught these subjects at that madrasah.
He has ijaza (licenses or certificates) from numerous scholars, including Shaykh Abul Hasan Ali Al-Nadwi, Shaykh Abdul-Fattah Abu Ghuddah and Shaykh Yusuf Al-Qaradawi. He has a doctorate in Arabic from Lucknow University. He lives in Oxford with his wife and 6 daughters.

He has written over 25 books, in Arabic, in the fields of hadith, fiqh, Islamic biography, and Arabic grammar and syntax. Most recently he has completed a 53-volume biographical dictionary of the muhaddithat, the female scholars of hadith. Expecting to find a handful, after eight years he had discovered more than 8000, from as long ago as Umm al-Darda, the wife of one of the companions of the Prophet .
Nadwi says he does not advocate unrestricted mixing between the sexes, but acknowledges that Muslim societies and families often limit the potential of their girls and women. He compares this limitation to the "live burial" (i.e. female infanticide) practised in pre-Islamic Arabia. He attributes to the "decline of every aspect of Islam" an insecurity and weakness which leads to these restrictions on girls' education and women's rights. He works as an alim (religious scholar), so he reaches a different audience, and has a different impact, than Muslim feminists such as Fatima Mernissi.

Al-Muhaddithat: The Women Scholars in Islam (Oxford: Interface Publications, 2007) A translation of the muqaddimah (preface) of his magnum opus above.
Abu Hanifah: His Life, Legal Method and Legacy (Leicester: Kube, 2010)
Al-Fiqh Al-Islami: According to the Hanafi Madhab: Purification, Prayers and Funerals v. 1 (London: Angelwing, 2007) An original compilation of the fiqh of Imam Abu Hanifah and his school. For the first time in English, the detailed rulings of this school are presented together with the evidence on which they are based; every argument is fully and carefully referenced. Nadwi takes current circumstances into consideration, making this book the first authentic, reliable and relevant account of Hanafi practice in English.
Madrasah Life (London: Turath, 2007) The translation (from Urdu) of his memoir of a student’s day at Nadwat al-Ulama.
The Garden of the Hadith Scholars (London: Turath, 2007) by Imam Abd Al-Aziz Ad-Dihlawi. Translated from Persian into Arabic and annotated by Mohammad Akram Nadwi. Translated into English by Aisha Bewley.