Rafeeque Mecca started his career in 1963 under the guidance of Late Haji Mecca Abdul Majid Sahib and took over full control of the business after his father’s demise in 1965. Under his guidance Farida has grown from a tannery to many shoemaking divisions. He was instrumental in diversifying the business by starting upper making factories in late 1960s and then established full shoe making factories in 1980s. He became chairman of the group in the year 1996. He is a distinguished figure in the industry and he has held various notable positions in the different industrial associations in the country.


Mr. M. Rafeeque Ahmed, the Chairman of the Farida Group and the recently elected Chairman of the Council for Leather Exports has been honoured with the prestigious Padma Shri award for the current year 2011. It is a befitting honour to him and the leather industry he represents by the government of India. He deserves it well and the leather fraternity in India particularly in Tamil Nadu is happy over this honour.

One feels that the Almighty Allah has paid good dividends to Mr. Rafeeque Ahmed for his principled approach, determination and efforts to achieve what he wants along with his friendly nature – a beautiful trait inherited from his ever smiling, cool and calm but at the same time strong willed father the late Mecca Abdul Majeed sahib.

Mr. Rafeeque Ahmed expanded his family business – the Farida group – founded in 1957 by his father to the present position. To put it in the words of the group, what started off as a small unit in Ambur, Farida today has expanded to 12 plants in the last five decades making them self-sufficient in sourcing of raw materials like finished leather and other shoe components and sub-assemblies from their own subsidiaries. They have a work force of about 7000 people in their units and almost double the number benefit through indirect employment from this group.

Mr. Rafeeque Ahmed has also been serving the cause of the leather industry by holding high posts in different trade associations. He is now the Chairman of the Council for Leather Exports, President of the All India Skin and Hide Tanners and Merchants Association, Chairman of the Ambur Economic Development Organization Ltd.(AEDOL), etc. He was instrumental in establishing the Aedol icon “Ambur Trade Centre” in Ambur at the cost of Rs.11.5 crore with the government assistance for the development of the leather and leather products industry. He also holds many other posts in some other organizations. He is the President of the TN state council of the Federation of Indian Chambers of Commerce and Industry (FICCI) He is also a Director of the Apollo Hospitals. He is also associated with different educational institutions and associations. He holds high posts in the Ambur Muslim Educational Society (AMES) and the Muslim Educational Association of Southern India (MEASI). He played an important part in the three day Centenary Celebrations of the AMES in June 2006  to which Dr. A.P.J. Abdul Kalam was invited when he was the President of India. No doubt he is an active gentleman well known in the national and international leather circles.
We congratulate him for receiving the prestigious national Padma Shri award and wish him all the best in all his future plans and programmes for the betterment of the industry, community and country. 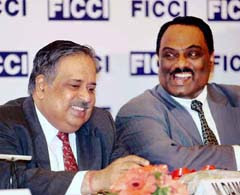 Farida Group is a family owned business that was founded in 1957 by late Haji Mecca Abdul Majid Sahib at Ambur for finished leather to be sold initially in the domestic market.

In 1960s, fulfilling Abdul Majid Sahib’s vision to move into overseas markets, we became the pioneers in import substitution starting with exports of finished leather and shoe uppers to USA, Germany and Italy.

In mid 1970s, Rafeeque Ahmed Mecca expanded the scope of product line from shoe uppers to complete shoe making. He started operations in Chennai (Madras) and also moved the group headquarters there.

What started off as a small unit in Ambur, Farida, today, has expanded to 12 plants in the last five decades making us self sufficient in sourcing of raw materials like finished leather and other shoe components and sub-assemblies from our very own subsidiaries.

The establishment of the subsidiary plants close to the shoe manufacturing units helps our companies to keep inventory at a minimum and follow the Just-in-Time supply method.

For the last forty years, we have primarily targeted the international market. Europe makes up close to 47% of our group sales with Asia Pacific and North Americas each accounting for close to 26-27%.

We currently employ 7,000 people directly and almost double the number of people benefit through indirect employment from Farida Group by providing components, sub-assemblies and services that are solely dependent on the volume of our shoe manufacturing units.