Iftikhar Ali Khan , sometimes I.A.K. Pataudi (16 March 1910—5 January 1952) was the 8th Nawab of Pataudi and captain of the Indian cricket team. He was one of few cricketers to have played for two countries, having also played for the English Test side. Iftikhar Ali Khan's son Mansoor also later served as captain of the Indian cricket team, a father-son feat without parallel in India. 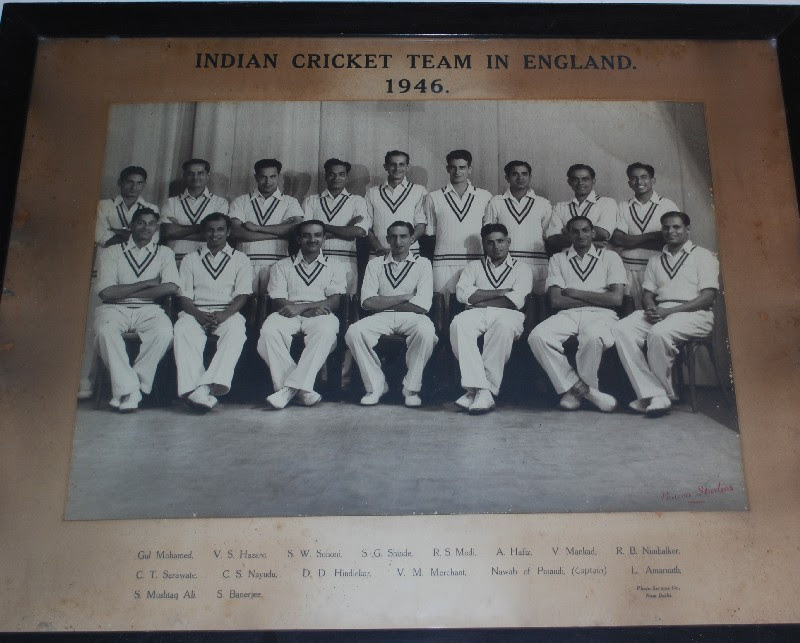 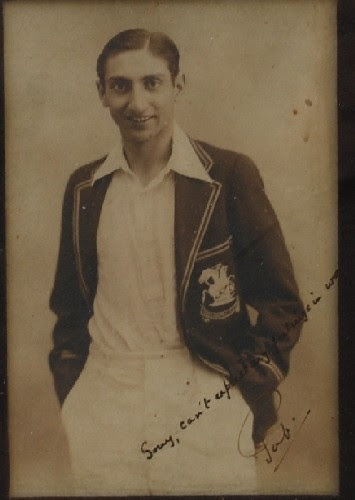 Iftikhar Ali Khan was born at Pataudi House in Delhi, into the family of the Nawabs of Pataudi, a small non-salute princely state located in the present-day Indian state of Haryana. He was the son of Nawab Muhammad Ibrahim Ali Khan of Pataudi and his wife Shahar Bano Begum, daughter of a Nawab of Loharu. Thus he was related to great Urdu poet Mirza Ghalib as well as later day Pakistan prime minister Liaqat Ali Khan.
Educated at Chiefs' College (later renamed Aitchison College), Lahore, and at Balliol College, Oxford, Iftikhar married Begum Sajida Sultan, second daughter of Hamidullah Khan, last ruling Nawab of Bhopal, in 1939. Hamidullah Khan was to have been succeeded in the titles and privileges associated with the ruling house of Bhopal by his eldest daughter Abida Sultan, She emigrated to Pakistan in the aftermath of the partition of India.His voluntary accession of his state to India by going to Delhi has been recounted in V P Menon 's book "The story of Integration of Indian States".V P Menon remembered him as "Great Patriot who unfortunately died young". Sajida therefore succeeded her father and was recognised by the government of India as Begum of Bhopal in 1961. Upon her demise in 1995, Mansoor, son of Iftikhar Ali Khan & Sajida Sultan, succeeded to the estates and titles associated with the Nawabs of Bhopal.
Apart from Mansoor Ali Khan, Iftikhar and Sajida were the parents of three daughters. Iftikhar died at Delhi of a heart-attack, while playing polo, on 5 January 1952, which incidentally was the 11th birthday of his son Mansoor Ali Khan, who succeeded him as Nawab of Pataudi, and who was also later to serve as captain of the Indian cricket team. He (Iftikhar Ali Khan) is also the grandfather of Bollywood actors Saif Ali Khan and Soha Ali Khan.

Iftikhar Ali Khan played for the English cricket team in the 1930s, before becoming captain of the Indian cricket team that toured England in 1946, making him the only Test cricketer to have played for both England and India. He played in six Tests in all.
Iftikhar went to Oxford in 1927. It was two years before he won a blue; this was for a 106 & 84 that saved a match against Cambridge. In 1931, he scored 1307 runs for Oxford and finished on top of the Oxford averages with 93. In the University match that year, A. Ratcliffe scored 201 for Cambridge, a new record. Pataudi declared that he would beat it, and hit 238* on the very next day. This stood as a record for a university match until 2005. Pataudi was qualified for Worcestershire in 1932 but played only three matches and scored just 65 runs in six innings. However, his slaughter of Tich Freeman with marvellous footwork during an innings of 165 for the Gentlemen at Lord's gained him a place on the Ashes tour for that winter.
Selected for the first Test of the 1932–33 Ashes series, Pataudi followed in the footsteps of Ranjitsinhji, by scoring a century (102) on his Test debut. He nonetheless incurred the ire of his captain Douglas Jardine by dissenting against Jardine's bodyline tactics. Upon Pataudi's refusal to take his place in a bodyline leg-side field, Jardine retorted, "I see His Highness is a conscientious objector." He was dropped after the second Test, and did not play again that series. Towards the end of the tour, Pataudi commented, "I am told he has his good points. In three months I have yet to see them."
1933 was Pataudi's only full season of county cricket, and he batted marvellously, again slaughtering Freeman at Worcester and scoring two other double-hundreds. He finished with 1749 runs at an average of 49, but after more brilliant batting early in 1934 his health broke down and he played just ten games. Pataudi did not play at all in 1935 and 1936 and only five times altogether in 1937 and 1938. Nonetheless, in these games he batted so well that Worcestershire, weak in batting, were always regretting he could not play more often.
He was appointed captain for the India tour of England in 1936, but withdrew at the last moment; it was another 10 years before he led India into the field. He played his next three Tests for India as captain in the India tour to England in 1946.
He was also a fine hockey and billiards player and an accomplished speaker. After the Indian independence, he was employed in the Indian Foreign Office till the time of his death. In 2007, in commemoration of the 75th anniversary of India's Test debut, the Marylebone Cricket Club has commissioned a trophy in Pataudi's name to be competed for between India and England.