Allauddin Khan (Urdu: علا الدین خان Bengali: ওস্তাদ আলাউদ্দীন খ়ান, also known as Baba Allauddin Khan) (ca. 1862 – 6 September 1972) was a Bengali sarodiya and multi-instrumentalist, composer and one of the most renowned music teachers of the 20th century in Indian classical music.
In 1935, he toured Europe, along with Uday Shankar's ballet troupe, and later also worked at his institute, 'Uday Shankar India Culture Centre' at Almora for a while. During his lifetime, he composed several ragas and laid the foundation of a modern Maihar gharana. Amongst his recording which are rare, the most important ones are those he recorded with the All India Radio in 1959-60.
He was the father of sarod maestro Ali Akbar Khan and Annapurna Devi, and the uncle of Raja Hossain Khan, as well as the guru of Ravi Shankar, Nikhil Banerjee, Vasant Rai, Pannalal Ghosh, Bahadur Khan, Sharan Rani and other influential musicians. He himself was a disciple of many great musicians, including Gopal Chandra Banerjee, Lobo, Munne Khan, and most importantly after a lot of struggle managed to become a shagird of the legendary Veena player, Wazir Khan of Rampur.
He was awarded the Padma Vibhushan, India's second highest civilian honour in 1971, and prior to that in 1954, the Sangeet Natak Akademi awarded him with its highest honour, the Sangeet Natak Akademi Fellowship for lifetime contribution to Indian music. 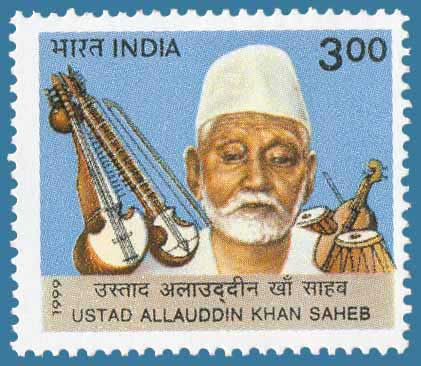 Allauddin Khan was born in Shibpur village in Brahmanbaria District (now in Bangladesh), the son of Sabdar Hossain Khan, also known as Sadhu Khan. Allauddin's elder brother, Fakir Aftabuddin, first taught him the basics of music at home.
At the age of ten, Allauddin ran away from home to join a jatra band, a traditional Bengali form of theater. This experience exposed him to the rich folk tradition of Bengal. After some time, he went to Kolkata, and was accepted as a student by singer Gopal Krishna Bhattacharya, alias Nulo Gopal. Allauddin committed to a 12-year practice program; However, Nulo Gopal died of plague after the seventh year. Khan then became a disciple of Amritalal Dutt, a close relative of Swami Vivekananda and music director at Kolkata's Star Theatre, with the goal of becoming an instrumentalist. At this time, he also took lessons in European classical violin from Lobo, a bandmaster from Goa. 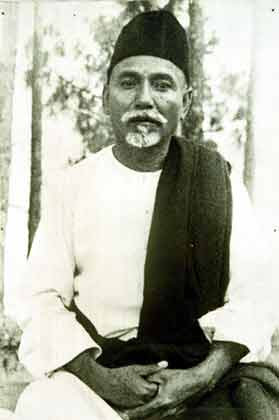 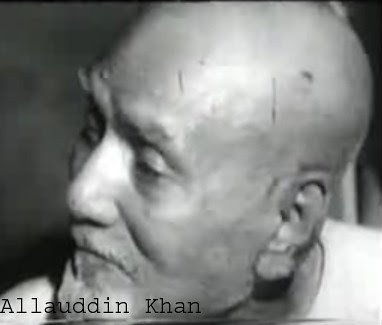 Khan got interested in sarod after a concert at Jagat Kishore Acharya's, zamindar of Muktagachha, where he listened to Ahmed Ali Khan, a student of Asghar Ali Khan (Amjad Ali Khan's granduncle). Alauddin became his student, and studied the sarod under him for five years. His next step was to go to Rampur for lessons from Wazir Khan Beenkar, court musician of the Nawab there, and one of the last direct descendants of the legendary Tansen. Through him, Alauddin was given access to the Senia gharana (Tansen school of music). He later became the court musician of Brijnath Singh Maharaja of Maihar Estate in Central Province.

During his time as a court musician, Khan completely reshaped the Maihar gharana of Indian classical music. The Maihar gharana was established in the 19th Century, but Khan's contribution was so fundamental that he is often thought to be its creator. This was a period of rapid change for Hindustani instrumental music, thanks not least to Khan, who infused the beenbaj and dhrupad ang, previously known from the been, surbahar (bass sitar) and sur-sringar (bass sarod), into the playing of many classical instruments.
For though he gave concerts on the sarod, Allauddin played many instruments, something that shaped his pedagogy. He put together an orchestra with Indian instruments, the String Band now known as Maihar Band, and while his son, Ali Akbar Khan, was taught the sarod, his daughter Annapurna Devi (Roshanara Khan) learned the surbahar, students such as Ravi Shankar and Nikhil Banerjee played the Sitar, Rabin Ghosh played on violin and Baijnath Singh and Pannalal Ghosh the bansuri bamboo flute. Baijnath Singh was first and Vasant Rai was Allauddin Khans last student. Of course Ravi and Ali Akbar Khan were to be very famous and spread this gharana over the world – something that Allauddin himself had started when, in 1935–1936, he went on an international tour with Uday Shankar's dance troupe.
Allauddin stayed at Maihar from 1918 to his death. In 1955, he established a Maihar College of Music. He was given the Sangeet Natak Academy Award in 1952, and the Padma Bhushan and Padma Vibhushan – India's third and second highest civilian decorations – in 1958 and 1971, respectively.

Anecdotes about Khan range from throwing a Tabla tuning hammer at the Maharaja himself to taking care of disabled beggars. (Nikhil Banerjee said that the tough image was "deliberately projected in order not to allow any liberty to the disciple. He always had the tension that soft treatment on his part would only spoil them".)
A few years before the turn of the century, he married Madanmanjari Devi (1888–?). He had one son and sarod heir, Ali Akbar Khan, and three daughters, Sharija, Jehanara and Annapurna who grew up as Roshanara Khan. Sharija died an early death suffering from diseases in her childhood and when Jahanara got married and a jealous mother-in-law burnt her Tanpura, a shocked Alauddin Khan decided not to train his only remaining daughter. One day, however, he came home to discover Annapurna teaching her brother Ali Akbar Khan, and her talent made the emotional father change his mind. Annapurna learned classical vocal music, Sitar, and Surbahar from her father. She later married and divorced Ravi Shankar.