Ustad Sabri Khan (Hindi: उस्ताद साबरी खान,(Urdu: استاد صابری خان), born 1927 in Moradabad, Uttar Pradesh) is an Indian sarangi player, who is descended on both sides of his family from a line of distinguished musicians.

Gharana and the music training

Khan belongs to the Sainia Gharana. This Gharana traces the tradition of its music back to Mian Tansen, the great vocalist in the court of Moghul Emperor Akbar. Khan was initiated into Sarangi – playing by his grandfather, Ustad Haji Mohammed Khan and later continued his training under his father Ustad Chajju Khan, both accomplished Sarangi exponents of their time. Khan also learned some important and rare techniques of playing this ancient and difficult instrument from his uncle Ustad Laddan Khan of Rampur.
Khan has a prodigious command over the Sarangi – bowed instrument, which is considered to be a difficult instrument to master in Indian instrumental music. In playing Sarangi he has generated his own style where the purity of raga, variety of tans, layakari, (rhythmic oscillations) alaap-jor are obvious and of course of the traditional form of sarangi-playing in its total originality.

Khan, has toured extensively across the world and performed in Afghanistan, Pakistan, China, Japan, USSR, Russia, USA, Canada, England, France, Germany, Holland, Belgium, Italy, Spain, Czechia, Slovakia, Bulgaria, Sweden, Norway, Finland and Mexico.. The credit of introducing the Sarangi to American and European audiences goes to Khan. He has also played a duet with the renowned Yehudi Menuhin and was invited as a visiting professor by the University of Washington, Seattle, USA.
In appreciation of his contribution to the Classical Music of India Ustad Sabri Khan has received numerous honours and awards, including the Sahitya Kala Parishad Award, UP Sangeet Natak Academy Award, National Sangeet Natak Academy Award and the prestigious Padma Shree Award (1992) and Padma Bhushan Award (2006) by the President of India – Government of India.
He has his seventh and eighth generation of the family playing Sarangi in the form of his son Kamal Sabri and grandson Sohail Khan. 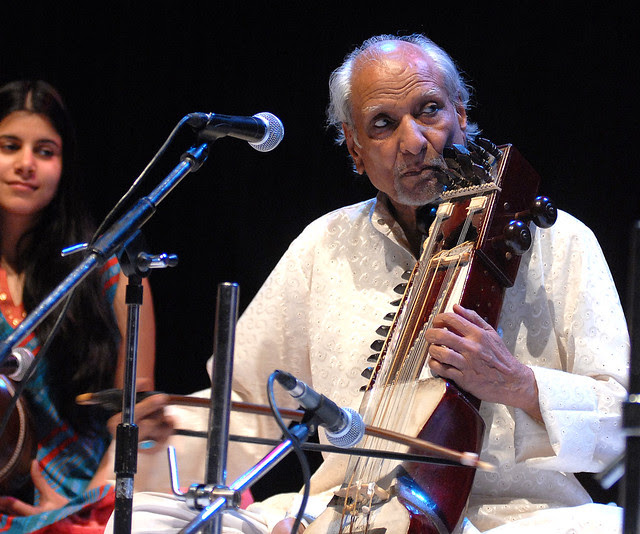 Khan received several national awards, including the Padma Shri in 1992 and the Padma Bhushan in 2006.