Maulana Kalbe Sadiq, a leading Shia Muslim scholar, is the Vice-President of the All-India Muslim Personal law Board (AIMPLB). He has a Ph.D. in Arabic from Lucknow University and runs a chain of schools and colleges in Uttar Pradesh. 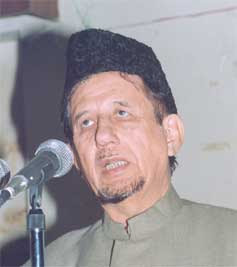 Maulana Dr. Syed Kalbe Sadiq: A reformer with a differenceMaulana Dr. Syed Kalbe Sadiq is an internationally renowned Islamic scholar, thinker, reformer, educationist and man of principles. He belongs to a reputed religious family of the subcontinent “Khandan-e-Ijtihad”. He was born in 1939 in the culturally rich city of Lucknow. His father late Maulana Kalbe Husain was a prominent Islamic scholar and an excellent orator and his brother late Maulana Kalbe Abid was also a reputed Islamic scholar and pious Alim.
Maulana Dr. Kalbe Sadiq received his early education from the famous madrasa of Sultan ul Madaris. He then moved to Aligarh Muslim University, Aligarh and obtained the degree of Ph.D. in Arabic Literature.
Beside Arabic, Dr. Kalbe Sadiq has mastery over Urdu, Persian, English and Hindi languages. He is an orator par excellence and has traveled across the globe to deliver speeches and lectures on Islamic theology. Among his admirers are the followers of all religions. Although he belongs to the Shia sect of Islam but is equally respected among all Islamic sects and holds the post of Vice-President of India’s biggest socio-religious organization All India Muslim Personal Law Board.
Today, Maulana Dr. Kalbe Sadiq is seen as a big exponent of communal harmony between Hindu and Muslims and also Shias and Sunnis. Peaceful coexistence has been one of his basic principles of life. Earlier Lucknow was known for the sectarian violence between Shias and Sunnis particularly in the days of Muharram. But with the initiative and consistent efforts of Dr. Sadiq, several confidence building measures have been taken up between the two communities and by the grace of God condition is changing rapidly.
When Maulana Dr. Kalbe Sadiq stepped into the religious and social leadership of Muslim masses in mid 70s, he was moved by the pathetic condition of the community. The Muslim community was backward in all fields and deeply sunk into the darkness of illiteracy, poverty and ignorance. He, after much deliberation, concluded that the root cause of the backwardness of Muslims lies in its distance from education and knowledge.
From thereafter Dr. Kalbe Sadiq resolved to spread education and knowledge on modern lines and waged a community wide war against illiteracy and ignorance. This became the aim of his life. He started an educational movement in the community and left no stone unturned to remove the darkness of ignorance.
On 18th April 1984, he established Tauheedul Muslimeen Trust (T.M.T) to give educational assistance and scholarships to needy and poor students. Within the period of 27 years the Trust now is running many schools, colleges, technical institutes, charitable hospitals, free education programmes and providing scholarships to around 5000 students all over India. The amount of scholarship varies from thousands to lacs of rupees. The thousands of the beneficiaries of T.M.T’s scholarships, over the period of these years, are now leading a successful life and bringing name and fame to their family and off course the community all over the world.
Maulana Dr. Kalbe Sadiq is especially attached to a project “T.M.T’s free education programme” which provides quality education, transportation, uniforms, stationery, books, etc. absolutely free to the most deserving and underprivileged students of our society. Under this programme, around 4000 students are receiving quality education in various cities of India like Lucknow, Allahabad, Jaunpur, Aligarh, Moradabad, Jalalpur, Barabanki, etc.
In the same programme, Dr. Kalbe Sadiq has established a completely free education school in Lucknow known as “Unity Mission School”, where 1800 students are studying and all their expenses including books, copies and uniforms are borne by TMT. The result is for everyone to see. The students from this programme are changing the mindset of their parents and thus bringing about a big difference in the overall condition of our society.
It can be safely said that after Sir Syed Ahmad Khan, no Muslim leader has made as much efforts to spread modern education and scientific temperament in Muslim society as Dr. Kalbe Sadiq did. It is for the same reason that people are now rightly calling him to be a ‘second Sir Syed’.
The educational, charitable and constructive projects running under his able guidance and supervision include:
(1) Tauheedul Muslimeen Trust, Lucknow
(2) Unity College, Lucknow
(3) Unity Mission School, Lucknow
(4) Unity Technical School, Lucknow
(5) Unity Public School, Allahabad
(6) M.U. College, Aligarh
(7) Unity Computer Centre, Lucknow
(8) Unity Free Education Programme in Lucknow, Jaunpur, Jalalpur, Allahabad, Barabanki, Moradabad and Aligarh etc.
(9) Hiza Charitable Hospital, Lucknow
(10) T.M.T Medical Centre, Shikarpur, U.P.
(11) T.M.T’s Widow’s Pension Scheme
(12) T.M.T’s Orphan’s Educational Sponsorship Scheme
(13) Reconstruction and Expansion of the World Famous Imam Bargah of Ghufran Maab, Lucknow
(14) Reconstruction and Renovation of the Tomb of World Famous Elegy Writer and Marsia Khwan Hazrat Meer Anees, Lucknow
He is also the President of Lucknow’s famous Era’s Medical College & Hospital. This medical college is known for its excellent medical facilities at very nominal rates.


His views about Islam :
Maulana Dr. Syed Kalbe Sadiq views Islam to be a complete and final version of the same truth which revealed in different partial versions in earlier times. It is a comprehensive and practical way of life encompassing all aspects of human life be it spiritual, social or ethical. Dr. Sadiq also holds that Islam is a religion of rationality and reason and therefore leaves no scope for blind ritualism. He has been one of the bitterest opponents of the ritualistic version of Islam and has warned the masses on countless occasions not to perform acts and rituals without understanding its significance because this will result in false feeling of religious arrogance and superiority complex. He has always emphasized that religion is a means to reform and beautify human character. If the character of a Muslim is not attractive he should not be called a true Muslim. Likewise he has also made it clear in many speeches that Islam is the religion of knowledge and thus it encourages research and debate. The realities and doctrines of Islam are open for every human being to testify first and then accept.
Maulana Dr. Kalbe Sadiq also portrayed Islam many times to be a religion of ease. Islam, according to him, has come to make human life easy, not difficult. It does not create problems rather it solves them. If a person tries to serve God and humanity and pray with purity, his little worship will be more valuable in the sight of Allah than hard spiritual exercises of other people. And lastly, Dr. Sadiq also termed Islam, on several times, to be the religion of justice. The goal of religion is to end all kinds of injustice, oppression and tyranny from the face of the earth. According to him, the real and ideal Islamic society is a society where no person may be discriminated on racial, linguistic or economic grounds. In this context, he also condemns the injustice against women. The fact is that this half population of human civilization has always been a victim of worst kind of injustice and exploitation. Dr. Kalbe Sadiq has always raised his voice in support of the rights of women and has taken concrete steps to safeguard them. He has paid special attention towards the education of girls which he deems to be the best way to empower them.
Maulana Dr. Kalbe Sadiq is also known for his radical opposition of those so called Mullas whom he often calls “Kathmullas”, whose activities are confined in creating hatred, disputes, differences and confusions. These so called religious leaders, according to him, are giving to the community the slow poison of blind ritualism and stagnation and ultimately leading the community backwards. They have never come forward to fight against social evils like poverty, ignorance, superstitions, extravagances, costly marriages, dowry and unjustified divorces etc. They, according to him, are serving none but themselves and also are scared to loose their power, influence, authority and above all, livelihood in case of the awakening and resurgence of the community.
Besides, like all great personalities Dr. Sadiq is known for his simplicity, politeness, morals and above all his punctuality. His all programmes including functions, speeches and lectures always began on accurate scheduled time.
It is because of these enlightening and liberal views regarding religion and society, Dr. Kalbe Sadiq has always been the target of criticism and objections from some extremists and ritualistic groups of the community but he never replies in words, he replies with action and results 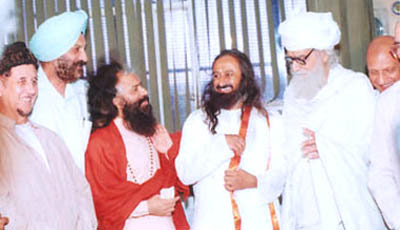