Akhtar Ali (Hindi: अख़तर अली, Urdu: اختر علی), born 5 July 1939, is a former tennis player of India. He was the member of the Indian team that reached the final of Davis Cup in 1967. He was a member of the Indian Davis Cup team continuously from 1958 to 1964. Helping win the Eastern region in 1961 Davis Cup. Former Captain of Indian Davis cup in 2008.
Later he turned to coaching and coached the players like Ramesh Krishnan, Vijay Amritraj, Anand Amritraj and Leander Paes. He is father of Zeeshan Ali, a former Indian national tennis champion.
Post career
Former Davis Cup coach Akhtar Ali will start a junior development programme at the South Club from Friday. The trainees will be divided into three categories — under-14, under-16 and under-18. Free coaching will be provided to the state’s best players. 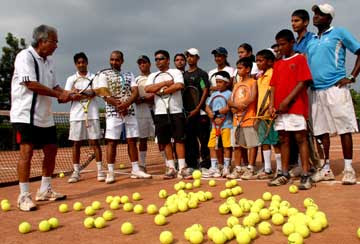 Winner of the Arjuna Awardees in Lawn Tennis in 2000.