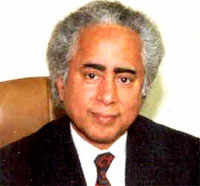 Anwarul Hoda, IAS (Rtd.)
Member, Planning Commission, Government of India.
Date of Birth : 18.11.1938
Mr. Anwarul Hoda, former civil servant, joined the Indian Administrative Service in 1962. During the period 1963-1974 he worked in the state of Bihar. Among the assignments held by him in the state were District Magistrate, Muzaffarpur (1972-74), Managing Director Bihar State Financial Corporation (1970-72) and Deputy Secretary, Public Works Department (1967-70).

During the period 1974-81 and again 1985-93, he worked in the Government of India in the Ministry of Commerce and the last post held by him was Special Secretary in the Ministry. Throughout this period his main responsibility was multilateral trade negotiations under the auspices of the General Agreement on Tariffs and Trade. He was the Chief Policy Coordinator in the Government of India during the Uruguay Round (1986-93).

In 1993 he was appointed as Deputy Director General ICITO/GATT and in 1995 he assumed charge as Deputy Director General, World Trade Organisation. On completion of his tenure in 1999 he was appointed Special Adviser to the Director General of WTO for the Ministerial Conference at Seattle. Before joining the Planning Commission he was Professor in the Indian Council for Research on International Economic Relations (ICRIER), New Delhi.
Selected Publications:
1. Developing Countries in the International Trading System (Allied, 1987)
2. Tariff Negotiations and Renegotiations under the GATT and the WTO (Cambridge University Press, 2001)
3. WTO Agreement & Indian Agriculture (Social Science Press, 2002)
4. WTO, Agriculture Negotiations and Developing Countries: Lessons from the Indian Experience (forthcoming)