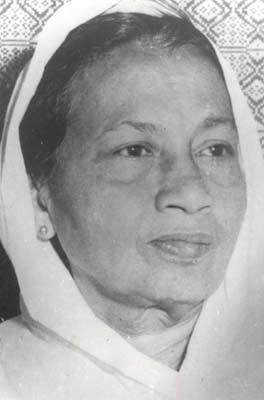 Smt. A Nafeesath Beevi, Lawyer and Senior Congress leader, was born in March 1924 as the daughter of Shri. Abdul Karim and Smt. Hawa Umma. She had her education at Pope Pius XI High School at Bharanikkavu, Women’s College, Trivandrum, S.D. College, Alleppey and Law College, Ernakulam. A person with a brilliant academic career, she enrolled as an advocate in 1953.

Smt. Nafeesath Beevi’s political activities began in 1954. She later actively participated in the ‘Vimochana Samaram’ and had to undergo imprisonment, on account of this. She has been taking active interest in the organisational work of the Congress and has been in the forefront in organising Women’s Associations and Co-operative Societies. She continues to be a Member of All India Congress Committee and Kerala Pradesh Congress Committee since 1956. Smt. Nafeesath Beevi was elected to the Second Kerala Legislative Assembly in 1960 from Alleppey Constituency. She was elected to the Office of Deputy Speaker on 15 March 1960 and continued to hold the post till 10 September 1964.


She had also served as a Member in the Kerala State Women’s Commission.


Married to Shri. Abdulla Kutty, they have one son and three daughters.

Honoured: A. Nafeesath Beevi, 77, the former Deputy Speaker of Kerala Assembly has been conferred with the ‘Sahrudaya Vedi’ Award instituted by Thrissur based apex body of social organizations. The award was presented in a function by health minister P. Sankaran at Thrussur. Mrs. Beevi started her career as an advocate and entered politics 50 years ago and held various positions in the Indian National Congress. Se is currently a senior member of the Women’s Commission in Government of Kerala.