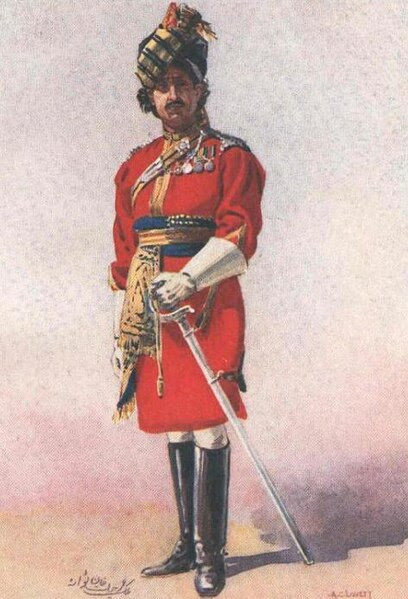 Major General Nawab Sir Malik Mohammed Umar Hayat Khan GBE KCIE MVO (1875–1944), was a soldier of the Indian Empire, one of the largest landholders in the Punjab, and an elected member of the Council of State of India. He was also called Sir Malik Umar Hayat Khan Tiwana.

The son of Sir Malik Sahib Khan KB CSI, Khan belonged to a Rajput family which had been prominent among the landed aristocracy of the Punjab since the 15th century, and was educated at Aitchison Chiefs College, Lahore. 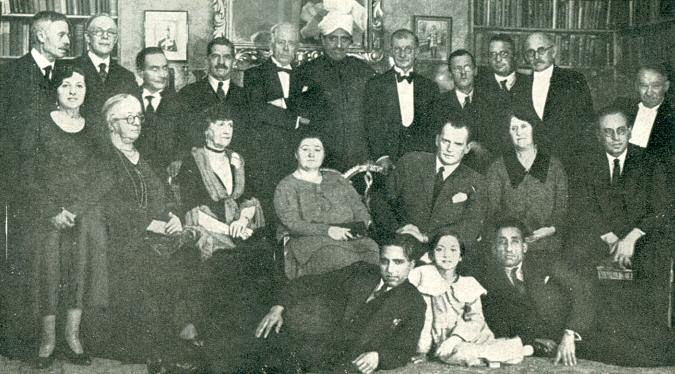 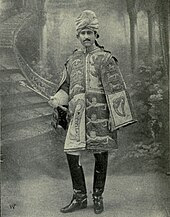 Khan photographed in 1911 as the Assistant Delhi Herald
In 1907, moving beyond his career as a soldier, the management of his family estates in the Punjab, and his role as an hereditary Provincial Darbari, Khan became an Attaché to HM the Amir of Afghanistan. He served as a member of the Governor-General of India's Imperial Council from 1910 to 1944.
In 1910, in the Imperial legislature, Khan called for Europeans to supervise districts as "...disinterested men to safeguard the interests of all".
In December 1913, he was elected as one of the seventeen officers of the All India Muslim League, at the League's Seventh Session held at Agra.
He was a member of the Council of the Secretary of State for India from 1924 to 1934, as well as becoming an elected member of the Council of State and a member of the Punjab Legislative Council for two terms.
In a deposition for a case in the High Court in 1924, Khan was described as "Colonel Sir Malik Umar Hayat Khan Tiwana KCIE, CEI, MVO, Zamindar of forty-eight thousand bighas at Shapur, Rawalpindi, Honorary Magistrate 1st Class".
From 1929 to 1934, he spent most of his time in London, joining the conservative Carlton Club and becoming President of the British Falconers' Club.

In 1924, Khan appeared as a significant witness in the O’Dwyer - v - Nair libel case, heard in the High Court in London over five weeks from 30 April 1924.
Sir Michael O’Dwyer, Lieutenant-Governor of the Punjab until 1919, sued Sir Chettur Sankaran Nair in a case concerning matters arising from the Amritsar Massacre and the Punjab Disturbances of 1919, and in particular recruiting abuses in the Punjab between 1917 and 1918. The case turned into one of the longest civil hearings in English legal history up to that time.
Khan, appearing as a witness for O'Dwyer, stated that there had been a recruiting quota, namely one third of all villagers of military age. He described the killing of Tahsildar Sayyad Nadir Hussain in Lakk by villagers who strongly objected to his approach to recruiting, and an attack by one thousand rioters on police seeking to enforce recruitment warrants, resulting in the killing of some of the rioters. Under cross examination, he admitted that there had been a 'white book' and a 'black book', in which village headmen who met recruitment targets and those who did not were listed.
O'Dwyer won his case, with the sole dissenting member of the jury being the political philosopher Harold Laski.

Khan married and had one son, Sir Malik Khizar Hayat Tiwana KCSI, OBE (1900–1975), who served as Chief Minister of the Punjab from 1942 until 1947.
He performed the Haj pilgrimage in 1935.
Khan gave his recreations in Who's Who as "motoring, polo, pig-sticking, riding, shooting, athletics, hawking, coursing".
Among his manservants was Mir Sultan Khan whose chess ability was recognized by Umar Khan. Therefore, he took Sultan Khan with him to England. During Umar Khan's stay in Europe, Sultan Khan became indeed one of the world's strongest chess players.