Hussain was a child prodigy, and was touring by the age of twelve. He went to the United States in 1970, beginning his international career which includes more than 150 concert dates a year. In 1973, he appeared on George Harrison's Living in the Material World album. A prolific composer, he has received widespread recognition.
Hussain is a founding member of Bill Laswell's 'World Music Supergroup' Tabla Beat Science. 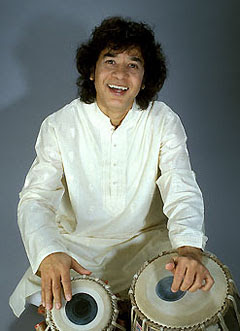 Hussain participates in the Silk Road collaborative musical project.  He teaches Tabla to advanced students in both San Francisco and Mumbai. Zakir participates in the Global Drum Project with percussionists from around the world.
In 1992, Hussain founded Moment! Records, which features original collaborations in the field of contemporary world music, as well as live concert performances by great masters of the classical music of India. The label presents his own world percussion ensemble, The Rhythm Experience, both North and South Indian classical recordings, Best of Shakti and the Masters of Percussion series. Moment Records’ 2006 release Golden Strings of the Sarode, with Aashish Khan and Zakir Hussain, was nominated for a Grammy Award for Best Traditional World Music Album category for that year.

Hussain worked with John McLaughlin on several Indo-Jazz projects, beginning with their collaboration in the band Shakti (band) on the albums Shakti (album) (1975 Columbia), A Handful of Beauty (1976 Columbia),and Natural Elements (1977 CBS). McLaughlin later appeared on Zakir's album Making Music. Twenty years later, they rejoined in the band Remember Shakti, recording the albums Remember Shakti (1999 Universal Records), The Believer (2000 Universal Records), Saturday Night in Bombay (2001 Universal Records), Live at 38th Montreux Jazz Festival (18 July 2004), and Live at Miles Davis Hall (8 July 2004). They also appeared in the DVD The Way of Beauty. Both bands performed live both in the U.S. and abroad as recently as 2008.

Hussain has collaborated with Mickey Hart on many projects, beginning with Hart's first solo album Rolling Thunder, and including Diga, At The Edge, Planet Drum, Mickey Hart's Mystery Box, Supralingua, Spirit into Sound, and Global Drum Project. He has been part of several of his bands including the Diga Rhythm Band, Planet Drum, Bembe' Orishas, and the Global Drum Project. These projects have brought him together with such masters of world percussion and music as Sikiru Adepoju, Airto Moreira, Flora Purim, Babatunde Olatunji, and Giovanni Hidalgo.
The first Planet Drum album, released in 1991 on the Rykodisc label, went on to earn the 1992 Grammy Award for Best World Music Album, the first Grammy ever awarded in this category. The Global Drum Project album and tour brought Mickey Hart, Zakir Hussain, Sikiru Adepoju, and Giovanni Hidalgo together again in a reunion sparked by the 15th anniversary of the ground-breaking album Planet Drum. The album Global Drum Project has won the Grammy Award for Best Contemporary World Music Album at the 51st Grammy Awards Ceremony held on 8 February 2009. 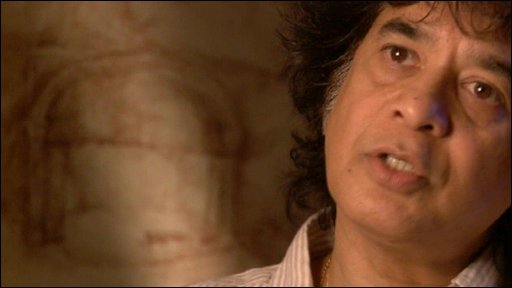 When Bela Fleck and Edgar Meyer were asked to compose a triple concerto by the Nashville Symphony, they both named Hussain as their first choice for the third member. The piece, titled The Melody of Rhythm; Concerto premiered on September 9, 2006 with Leonard Slatkin conducting the Nashville Symphony. The trio composed several more songs together, and included both the concerto and additional works on a CD released in 2009 entitled The Melody of Rhythm - Triple Concerto & Music for Trio (2009 E1 Music). On the recording, the orchestral parts are performed by the Detroit Symphony Orchestra, with Leonard Slatkin once again holding the baton. The liner notes indicate the trio has more projects in mind for the future.

Hussain starred in the Merchant Ivory Film Heat and Dust in 1983, for which he also composed the score. He composed, performed and acted as Indian music advisor for the Malayalam film Vanaprastham, a 1999 Cannes Film Festival entry which was nominated for the Grand Jury Prize at the AFI Los Angeles International Film Festival (AFI Fest) in 1999, and won awards at 2000 Istanbul International Film Festival (Turkey), 2000 Bombay International Film Festival (India), and 2000 National Film Awards (India). He has composed soundtracks for several movies, most notably In Custody and The Mystic Masseur by Ismail Merchant, and has played tabla on the soundtracks of Francis Coppola's Apocalypse Now, Bernardo Bertolucci's Little Buddha, and other films. He also composed the soundtrack of the Aparna Sen's Mr. and Mrs. Iyer, being himself the singer of some of the songs, for the first time in cinema.
He starred in several films specifically showcasing his musical performance both solo and with different bands, including the 1998 documentary "Zakir and His Friends", and the documentary "The Speaking Hand: Zakir Hussain and the Art of the Indian Drum" (2003 Sumantra Ghosal). He also performs in the DVDs The Rhythm Devils Concert Experience (2008), and The Way of Beauty (2006) with the band Remember Shakti.

Zakir Hussain married Antonia Minnecola, a Kathak dancer and teacher, who is also his manager.
Zakir Hussain has two daughters Anisa Qureshi and Isabella Qureshi. Anisa Qureshi graduated from UCLA and is trying her hand in video production and film making. The other daughter, Isabella is studying as a dance major in Manhattan.
He was named an Old Dominion Fellow by the Humanities Council at Princeton University, where he resided for the 2005–2006 semester as full professor in the music department. He was also a visiting professor at Stanford University. 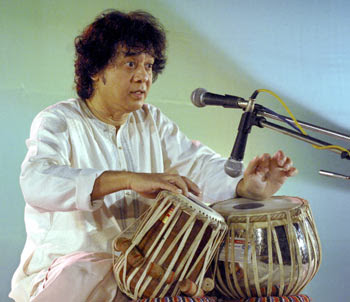 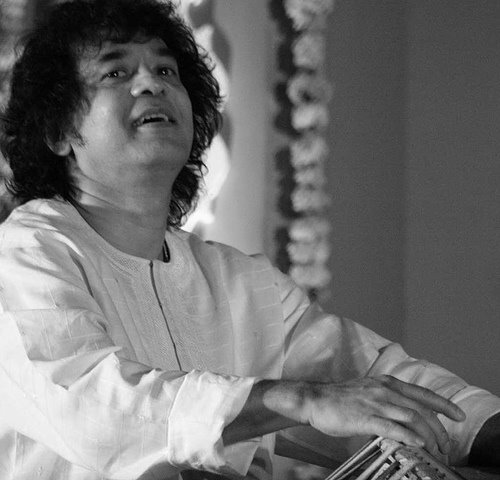