A. M. Ahmadi (Aziz Mushabber Ahmadi) is a former Chief Justice of India. After serving as a judge in the Gujarat High Court, Ahmadi was appointed judge to the Supreme Court in 1988. He was then elevated to the post of Chief Justice, and served from 1994-1997. Today, he serves as Chancellor at the Aligarh Muslim University. 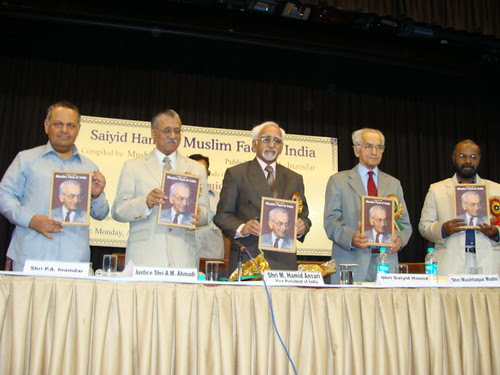 Having received Bachelor of Laws (LL.B.), Ahmadi joined the Bar in 1954. He eventually was appointed judge to the City Civil & Sessions Court of Ahmedabad in 1964. During this time, Ahmadi was appointed as Secretary of the Legal Affairs of the State of Gujarat in 1974, which soon led to an appointment as Judge of the Gujarat High Court in 1976.
As Judge of the Gujarat High Court, Ahmadi worked as Chairman of various advisory boards for: Also, he worked as a Member of the Ravi & Beas Waters Disputes Tribunal under the Rajiv-Longowal Settlement (Punjab Settlement).
Ultimately this led to an appointment as a Justice in the Supreme Court of India in December 1988. After six years, Ahmadi was appointed as Chief Justice of India in October 1994. Ahmadi became the third Muslim ever to serve as Chief Justice of India. After serving for two and a half years, he eventually stepped down to retire in March 1997.
Ahmadi as Chief Justice of India on September 13, 1996 in a ruling had diluted charges of Culpable Homicide against the officials of Union Carbide India Limited, the company responsible for the infamous Bhopal Gas Tragedy of December 1984, also known as the world's worst man made industrial disaster that killed over 20,000 people and maimed millions. In the charge sheet filed in the Bhopal gas tragedy case, India's Central Bureau of Investigation had pressed charges under Section 304 (II) which attracts maximum punishment of 10 years. However, when the accused filed a special leave petition in the Supreme Court, the bench headed by Ahmadi ruled in their favour in 1996 directing the probe agency to file charges under Section 304 (A) which attracts a maximum punishment of two years. This judgment has become a blot on his reputation and has attracted widespread condemnation globally by human, civil rights and environmental activists as also legal & constitutional experts in the wake of the judgment passed by a lower court of Bhopal on June 7, 2010 handing prison term for just two years & measly penalties to some officials of Union Carbide company.
His integrity is also being questioned in wake of disclosures that post his retirement from the Supreme Court of India, Ahmadi took up the position of Lifetime Chairman of the Bhopal Hospital Trust, set up by Union Carbide India Limited, the same company responsible for the disaster and which benefited from dilution of charges by Justice A.M. Ahmadi.

Among many recognitions include:

After stepping down from the supreme court, Ahmadi became Chancellor at the renowned Aligarh Muslim University. In 2007, Ahmadi was re-elected Chancellor of Aligarh for three years.
Since entering academics, he has been invited to speak at various universities and forums worldwide. Particularly in India, he has used his status to speak out on political issues such as minority rights.

Using his status, Ahmadi also continues to speak out for Muslim Rights in India, himself being a Dawoodi Bohra Muslim. Today he remains active in Indian politics as an advocate of minority rights, most recently through a book entitled A Guide To Uplift Minorities by the city-based Human Welfare Trust.
Putting emphasis on education, Ahmadi has frequently mentioned that the vast Muslim population of India is struggling to put children in school. He encourages federal and state governments to solve this problem, stating that, "the country simply cannot afford to have a certain percentage of population unable to contribute to the country's development.".