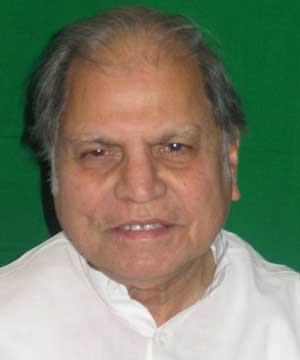 
Abdul Rehman Antulay was born in kankidi, Maharashtra (born February 9, 1929) was a union minister (Minority Affairs) and an MP in the 14th Lok Sabha of India. Earlier he had been the Chief Minister of the state of Maharashtra, but was forced to resign after being convicted by the Bombay High Court on charges that he had extorted money for a trust fund he managed.
He belongs to the Congress Member of Parliament (MP). In the Indian general elections, 2009, he lost to Anant Geete from the Raigad (Lok Sabha constituenc) of Maharashtra 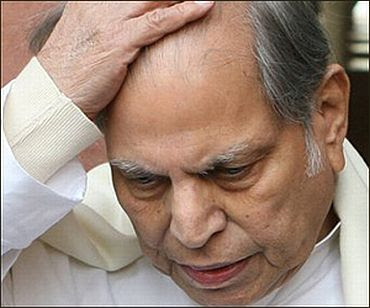 
He was born to father Shri Hafiz Abdul Gafoor and mother Zohrabi in the village Ambet District, Raigad, Maharashtra, India. He is married to Nargis Antulay and the couple have one son and three daughters. After appearing for B.A examination, he studied Barrister-At -Law, Educated at Bombay University and Lincoln's Inn, London. Former Maharashtra chief minister A R Antulay (left) shares a light moment with his wife Nargis Antulay at their residence in Bombay on June 15, 1982. Maharashtra Chief Minister A R Antulay with his wife Nargis Antulay being taken into a procession in Bombay after his resounding victory at polls on November 1, 1980. Maharashtra Chief minister A R Antulay (left) handing over a letter to leader of Missionaries of Charity, Mother Teresa on the eve of the new year's day indicating grant of land for the Mother's service project at Nagpur, at his residence Varsha in Bombay on December 31,1980. Also seen Chief Minister's wife Nargis Antulay in the centre.

He started his career as active social worker in 1945. As a social worker his notable achievements include construction of (i) a jetty on the bank of Savitri river, Bankot (Khadi) Creek through `Shramdan`. He also worked with own hands along with the villagers of Ambet; (ii) road between the village Ambet and Lonere Goregaon (then in Kolaba, now in Raigad district) to connect his village to NH-17. He had a keen interest in the Social causes like service of the weaker section of the society and up liftment of the unfortunates. On media's report of his involvement in corruption, he had to resign from the post of Chief Minister of Maharashtra. He was Union Minister for Ministry of Minority Affairs (India) under Manmohan Singh's government.

He served as the chief minister of the state of Maharashtra. He represents the Kolaba constituency of the state of Maharashtra as the Indian National Congress Member of Parliament. He was the member of 14th Lok Sabha and served as the Union Minister of Minority Affairs.
Between 1977 and 1980, Abdul Rahaman Antulay delivered whole-hearted assistance to Indira Gandhi during her subjugation and pursuance. He continued to be unwaveringly loyal and supportive to her. He initiated (i) Sanjay Gandhi Niradhar Yojana for the poor and downtrodden and (ii) Sanjay Gandhi Swawlamban Yojana during his Chief Minister ship in 1980-82. In order to institute these Yojonas he paid out of the State treasury loans to the poor and borderline farmers to the tune of 59 crore rupees. Also built (Shaheed) Hutatma Smarak in every village where one or more persons laid down their life for the cause of freedom. Under this project over 250 such villages in the State of Maharashtra have a (Shaheed) Hutatma Samarak. This has been a unique initiative till date. Maharashtra Chief minister A R Antulay (centre) offering Eid prayers on the occasion of Eid-ul-Fitr at Anjuman-Islam School in Bombay on August 13, 1980. A R Antulay (left) sworn in as Chief Minister of Maharashtra by the state Governor Sadiq Ali (right) at Raj Bhavan in Bombay on June 9, 1980. Ashes Immersion: Chief Minister of Maharashtra A R Antulay immersing the ashes of late Sanjay Gandhi, at Chowpatty in Bombay on June 28, 1980. He has also published several books: He resigned as Chief Minister of Maharashtra after the Bombay High Court convicted him of extortion on January 13, 1982. The court ruled that Antulay had illegally required Bombay area builders to make donations to Indira Gandhi Pristhan trust, one of several trust funds he had established and controlled, in exchange for receiving more cement than the quota allotted to them by the Government.
Again after November 2008 Mumbai attacks he has raised a controversy by saying that the end of Hemant Karkare, of the Anti-Terrorism Squad of Maharashtra, killed in the attacks, may be related to his investigation of the 2006 Malegaon blasts, leading to questions about the Mumbai attacks. Later he changed his stand and told Parliament he had not talked about who killed the police officers but about who "sent them in the wrong direction". His party, Congress, distanced itself from his statements, however, the US embassy cables indicate that this early dismissal was then followed by tacit promotion, indicating "the Congress Party will readily stoop to the old caste/religious-based politics if it feels it is in its interest.