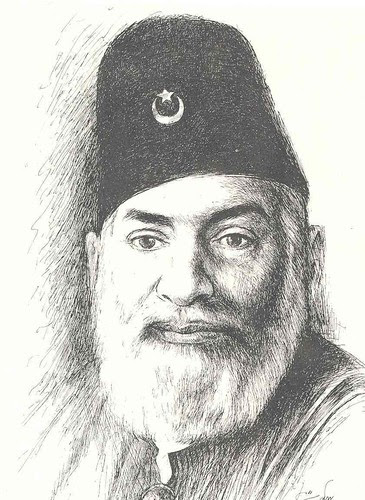 Maulana Shaukat Ali was an Indian Muslim nationalist and leader of the Khilafat movement. He was the brother of Maulana Mohammad Ali.


Early life
Shaukat Ali was born in 1873 - in Rampur state in what is today Uttar Pradesh or known as Lucknow. He was of Azeri Turkish descent, Turks that settled in modern day Iran, Afghanistan, and Northern India. He was educated at the Aligarh Muslim University. He was extremely fond of playing cricket, captaining the university team.
Ali served in the civil service of United Provinces of Oudh and Agra from 1896 to 1913.

Shaukat Ali helped his brother Mohammed Ali publish the Urdu weekly Hamdard and the English weekly Comrade. In 1919, while jailed for publishing what the British charged as seditious materials and organizing protests, he was elected as the first president of the Khilafat conference. He was re-arrested and imprisoned from 1921 to 1923 for his support to Mahatma Gandhi and the Indian National Congress during the Non-Cooperation Movement (1919-1922). His fans accorded him and his brother the title of Maulana. In March 1922, he was in Rajkot jail

Along with his brother, Shaukat Ali grew disilliusioned with the Congress and Gandhi's leadership. He opposed the 1928 Nehru Report, demanding separate electorates for Muslims, and attended the first and second Round Table Conferences in London. His brother died in 1931, and Ali continued on and organized the World Muslim Conference in Jerusalem.
In 1936, Ali joined the All India Muslim League and became a close political ally of and campaigner for Muhammad Ali Jinnah, the future founder of Pakistan. He served as member of the Central Assembly from 1934 to 1938. He travelled over the Middle East, building support for India's Muslims and the struggle for independence.
Shaukat Ali died in 1938.