Kunhali Marakkar I or Mohammed Kunjali Marakkar (also known as Kunhali Marakkar) was a Kunhali Marakkar (Muslim naval chief) of the Samoothiri Raja, a Hindu king of Kozhikode (anglicized Calicut), in present day state of Kerala, India during the 16th century. He was the first of the four Kunjalis who played a part in the Raja's naval wars with the Portuguese, who arrived in India in 1498. The Marakkars are credited with organizing the first naval defence of the Indian coast, to be later succeeded in the 18th century by the Maratha Sarkhel Kanhoji Angre.

The title of Marakkar was given by the Raja. It may have been derived from the Malayalam word marakkalam meaning ‘boat,’ and kar, a termination, showing possession.
The four key Marakkars:

According to tradition, Marakkars were originally marine merchants of Kochi who left for Ponnani in the Samoothiri Raja's dominion when the Portuguese came to Kochi. They offered their men, ships and wealth in the defence of their motherland to the Samoothiri of Kozhikode-The Raja took them into his service and eventually they became the Admirals of his fleet. 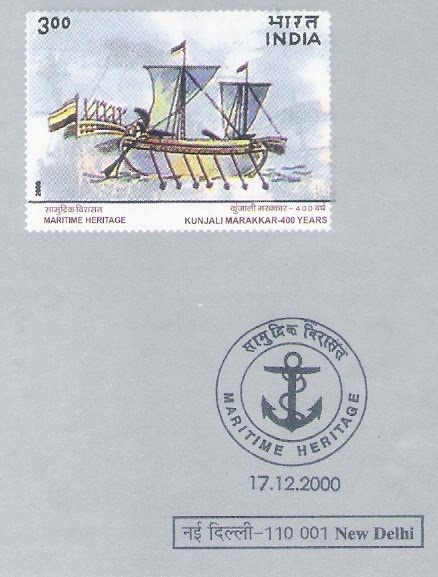 Another version suggests that they were merchants of Cairo who settled in Kozhikode and joined the Samoothiri's navy. Of the four Marakkars, Kunjali Marakkar II is the most famous.

The Portuguese initially attempted to obtain trading privileges in 1498, but soon had troubles because the pressure from the Arabs over the Raja, since they had traditionally been trading in his ports, and did not want to lose the monopoly in trading spices. The Raja resisted these attempts which resulted in the Portuguese trying to destabilise his rule by negotiating a treaty with his arch enemy, the Kingdom of Kochi in 1503. Sensing the Portuguese superiority at sea, the Raja set about improving his navy. He appointed Kunjali to the task.
The fight between the Raja and the Portuguese continued on until the end of the 16th century, when the Portuguese convinced the Raja in 1598 that Marakkar IV intended to take over his Kingdom. The Raja then joined hands with the Portuguese to defeat Marakkar IV, ending in his defeat and death in 1600.

The staircase captured from a Portuguese Ship on the event of one of Marakkar’s victory over Portuguese. Madonna can be seen engraved on it. It is kept in the Kottakkal juma masjid and used as a platform during the ‘juma’ prayer. 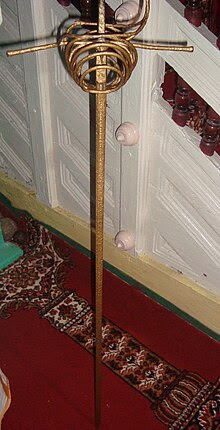 The sword used by the last Kunjali Marakkar at the mosque at Kottakkal, Vadakara