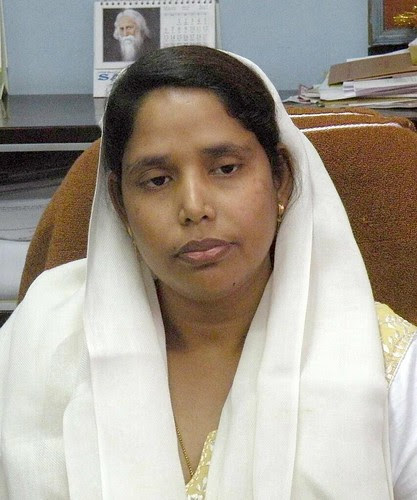 Sabina Yasmin was Sabhadhipati (president) of Malda Zilla Parishad when she contested the Assembly poll in April-May 2011. She is now Congress MLA from Mothabari constituency in Malda district. She has also become minister – first Muslim woman to get the position in West Bengal after Independence. Sabina was member of Rahul Gandhi’s young brigade. Her husband Mehbub Alam is a small businessman.
Sabina has Masters Degree from North Bengal University. She passed Madhyamik (Secondary) Examination in 1994 from Kaliachak High School in Malda. Then she got admission at Women’s College and passed Higher Secondary in 1997. She completed her Graduation from Gaurh Mahavidyalay in 2000 and did Post-Graduation from North Bengal University in 2002.
In 2008 Sabina fought as Congress candidate in Zilla Parishad Election from Kaliachak-1. She defeated Left Front candidate Rekha Bibi by 8999 votes. After the victory, she was elected as the district president (Sabhadipati) of Malda Zilla Parishad.
For Assembly election 2011, Rahul Gandhi recommended her name. She contested from Mothabari constituency and won by 6020 votes. Her rival candidate was Naimuddin Sheik of CPIM.

Sabina Yasmin resides at Karai Chandpur village in Malda. The 33-year-old is part of the Rahul Gandhi team. Her husband Mehbub Alam is a small businessman.
Yasmin holds Masters degree from North Bengal University. She completed her Graduation from GaurhMahavidyalay in 2000 and cleared post-graduation from North Bengal University in 2002. Six years later, she began her political career.