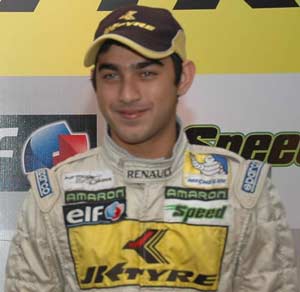 Armaan Ebrahim (Tamil: அர்மான் ஏப்ரஹிம்; born May 17, 1989) is a car racer from Chennai, India. He is the son of the ex-Indian F3 champion Akbar Ebrahim.

Touted as the most promising racing driver in India today, Armaan Ebrahim started his career in karting and became Formula LGB Champion in 2004. He later moved to Formula BMW Asia for the 2005 season. During the same year he represented Team India in the A1 Grand Prix Championship, driving in 6 races, before the team was disbanded due to lack of funds. Armaan continued his racing during the summer in the UK, racing in the Formula Renault UK Championship, one of the most competitive junior formula in the world. Due to the tremendous promise he showed in his maiden season of A1 Grand Prix and his excellent performances in the UK during the summer, he was nominated to drive for the A1 Team India in the 2006–07 season.
He drove for the DPR team in the 2008 GP2 Asia Series.
On December 12, 2008 Ebrahim was announced as the first (and ultimately, only) Asian driver to sign up for the rebirth of FIA Formula Two in 2009, driving car number six. He finished seventeenth in points, with two sixth-place finishes at Brno being his best results.

The Formula Two Website rated Armaan as the "Driver with the Best Race Form". On an average Armaan overtook 8 cars per race in Formula 2. The second best driver Edoardo Piscopo who managed an average of 5.
Armaan is popular in the Indian media and featured on a special programme on national television with former F1 superstar David Coulthard, during the latter's visit to India in October, 2009.
Armaan is sponsored by JK Tyre, Amaron, Red Rooster Racing and by the Foundation of Indian cricketing star Yuvraj Singh (Yuvraj Singh Foundation).

India's first Formula 1 driver, Narain Karthikeyan once said "Armaan is amazing on the track. He is the next big talent from India".