He was born in the village Peyara, 24 Pargana, West Bengal (now in India). His father Mafizuddin Ahmed was a warden of a shrine.

Muhammad Shaidullah passed his school finals (known as Entrance examination at that time) in 1904 from Howrah Zila School. In 1906 he passed the FA exam (equivalent to HSC) from Presidency College, Kolkata. He received the Bachelor of Arts degree with Honors in Sanskrit in 1910 from City College, Kolkata, and Master of Arts in 1912 in Comparative Philology from the University of Calcutta. He also received a PhD from Sorbonne university.

Shahidullah's teaching career started in Jessore Zilla School where he taught between 1908 and 1909. He also worked as the headmaster of Sitakunda High School, Chittagong between 1914 and 1915. However, he returned to research and worked as Sharatchandra Lahiri Research Fellow (1919-21) under the supervision of Prof. Dinesh Chandra Sen at the University of Calcutta. Subsequently, Shahidullah joined the University of Dhaka as a lecturer of Sanskrit and Bangla languages in 1921 . His years at the University of Dhaka constituted the most important period of his life. During his teaching and research career there, he explored the origins of the Bangla language. In 1925, he was able to show that Bangla originated from Gaudi or Magadhan Prakrit (or derivative of Sanskrit).
To pursue his doctoral studies, Muhammad Shahidullah went to France and Germany in 1926. He learnt Vedic Sanskrit, Buddhist Sanskrit, Comparative Philology, and Tibetan and ancient Persian language at University of Paris, and ancient Khotni, ancient Vedic Sanskrit and Prakrt at Freiburg University in Germany. He received his doctorate from the Sorbonne in Paris in 1928 for his research on the distiches of the Charyapada, the earliest extant specimens of Bangla language.
Dr. Shahidullah was the first Indian Muslim to receive the doctorate degree. He also received a diploma for his fundamental research in phonetics from the University of Paris the same year. After completing his doctorate, he returned home and started teaching. When the Sanskrit and Bangla Department was split into two separate departments, he became head of the Bangla Department in 1937 and retired from this position in 1944.
He became principal of Bogra Govt. Azizul Haque College after retirement. He then rejoined the Bangla Department of the University of Dhaka as a supernumerary teacher and taught there for six yeas as departmental head and dean of the Faculty of Arts and International Relation Department (as teacher of French language) (1953-55). He also worked as head of the Bangla and Sanskrit Department of the University of Rajshahi from 1955-58. 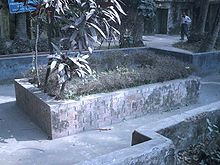 Dr. Shahidullah's tomb in Dhaka University campus
Muhammad Shahidullah explored deep into the history of old and middle Age Bangla literature. He wrote many books on these subjects, and his research answered many of the interesting questions about specific properties of Bangla language and literature.
He also took active interest in Bangla folk literature. Apart from research, he wrote for children. He also translated and edited a number of books. Noteworthy among his books are Sindabad Saodagarer Galpa (The stories of the merchant Sindbad, 1922), Bhasa O Sahitya (Language and literature, essays, 1931), Bangala Byakaran (Bangla grammar, 1936), Diwan-i-Hafiz (Poems of Hafiz, translation, 1938), Shikwah O Jawab-i-Shikwah (Questions and their answers, translation from Iqbal, 1942), Rubaiyat-i-Omar Khaiyam (Quatrains of Omar Khayyam, translation, 1942), Essays on Islam (1945), Amader Samasya (Our problems, essays, 1949), Padmavati (Volume I ed, 1950), Bangla Sahityer Katha (History of Bangla literature, Volume I in 1953, Volume II in 1965), Vidyapati Shatak (Collection of Vidyapati's songs, text analysis, 1954), Bangla Adab Ki Tarikh (History of Bangla literature, essays, in Urdu, 1957), Bangla Sahityer Itihas (History of Bangla literature, 1957), Bangala Bhasar Itibrtta (History of Bangla language', 1959), Qur'an Sharif (The Qur'an, 1963), Amarkabya (Unforgettable poetical works, 1963), Sekaler Rupkatha (Fairy tales of ancient time, 1965), etc. The dictionary of regional dialects published under his editorship is another noteworthy work associated with him. He edited Traditional Culture in East Pakistan in collaboration with Muhammad Abdul Hai. His Buddhist Mystic Songs (1960) is a translation and an edited version of the Charyapada. He was the first to note that Charyapada is completely written in Bangla and to highlight the religious philosophy of the work. He was buried in 'Shahidullah Hall' in the University of Dhaka.
Dr. Shahidullah is also credited with formulating the rules for the reformed Bangla Calendar.