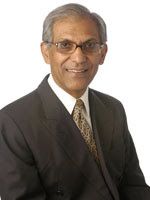 Salman Haidar is a former Foreign Secretary. He served as the Indian ambassador to the United Kingdom, China, and Bhutan, and as first secretary and deputy to the ambassador in Afghanistan.
He also served as head of the Diplomatic Service, Secretary East, and spokesman for the Ministry of External Affairs and later chief of protocol, among other diplomatic positions.
In 1977–80, Amb Haidar was the minister/deputy permanent representative of India at the United Nations in New York. He also writes a weekly column on political affairs for The Statesman, since 2000.
Haidar received a B.A., with honors, in English from Delhi University and a B.A., with honors, in English from Cambridge University.

Ambassador Salman Haidar served as India's Foreign Secretary under the government of Prime Minister I. K. Gujral in 1995-7. During that time, he was a key figure in negotiations over issues that had troubled India's relations with regional neighbors for decades.
Pursuing a set of principles that came to be known as the "Gujral Doctrine," India signed breakthrough agreements about hydroelectric power with Nepal and shared water management with Bangladesh. Similarly, India undertook meaningful negotiations with China over the line of actual control along the Sino-Indian border and lasting ground rules with Pakistan for dialogue about a broad range of contentious issues between them.
Ambassador Haidar will discuss the general approach adopted during these important negotiations, some of the pitfalls and dilemmas encountered along the way, as well as the doctrine's ongoing significance for India's regional relations.